In a world of overly grim and self-serious comic book heroes, FAITH is a ray of sunshine. FAITH #12 continues the title character’s long streak as the most relatable character in comics.  She is a comics and pop culture fan who becomes a superhero herself. However, the series does not always succeed in balancing compelling, serious super-heroics with a lighthearted character study. Valiant’s FAITH is very meta: the sheer number of self-referential quips and pop culture references are astonishing. These aspects make the books fun, but they also make readers unlikely to take any of the series’ comic book threats seriously. As such, FAITH stories are often lackluster in relation to her character development. It is a difficult task to make a book that wants to be a typical superhero book while also subverting all the tropes of a typical superhero story.

Unlike previous issues, FAITH #12 does not try to incorporate a typical action-packed superhero epic. FAITH #12’s lean towards absurdism and pure comedy is a welcome progression for the series. The introduction of a quirky and entertaining new supervillain team eclipses any significant plot machinations. Overall, this creative team of writer Jody Houser and penciler Joe Eisma has crafted a funny and light comic that embraces FAITH’s off-beat nature. FAITH #12 feels like a turning point for the series. It is no longer trying to be a typical superhero comic, but instead is being true to its character. 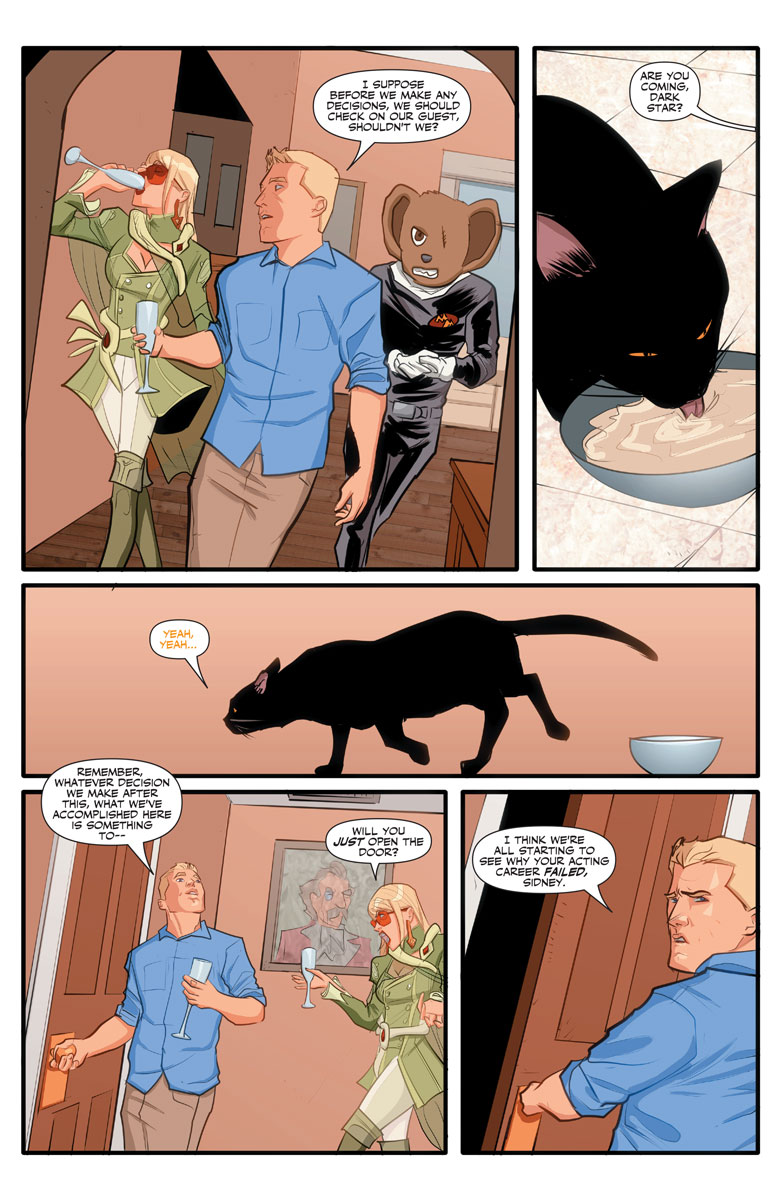 In FAITH #12, the titular hero is being held hostage by a dastardly team of villains calling themselves The Faithless. She is tied to a chair and her powers are dampened by alien technology. Faith only has her wits to save her. The plot is incredibly simplistic, but it paves the way for a hilarious series of confrontations. One-by-one, each villain must guard Faith. She attempts to relate to each villain – Chris Chriswell, Sidney Pierce, Murder Mouse, and Dark Star. These scenes feature FAITH’s signature pop culture-laden dialogue with a healthy dose of heart thrown in. Houser knows that deep down Faith is a good person as well as a hero. Faith tries to connect with the villains on a personal level. Finding out what makes them tick is not only important for her escape but also for her development as a character. 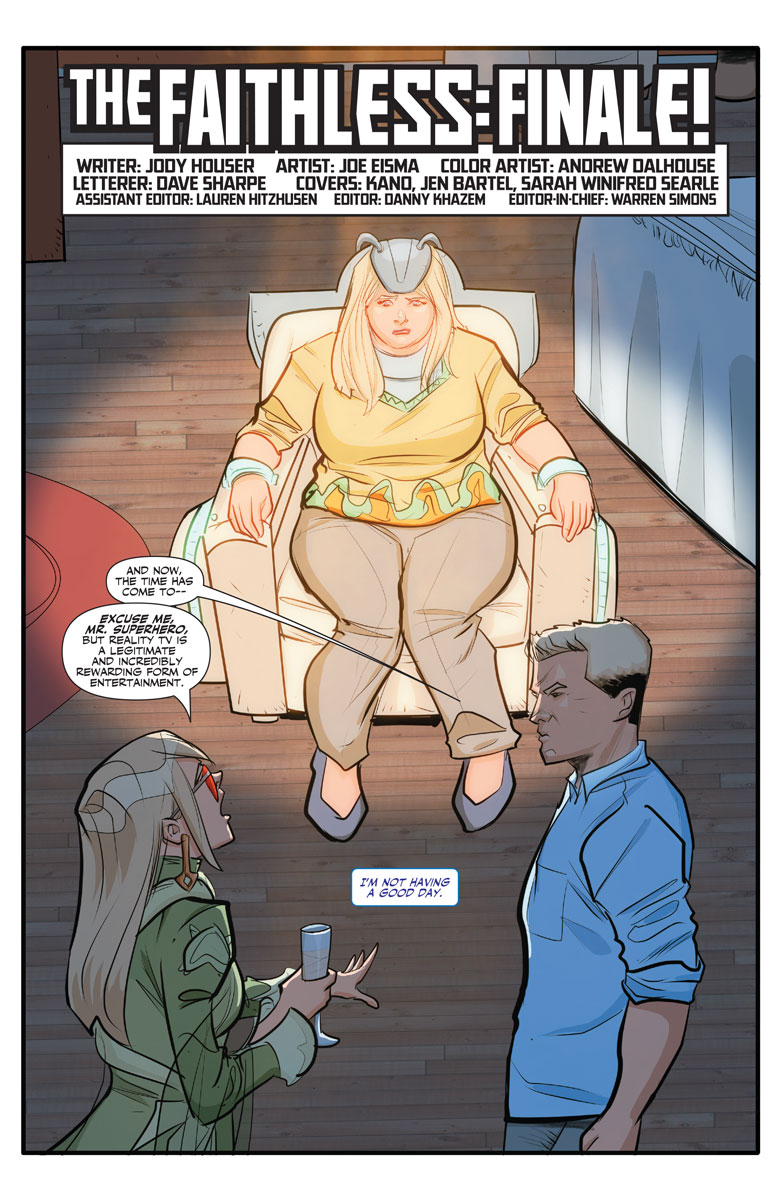 The four villains are ridiculously inept yet fleshed-out characters. Houser makes each villain go beyond the classic tropes she or he parodies. Chris Chriswell is formerly an action hero and currently a desperate Lex Luthor wannabe. Dark Star is a psychic demon in a housecat’s body who is flirting with alcoholism. Sidney Pierce is an undercover alien who is more connected to humanity than she lets on. These three villains are all a little more complicated than they originally appear.

The real standout, though, is Murder Mouse. He is a high-tech burglar and Comic Con fan, but he is also the perfect foil to Faith. Murder Mouse is a comic book fan who got caught with the wrong crowd. The same thing could have happened to Faith. Faith relates to him as a person with similar interests. She helps Murder Mouse better understand his choices.  She does not see him solely as a villain. Her connection and banter with Murder Mouse is a great way to illustrate how Faith’s character has progressed. 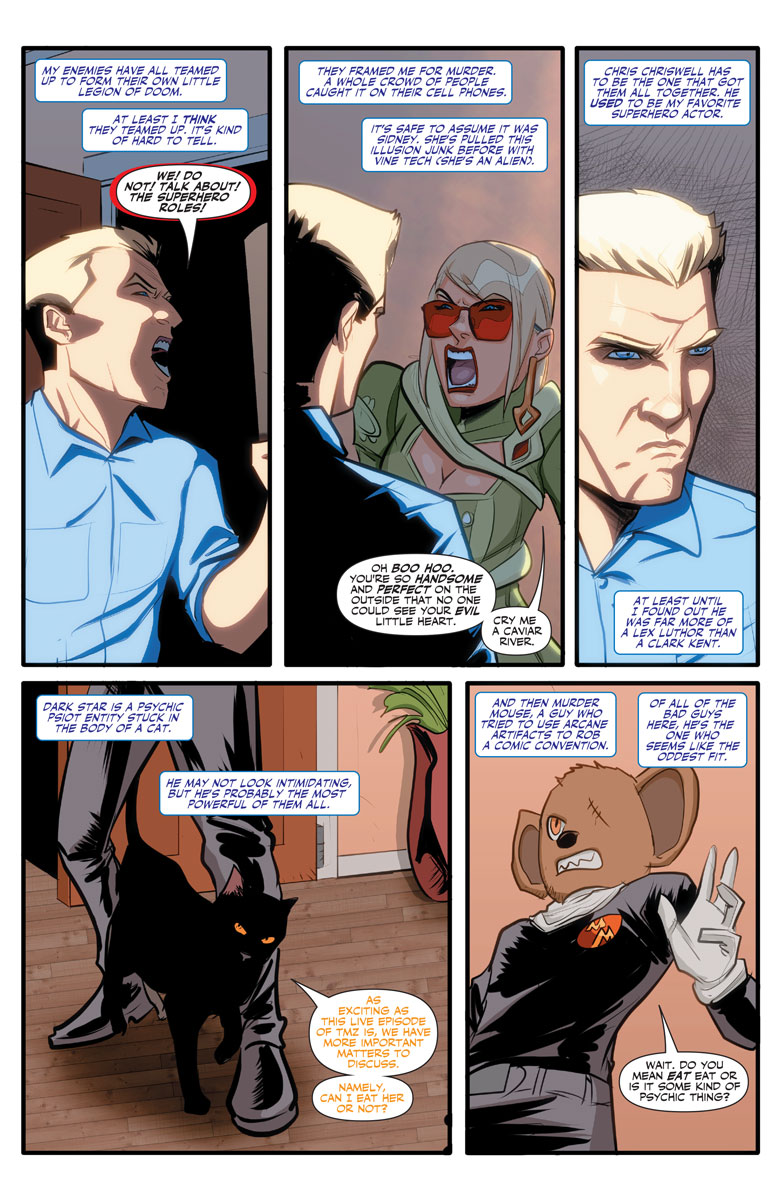 READ: Interested in more empowering female role models in comics? Here is The legacy of THE LEGEND OF KORRA!

One slightly disappointing aspect of FAITH #12 is its abrupt, anticlimactic ending. After all the quippy dialogue and fun zingers, the issue just ends. I won’t spoil the deus ex machina: “The Faithless” has been a multi-issue arc. It is disheartening to see it end with little resolution. This is still a great issue because the dialogue and characterization are so sharp, though the plot is really a second thought.

Despite having very little action, the issue is vibrant. Joe Eisma’s art in FAITH #12 is bold. He utilizes a yellow palette that really makes the world pop. It is visually appealing and true to Faith’s cheery personality. However, Eisma sacrifices texture for bright, solid shapes. While his character models are sometimes too blocky and undetailed, this style is great for positioning and emphasizing characters. In scenes with multiple characters, each one is distinct.

Murder Mouse stands out once more. His is one of the most interesting villain portrayals I have ever seen. Eisma’s ability to transform the character’s body language from menacing villain to timid regular guy is astounding. It adds a lot of depth to the character. Eisma’s art is a reflection of the FAITH series: poppy and bold while also being approachable. Overall, despite making some characters’ faces hard to read, Eisma’s art allows for each character to stand out. 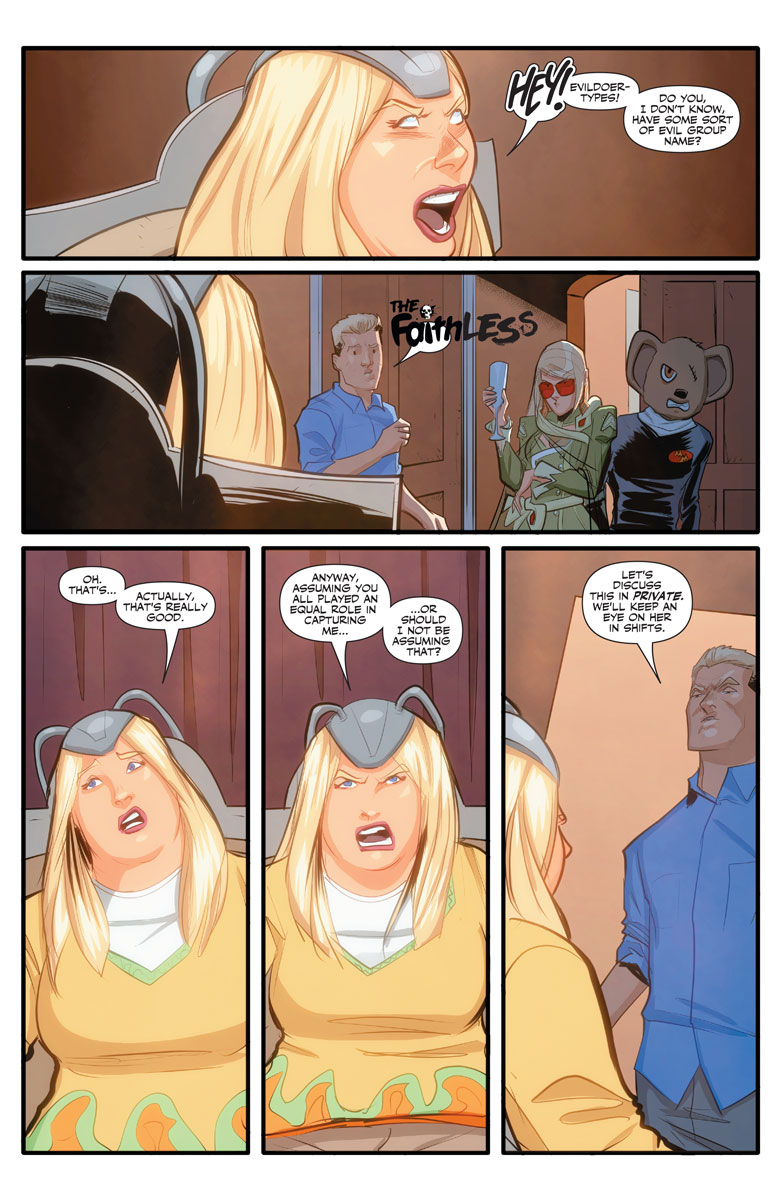 READ: Like classic heroes? Take a look at our article Does Whatever A Spider Can: SPIDER-MAN 3 Is Better With Hindsight!

FAITH #12 relies heavily on its fun characters. The issue is silly in all the best ways. I hope that future issues of FAITH embrace a more free, character-driven structure as opposed to relying on superhero plot tropes. Faith does not need to battle big threats or go on epic adventures. Here, she had one of her most interesting issues of all time just sitting in a chair. Overall, this issue is a welcome addition to the FAITH series, despite being a slightly unsatisfying end to an arc. If nothing else, it is a really enjoyable read.