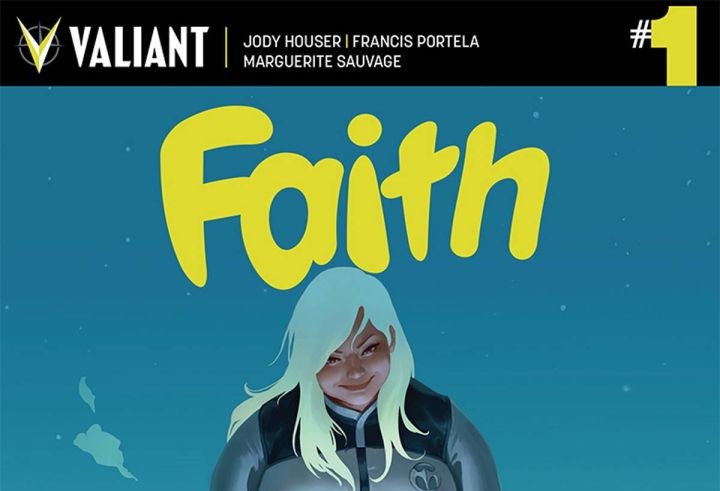 Summer Smith has a secret. She’s really Faith Herbert, the superhero Zephyr and former member of the Renegades. She has faced many threats in her life and has saved the world on more than one occasion. Now, she faces the most daunting task of all: trying to live a normal life.

I’m pretty new to the Valiant Universe, so I have no real knowledge or backstory for Faith. While picking up a number one can be a great jumping-on point, it can also be daunting being introduced to a character that has some history.

Fortunately for me, apart from one or two references I didn’t get, FAITH #1 was pretty easy to follow. That said, it wasn’t the story that made me enjoy this book, though that certainly helped. More important was the totally awesome character of Faith herself. From her style, her look, and her personality, she totally won me over.

READ: We look back at the final Valiant issues of 2015 before previewing this year’s comics!

Plus-Size female protagonists are rarely featured as the main character in a book. They’re usually on the side-lines as the hilarious side kick or the ineffectual hero. This comic could very easily have been an out-and-out comedy, about a superhero who has weight issues, but Faith gives the middle finger to those conventions and soars above it all. She is confident, self-assured, warm-hearted, kind, funny, smart, and also a pop culture expert/nerd. She’s not the butt of jokes; she’s the one who lights up the room, who enjoys great conversation with her work colleagues, and who spends hours talking sci-fi with an online friend (Mark), whom she may have a crush on. 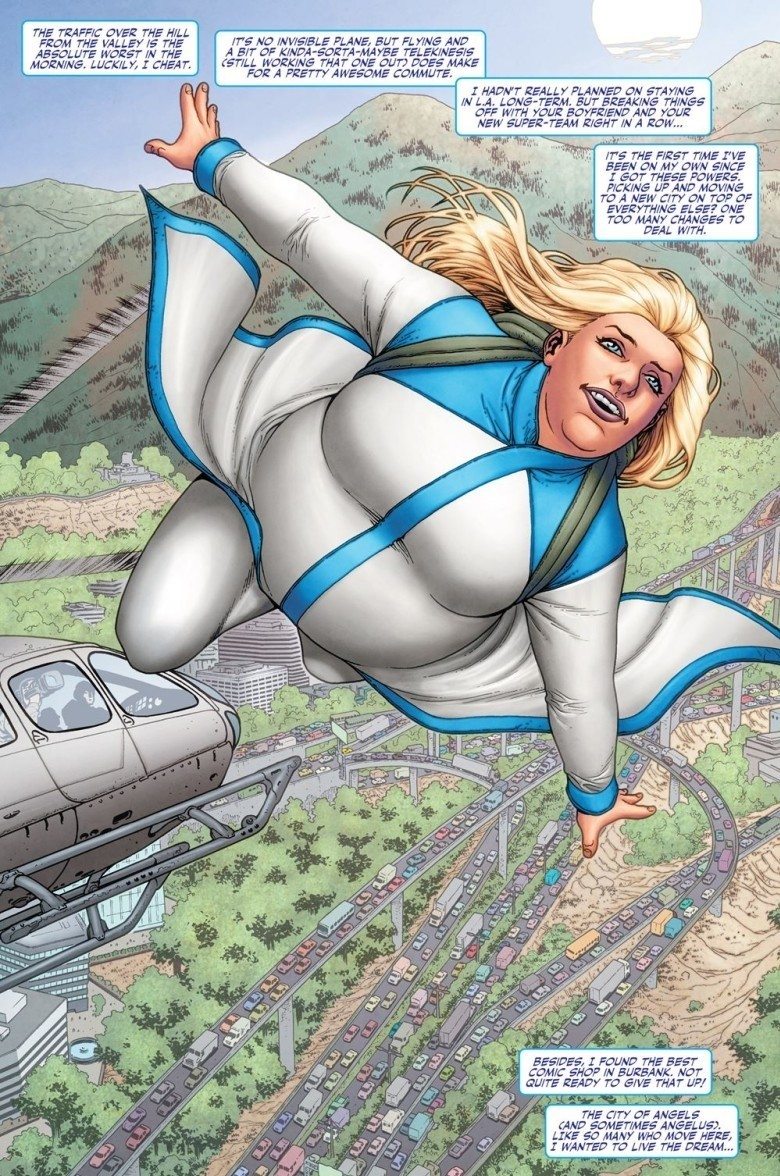 She also hides behind a disguise, almost in a Clark Kent–Superman kind of way, which is understandable. But, she uses this not so much to keep her superhero persona a secret, but rather to explore life on her own terms. Jody Houser writes a character that comes across as enthusiastically infectious to be around, with a superb knowledge of pop culture from both the U.S. and the U.K. (I’m looking at you, Dr. Who and Red Dwarf references!). She’s utterly likable and honest and adores being a superhero.

READ: MS. MARVEL is another brilliant superheroine that deserves your attention! Check out our review of issue #3 here!

Francis Portela, on main art duties, draws a beautiful figure of Faith soaring above L.A., completely in her element and happy with life. It is sweet, and encouraging, and wonderful. Andrew Dalhouse’s colors are light and full of warmth. This is not a hero, or story, set in the shadows, but out in L.A. beneath a warm sun. 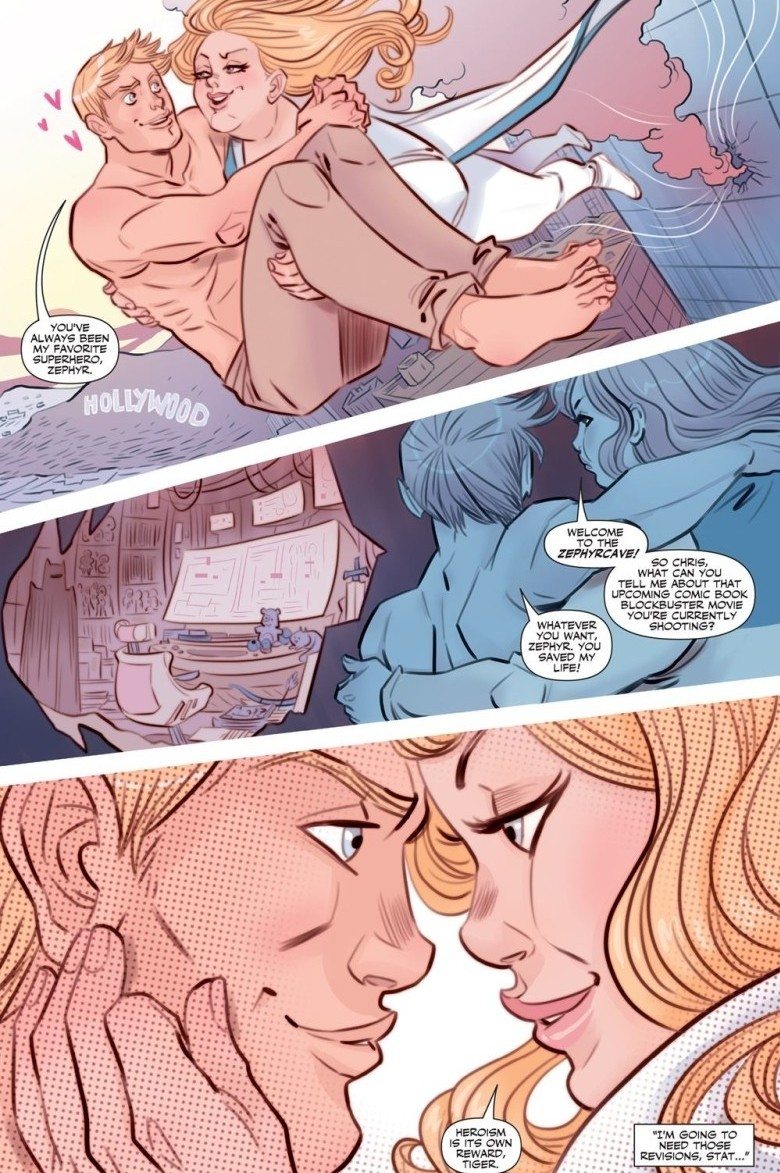 Perhaps most clever was the use of Marguerite Sauvage as artist for the fantasy sequence art. Part cartoon, part fantasy, it gives us even further insight into Faith’s thought process and imagination. And, in a lot of ways, it’s relatable. Who here can honestly say they haven’t daydreamed of being a superhero, stopping a villain, or saving the girl (or in Faith’s case, boy)? She has the same hopes and aspirations as the rest of us, despite her powers, and it’s amazing to see a classic superhero story so well executed. The closest reference I have to encountering someone like Faith, is Kamala Khan, Ms. Marvel herself. Boy, would they get along like a house on fire.

The superhero antics in this issue are fun. At one stage Faith ends up delivering a lecture to a gang of puppy-nappers which is hilarious in it’s execution. But that scene also serves to show how much she cares and how kind-hearted she is.

Like I said, the story was easy to follow. There wasn’t much to it beyond introducing Faith and her cast of characters, which it did so well. There were elements of a plot, but nothing too fleshed out yet. Luckily, we have plenty more to go. This is a genuinely good read, so get yourself a copy of FAITH #1 and say hello to your new favorite superhero.

VISIT: Check out our Valiant forum to discuss FAITH #1!

Enjoyed the issue? Let us know what you think in the comments section below!