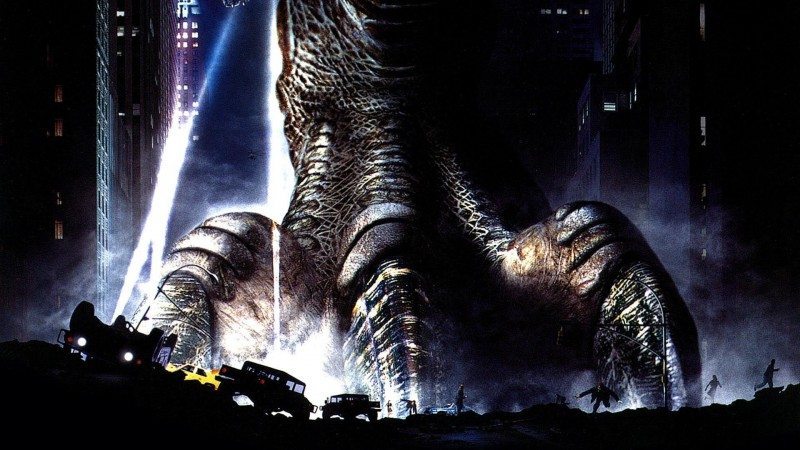 The term kaiju, is something most of us have heard before—especially those at least somewhat into Japanese popular culture. But what are kaiju, exactly? The direct English translation of kaiju is the singular ‘monster’ or plural  ‘a group of monsters’ depending on how it is used in a sentence, but the term also refers to a Japanese film genre. The first of this genre arose in 1954, with the now-famous character GOJIRA, and we saw its move to America in the 1998 film GODZILLA and its 2014 remake. For Americans, these GODZILLA films (’98 and ’14) and PACIFIC RIM  are the first things that come to mind when they hear the word kaiju.

I remember when GODZILLA 1998 came out.  As a kid, my uncle had made me watch all the old GOJIRA movies and read the GAMERA comics (about a kaiju in the form of a giant saber-toothed turtle). So when the American version was released, I was a rather excited eight year old. Now when I think about the movie, however, I recognize that it was a disaster on essentially all levels. The writing was bad, the design has been almost universally despised, and the plot is so awful that I groan out loud just remembering it. The decision to make Godzilla female and have the destructive horror live on through birth (the egg shot at the end) is fun to consider, but that idea is about all the film brings to the table. I’d re-watch it to comment on the acting but I don’t want to be seen checking it out at the library. It was that bad and every single one of us knows it. This movie is a failure in pretty much every way.

PACIFIC RIM, on the other hand, got mostly stellar reviews. It had giant robots, monsters, and Guillermo Del Toro. What wasn’t there to like? After seeing it, I quickly jumped on the ‘would we be drift compatible?’ band-wagon and consumed all of that fun fandom-crossover fan-art. I read PACIFIC RIM fanfiction and swooned over Maki Mori. It did great in box offices and gained a huge fan follwing.

READ: If you love PACIFIC RIM, check out Kristine’s look at misogyny in the film!

GODZILLA and PACIFIC RIM are two films fifteen years apart with radically different concepts and strength of storyline. What do they both have in common? They rode on the concept of the kaiju film.

GODZILLA 1998 took a classic Japanese character and rebranded it. PACIFIC RIM took inspiration from countless Japanese kaiju and mecha media (Jaegers remind me so much of GUNDAM WING), going so far as to name the baddies Kaiju. I’ve no doubt that the creators of both films had respect and admiration for the kaiju film-genre. However, American-made movies simply cannot be coined as kaiju films.

One of the staples of the kaiju film industry was the genre’s relationship—Japan’s relationship—to nuclear testing and nuclear bombing.  It was born out of a culture’s fear of nuclear weaponry and the aftermath of living through nuclear horror. Kaiju is a Japanese-specific genre. GOJIRA came out in 1954 as a direct result of the Daigo Fukuryu Maru (Lucky Dragon 5) boating incident. Lucky Dragon 5 was a fishing boat exposed to fallout from hydrogen bomb testing at Bikini Atoll. These tests were fifteen times more powerful than the bombs dropped on Hiroshima and Nagasaki. Over 800 fishing boats were exposed and the fishing industry in Japan plummeted. Events such as these have always sparked the creation of films about them, like BLACK RAIN, a film about Hiroshima, and COUNTRY OF HOPE, a film in response to the more recent nuclear reactor breakdowns.

Kaiju became considered a genre after the release of GOJIRA. Certain aspects became essential to kaiju film; like the ineffectiveness of the military and police and the complete and utter destruction they inflicted. It’s not difficult to see the direct correlation of nuclear war and kaiju film genre or why the films were so abundant and popular in their time. These movies were the embodiment of the anxiety and fear that plagued Japanese society. It was a fear the country shared, a fear that reached beyond hierarchical structures in society- everyone felt the pain and the loss.

GODZILLA 1998, on the other hand, was so much of an insult to the character Gojira and genre of kaiju, the term ‘GINO’ (Godzilla in Name Only) was coined to make sure people knew the difference between Toho’s Gojira and Sony’s re-imagined Godzilla. Godzilla, in the 1998 film, became the monster she was through genetic mutations due to nuclear testing via the French. She was a mutated lizard who just kind of destroyed stuff. Sony’s Godzilla was a monster, not a kaiju. There was no social commentary or respect for the history that created kaiju in the first place. It was so awful that Toho took back the rights they gave Sony for Godzilla, hence the sixteen year gap between both American GODZILLA films.

The failures of GODZILLA 1998 are glaringly obvious. PACIFIC RIM, however, is nothing like GODZILLA 1998. So what did it do wrong? PACIFIC RIM uses the term Kaiju in reference to the deep-sea monsters, and it is a fun reference, but now, looking at the film more in-depth, it doesn’t sit right with me.

In the film, American mecha Jaeger Gipsy Danger gets an additional nuclear reactor built in during its re-model. Oh yeah, and a nuclear bomb is used to kill the remaining Kaiju at the end. The genre of kaiju was born in response to the anxiety and fear of nuclear destruction by America, so to have the nuclear-fueled-American-piloted Jaeger defeat the Kaiju using nuclear power is pretty messed up. Intentional or not, the film’s usage of Japanese genres (mecha and kaiju) followed by the destruction of Kaiju via nuclear weaponry seemed a bit of a slap in the face. Now, don’t get me wrong, I adore PACIFIC RIM. However, it’s important acknowledge a movie’s failures. Whatever PACIFIC RIM is, it is not a kaiju or mecha film—it’s an American movie.

LOOK: Watch GAME OF THRONES? Check out this fantastic read on the religion in GoT!

The main difference between GODZILLA ’98 AND ’14 was that the ’98 version made no attempt to stay true to the GOJIRA franchise. GODZILLA ’98 attempted to re-imagine the character of Godzilla, one of the reasons it was a massive failure. The monster in the ’98 film was just a mutated lizard and eventually met its demise via the military. Godzilla in the ’14 film, however, didn’t stray like the ’98 version did. While certainly not a perfect film, it kept the spirit of Godzilla intact—like in GOJIRA the monsters were awoken by nuclear testing and only died at the hands of other monsters. These are staples of the kaiju film genre that the ’14 film made sure to include, while the ’98 version ignored them completely.

CLOVERFIELD, like GODZILLA 2014, is another success. In American monster movies, beasts are able to be stopped by police/military and have the potential to come from anywhere (which is one of the main differences from Japanese kaiju). They aren’t tied to nuclear culture. Clover is awoken by a Japanese mining company and in its confused state, destroys Manhattan and is then killed by the American military. It’s an appropriate throwback to both Japanese kaiju and American monster movies. Part of what made CLOVERFIELD so successful was that it never labeled itself as a kaiju film- it was a monster movie, through and through. This allowed it to pay homage to kaiju films without appropriating them.

CLOVERFIELD and GODZILLA 2014 show you can create a movie with inspiration from another country’s genre with respect by acknowledging the history and abiding by the rules.

It’s time for Western movies to stop picking and choosing what story-lines they think they can alter and ignoring the history behind the genre. By not doing proper research or, worse, ignoring the research, a movie meant for entertainment can come close to being culturally appropriative. Japan has developed the kaiju genre directly in response to their society post-bombings and post-Lucky Dragon 5, both of which were done by the United States. When American films ignore America’s history, especially when it concerns violence, it can be an act of violence itself. While fun films (either to watch or laugh at, your choice), PACIFIC RIM and GODZILLA 1998 are not kaiju films. Western films never can be.