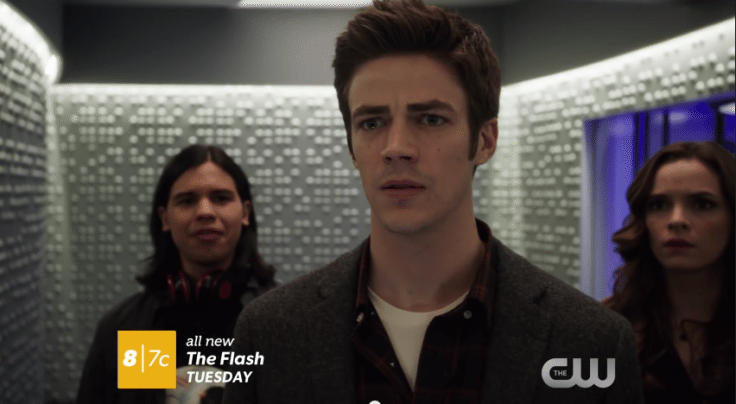 The episode opens with Barry running to Coast City to pick up some pizzas for Joe, Cisco, Eddie, and Caitlin. He is doing a voice-over describing how he’s getting faster everyday and that he believes it has something to do with his past. He feels as if his past is catching up with him, and this will parallel Eobard Thawne in the sense that his past catches up to him in this episode. At Joe’s house, the gang discusses what they plan on doing in order to get more information on who Harrison Wells really is. Joe and Cisco are planning to head to Starling City to investigate the death of Harrison Wells’ late wife Tess. In the meantime Barry and Eddie work at the police station as usual, while Caitlin covers for Cisco. Speaking of Caitlin, she is not on board with taking Harrison Wells down. She still views him as the man who stood by her after her fiancé “died” and her career basically ended. As she stated in the episode, she’s going to need some poof.

The villain this week was Hannibal Bates aka The Everyman. He has the ability to transform into anyone, but only after having direct physical contact with them. He uses this ability to steal jewelry and attempts to sell it. Eddie and the Flash are on at the scene where Eddie attempts to subdue Everyman but ultimately fails. Before the Flash can apprehend the metahuman, he transforms into a teenage girl and runs off!  Back at STAR Labs Dr. Wells advises caution to not let Bates touch Barry. Everyman’s shape shifting ability could allow him to mimic Barry’s super speed.

Meanwhile in Starling City, Cisco and Joe meet with Captain Lance to investigate the location of the accident that killed Tess Morgan 15 years ago. Before they leave, Laurel comes in and pulls Cisco aside in a private police room. She reveals herself as the Black Canary and asks if he can modify Sara’s sonic blast device. He assures her that he can and will make some modifications. 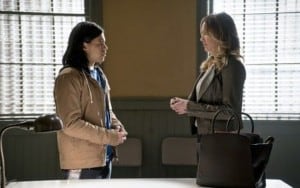 At Central City, Barry and Eddie visit the grandmother of Hannibal Bates in order to get more information for the case. As it turned out, Bates was impersonating his own grandmother! A chase commences, but Barry is unable to use his speed because of the danger of Everyman getting his super speed and possibly exposing his identity. He runs his usual normal speed, which needless to say, is very slow.

As the chase continues, Eddie calls for back up, but once they arrive, Everyman is impersonating Eddie and shoots the two police officers on camera! Barry comes too late to the scene, and Eddie is taken into custody. DA Cecil has to pull Eddie from the case, even though Barry brought physical evidence that the bullets did not come from Eddie’s gun.

Things are not looking good for Eddie, and on top of that, Iris is still pissed at him for keeping secrets. She seems to have put those emotions to the side, seeing as Eddie may go away to jail for murder. Barry consoles Iris, letting her know that he will find a way to help Eddie. By “help Eddie,” he means making him a fugitive and having him run away! I understand Barry is distressed at the moment, especially since this situation was bringing back painful memories of his father being punished for another man’s crime, but running away is an obvious sign of a guilty conscience, which would just cause more problems for Eddie. He assures that Barry can and will find a way within the law to get him out of this tough spot.

Back at Starling City, Joe, Cisco, and Lance are at the location of the accident. Cisco pulls out what appears to be a fancy metal detector. While Cisco searches the surrounding area for any strange anomalies, Joe and Lance share a heart to heart discussion about their daughters. In doing so, Lance pretty much informed Joe (and the Flash audience) what has been happening on Arrow this season. I really like how the writers have been filling in fans who only watch the Flash on what has been happening on Arrow, without making it seem too much like an exposition. Eventually, Cisco finds something that’s giving off tachyon particles. After some digging, they find that it’s the body of the real Harrison Wells! Joe implores that Lance not call this in to the station; the less people know about this the better.

Barry is dealing with his own problems as he gets knocked out by Everyman, who is impersonating Eddie once again, and steals Barry’s identity! Thankfully he appears to not have Barry’s super speed, except Caitlin comes over to Joe’s house where the two Barrys are. Mistaking the fake-Barry for the real one, she brings him to STAR Labs and tells him that she found a way to temporality neutralize Bates’ shape shifting abilities.

At STAR Labs, Caitlin begins to synthesize the serum and fake-Barry makes a move towards Caitlin. Initially she is opposed to it, but ultimately she ends up embracing fake-Barry’s kissing! Then Iris comes over and shows both Caitlin and fake-Barry the footage of Eddie killing the cops, and points out that Eddie isn’t left-handed, unlike the fake-Eddie who shot those police officers. After hearing this, fake-Barry attempts to shoot Iris but Harrison Wells tazes him just in time. Iris and Caitlin attempt to take Everymen into custody, but he uses his shape shifting powers to escape.

At Starling City, Joe thanks Lance for everything and suggests making amends with Laurel. Cisco gives Laurel a necklace that should increase the sonic power and the blast radius, and he calls it the Canary Cry. In exchange for his help, she gives him a photo of the two of them, with Laurel dressed as the Black Canary.

The Everyman story wraps up at the airport in a final confrontation with the Flash. Even though Everyman doesn’t possess any special skills outside of shape shifting, he put up a good fight against the Flash. Ultimately the Flash wins and there is footage of Everymen shape shifting, so Eddie is clear to go. After getting out, he embraces Iris and tells her that the secret is that he’s been working with the Flash. The biggest reveal of this episode is when Cisco, Barry, and Caitlin find Dr. Wells’ secret room. They not only find his Reverse-Flash suit, but they also find the article from 10 years from now, The Red Skies Crisis! Next week plans to take it to the next level by unleashing Gorilla Grodd! I’m so excited I can hardly wait! ‘Til then Flash fans!