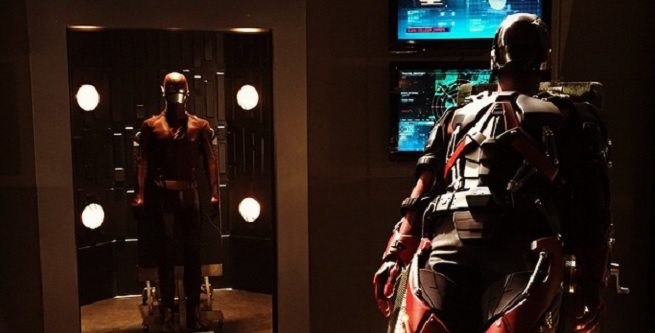 The episode opens with Joe and Eddie on a high speed police chase. Joe requests assistance from the Flash, and since Eddie now knows Barry is the Flash, Joe can speak openly to him, even when Eddie is around. Flash displays more of his cocky attitude; it is always enjoyable to see him acting more like the Flash from the comics. Still, it isn’t long until trouble strikes, when a woman is attacked by a swarm of bees while walking to her car after dark. The following morning, while Joe and Barry investigate her death, Joe puts in Barry’s head that Cisco and Caitlin may be working with Harrison Wells. Obviously the audience knows this not to be true, but Barry spends the majority of the episode questioning whose side they are really on. 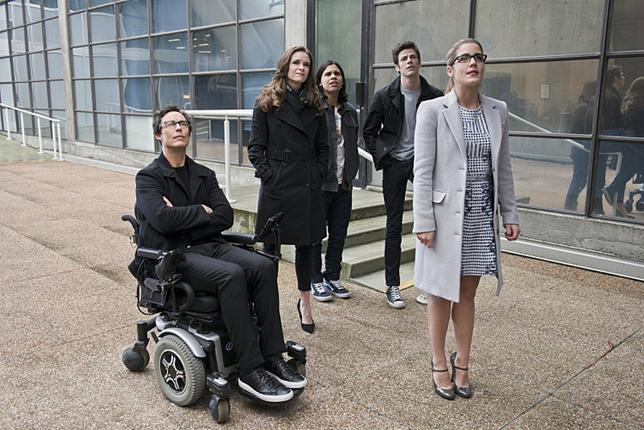 While the Flash crew tries to figure out how the woman was killed, Felicity makes an appearance. She proceeds to bring everyone outside, where Ray makes his entrance from the air! The special effects for the Atom’s flight in this episode far exceed anything we have seen on “Arrow”. This is probably because the SFX team part of “The Flash” is used to bringing their A-game every episode. Ray tells the STAR Labs crew that he comes to Central City seeking help to improve the power source for his suit. Cisco is ecstatic to help Ray and allows Caitlin and Dr. Wells to help stop the meta-human who can control bees.

At the police station, Iris confronts Eddie about his behavior lately. She tells him that she can tell that he is hiding something from her. He tells her that nothing is going on, but she doesn’t believe him. Meanwhile at Jitters, Felicity confronts Barry because she can tell that something is wrong with him as well. He also denies that anything is wrong, and then Eddie comes in asking how Barry can lie to the people he cares about. He also points out that Iris is literally the only person in the main cast who doesn’t know Barry’s “secret”, which is barely a secret at this point. Felicity does one of her trademark awkward quips to Eddie, telling him that lying is a part of the job when working with a superhero. She suggests that they all go out to dinner, considering that they all had so much fun the last time (with Barry fifth-wheeling it). 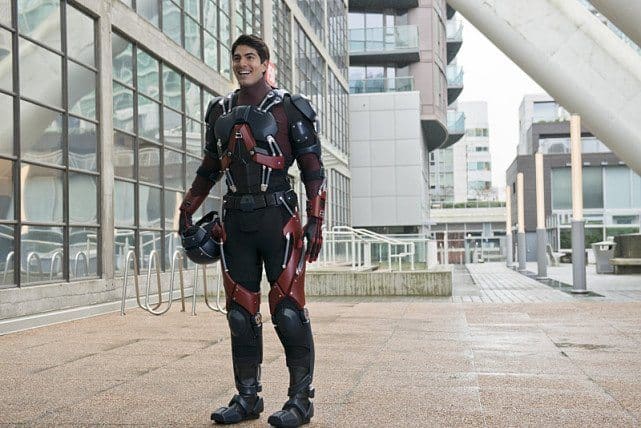 Back at STAR Labs, Cisco and Ray bond over the Atom suit. When Ray says that Cisco is incredibly clever, this triggers his memory of when Harrison Wells said the same thing in the alternate timeline, right before revealing himself as the Reverse-Flash and killing Cisco! This means that Cisco remembers the alternate timeline! He is soon interrupted with a report of another bee attack. He rushes to help guide Barry with a map of the building. The Flash rushes to the victim, but arrives too late. The bees begin to attack the Flash, and he tries to run away, but the bees follow him and attack outside of the building. Cisco uses the defibrillator in Barry’s suit to bring him back to life.

Back at STAR Labs, Barry quickly gets ready for the group dinner date, while clearly showing signs that he is troubled by something. At the dinner date, Iris increases the awkward level to the highest level by using Felicity and Ray’s relationship to guilt Eddie into telling her what he’s hiding. Ray tries to change the subject to telling how jealous he is of Barry getting to work with Dr. Wells. This triggers some upset feelings for Barry and he excuses himself from the dinner table. Outside of the restaurant Felicity confronts Barry about what he’s going through, and to show she can relate to heavy burdens, she reveals the major plot developments happening on Arrow this season. Barry tells Felicity that Harrison Wells is the Reverse-Flash and that he isn’t sure if he can trust Caitlin or Cisco. Felicity then gets a call from STAR Labs; apparently one of the bees that attacked Barry remained in his suit and is now loose in the lab.

Cisco and Caitlin proceed to try and kill the bee with a freaking plasma cannon! I know Cisco is afraid of bees, but that seems like a bit much. Barry comes in at the last moment to save Dr. Wells from the bee. Upon further examination they realize that the bee is a robot. The individual controlling the bees is not a meta-human, but a scientist. The connection between the victims were that they all worked at Mercury Labs; so Joe, Barry, and Dr. Wells decide to pay Dr. Tina McGee a visit. She tells them that her former
employee, Brie Larvan (played by Emily Kinney), is behind the recent murders. They offer to protect her, but she declines, considering that they couldn’t protect her tachyon device.

Back at the restaurant, Felicity gives Barry advice to trust Caitlin and Cisco- they are on his side, and he should tell him what he knows about Dr. Wells. Then Dr. Wells informs the group that Brie plans on murdering Tina after rerouting where the bee in STAR Labs wants to go. The Atom suits up to lure the bees away from Mercury Labs while the Flash stops the Bug-Eyed Bandit at her lair. The flight sequence was incredible and looked on par with something I would see in a movie! Brie and Felicity hack-battle over the control of Brie’s robot bees, which was both exciting and amusing. Felicity and the Flash defeat the Bug-Eyed Bandit, then Cisco and Caitlin save a falling Atom, after he lures the bees into the ocean, which damages his suit. Cisco proceeds to save Ray again when a final bee attempts to sting him. Barry returns the favor for saving his life by using his speed hands as a defibrillator to shock Cisco’s heart back. 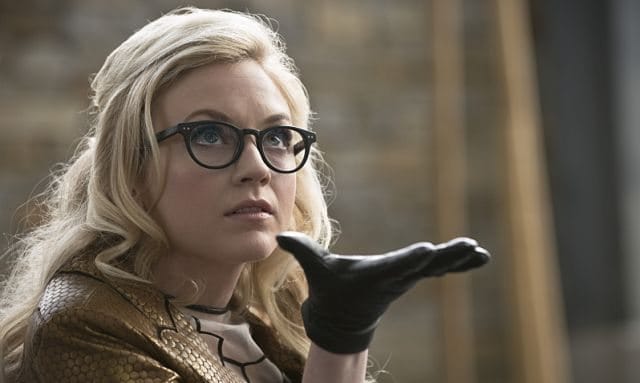 Barry says his goodbyes to Felicity and Ray before they head back to Starling City. Iris visits Eddie at the police station and gives him the ultimatum; tell me what you’re hiding or we are over. The episode concludes with Barry and Joe bringing Caitlin and Cisco to his lab, where he has all the information he knows about the Reverse-Flash and Harrison Wells, proving that they are the same person. Caitlin doesn’t believe it, but Cisco reveals that he has been having nightmares of his death at Dr. Wells/Reverse-Flash’s hands.

This was a good solid episode with some plot development for both “The Flash” and “Arrow”. It was not quite as great when compared to the recent episodes we have seen, but it was still enjoyable. Next week we appear to be getting even deeper into the secret behind Harrison Wells. It’s sure to be entertaining… ’til then Flash fans!