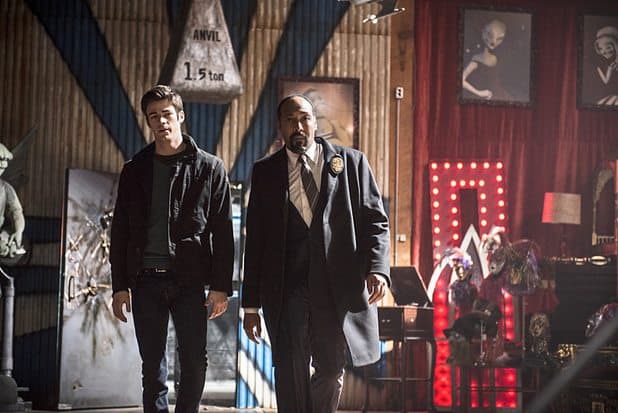 This episode starts off in a familiar setting, Barry’s neighborhood from when he was a child. Suddenly a portal opens and two speedsters come charging through it. The Flash and Reverse-Flash are exchanging blows all the way to Barry’s house. Then we see the same scene from the pilot (and every episode of the Flash) where Barry’s mother is surrounded by the two speedsters. Then the Reverse-Flash charges at young Barry when he comes down but the Flash arrives sooner grabbing Barry and taking him away from the house!

This episode cleared up some more questions the fans had for the character of Harrison Wells, questions that Barry and Joe are anxious to know. The two are discussing what the connection is between Harrison Wells and the Reverse-Flash when bombs attached to parachutes start to rain from the sky. The people within this show have an odd reaction, even without knowing that the presents contain bombs I would still be suspicious. Barry rushes to the public’s safety as the Flash and is soon called to STAR Labs where he is informed that this is the work of the Trickster. At STAR Labs Joe catches everyone up to speed on who the original Trickster was; Jesse James. I love how they used original photos from the 90s Flash TV series for Mark Hamill’s character. 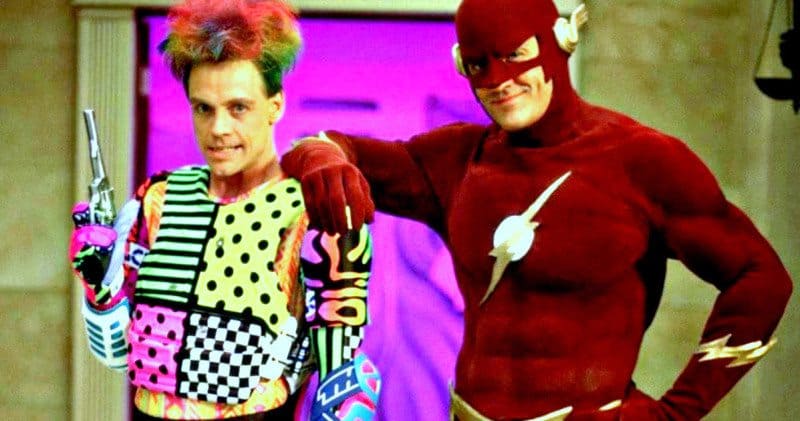 Speaking of Mark Hamill, his performance as the Trickster was superb! Using his iconic Joker voice that he used in the Batman Animated series, he provided fans of several generations with an ample amount of nostalgia this episode. In fact, he even used the famous “I am your father” line from Star Wars on the new Trickster! Apparently the apple doesn’t fall far from the crazy tree. The old and the new Trickster have taken Barry’s father hostage in order to have leverage against the police. It is soon revealed that the two Tricksters are working together to rob all of the wealthy members of Central City at the banquet to re-elect Major Bellows. Threatening to let them die from the poison they had them all drink prior to revealing themselves, the people at the party (including Iris) gave in to their demands.

Not long after the Flash arrives on the scene thanks to Iris, and the original Trickster attaches a device onto the Flash’s wrist. Referencing the movie Speed, the Trickster informs the Flash that if he goes under 600 mph once the device has been activated it will explode! The Flash begins to run as he pleads to the STAR Labs crew to find a solution. Dr. Wells tells Barry that if he were to vibrate his molecules at the right frequency then he could phase through it, thus leaving the device behind him. Dr. Wells then goes on to explain in great detail how to vibrate his molecules and become one with the Speed Force. The Flash manages to get free and rushes back to the banquet, injecting all the infected people with an antidote. He gets the information to where Henry Allen is and goes there to save him. Barry reveals himself to his father even though his father already knew. The two share a moment with each other and his father even gets to see STAR Labs before Joe has to take him back to Iron Heights Prison.

Throughout the entire episode Barry had been acting bitter towards Dr. Wells because Barry believes that he had something to do with his mother’s murder. By the end of the episode Barry is finally able to swallow his anger and put up a friendly façade to fool Wells while he and Joe enlist someone else in their crusade. Barry reveals his identity to none other than Eddie Thawne! The three decide it is best keep Iris away from knowing what happened to Mason Bridge while they try to figure out what is Harrison Wells’ endgame. The episode ends with Barry telling Joe and Eddie that the way Wells described phasing through solid objects, he definitely was speaking from past experience.

“Harrison Wells is the Reverse-Flash,”

If you thought that was some heavy plot development, then get ready to learn about Eobard Thawne’s back-story (or at least some of it). We find the Reverse-Flash running in Barry’s street until he eventually comes to a halt. He pulls up Gideon from his palm and asks it what’s wrong with him. Gideon responds that his latest time jump has depleted his body of the speed force, and that he is now stranded in the past. The Reverse-Flash, filled with rage, rips off his mask only to reveal that it is not Harrison Wells! Flash-forward a bit, and we see a young Harrison Wells with his sweetheart Tess, talking about one day creating the particle accelerator. This moment was short but it did an excellent job of making the audience care for this couple and root for their relationship. Off in the distance we see Eobard Thawne watching the happy
couple. Later on we find young Harrison Wells driving with Tess sharing a lovely moment only for it to be cut short by the crashing of the car, caused by none other than Eobard Thawne. After waiting for Tess to die, ignoring the pleas from Harrison Wells, Eobard pulls him out of the car. He says to him, “Harrison Wells, you create the particle accelerator in 2020. I need that to happen sooner,” Thawne pulls out a device which he hooks up to Wells and then himself. This device drains the life energy of the real Wells and changes Eobard into Harrison Wells! 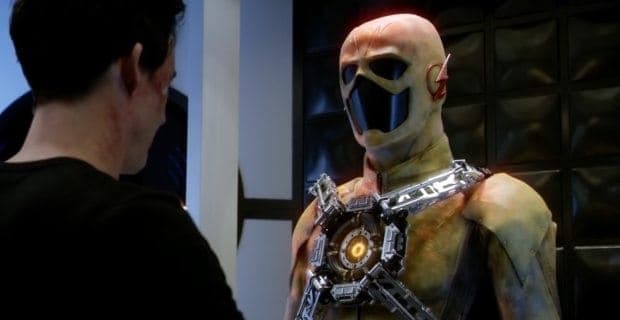 There were many interesting developments this episode. It was fascinating to know more of Eobard Thawne’s back-story. There is still so much that we as the audience don’t know yet about the character or how he plans to obtain his goal. Watching Barry conflict over his feelings because of Wells made an already likable character even more human. There will be no Flash next week, but when we return there will be a superhero cross-over featuring the return of Felicity and the arrival of some new characters to Central City; The Atom, The Black Canary, and Detective Lance. I’ll see you then, Flash fans!