When I bought my ticket for JUSTICE LEAGUE, I was not sure what to expect. I questioned whether DC would strike while the iron was hot. That is since they’d just released the very successful WONDER WOMAN, which significantly side-stepped their films’ tendencies to flop at the box office. While I thoroughly enjoyed the film, JUSTICE LEAGUE didn’t blow me away. However, one of the characters did — and quickly, might I add. JUSTICE LEAGUE’s Flash, played by Ezra Miller, was clearly the standout hero in the movie.

The Flash Ran The Show (Literally)

“I do competitive ice dancing,” the Flash offers.

“It’s what they use on space shuttles to prevent them from burning up on re-entry,” Batman retorts.

“I do… very competitive ice dancing.”

It seems that the Flash has these comedic moments with just about every other character in the League. When the Flash first meets Wonder Woman, he says,

Later on, he extends his fist to Cyborg for a fist bump, but Cyborg doesn’t return the gesture until the very end of the film. Lastly, in one of the end credit scenes, the Flash and Superman ready themselves for a race to the Pacific ocean to see who is faster.

WONDER WOMAN Is Naive, And That’s A Good Thing

Consider the Flash’s character traits: he’s socially awkward, he carries an entire box of pizza around as a snack, and he hates insects. Now imagine coming across someone on Tinder with this written in their bio. It’s certainly not, “I’m the captain of the football team who enjoys long walks on the beach,” but rather, it’s a quirky set of defining qualities that you’d swipe right for because they made you laugh. How couldn’t we love him?

Oh, and not to mention, Ezra Miller is attractive… so, there’s always that. Let’s face it… you would’ve swiped left on that football guy anyway, because the truth is, we don’t like people who are perfect! This is why the Flash was a standout character in JUSTICE LEAGUE.

But after taking it all in, I thought, “Wait, haven’t I seen something like this before?

X-Men’s version of Quicksilver in DAYS OF FUTURE PAST is pretty similar. He and Ezra Miller’s version of the Flash are both the ‘young, eccentric outsiders’ who can move so fast, that time around them all but stops when they can have their cinematic moments.

Evan Peters, who portrayed Quicksilver, has the unforgettably fun scene during Magneto’s jailbreak. The scene where he walks around and nonchalantly redirecting bullets and making the guards punch themselves: another crowd favorite. 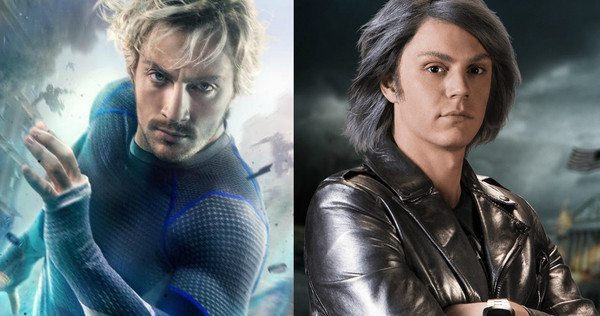 I realized, though, that the two characters are distinctively different. The audience connects with Quicksilver because he is the misunderstood delinquent who steals electronics for fun. On the other hand, the Flash is introduced in JUSTICE LEAGUE as working three part-time jobs.

Quicksilver sports goggles, a Pink Floyd t-shirt, and a leather jacket as his own brand of zany. But we know the Flash would never draw attention to himself if he could avoid it. I think on some level, the reason we bond closely with both characters is that everyone has this one unique quality or another which makes us feel different from everyone else.

What does this mean for DC going forward with Ezra Miller as the Flash? Aside from his solo movie release date in 2020?

The Flash & The Furious

Personally, I’m upset that the franchise didn’t predict Miller’s success and moved the solo film ahead of AQUAMAN, which will be released in 2018. Not to take anything away from Jason Momoa and his performance in JUSTICE LEAGUE, because he did an excellent job. However, the reason the Marvel Cinematic Universe continuously outcompetes the DC Extended Universe is solely due to their knack for anticipating success.

Tom Holland’s version of Spider-Man in HOMECOMING wasn’t all too different character-wise from the Flash. They’re both innocent, far-from-manly heroes. The fact that Marvel did so well with HOMECOMING’s release seems like a missed opportunity on DC’s part because the Flash could’ve made similar waves in the box office had Ezra Miller been cast sooner. Maybe DC should give smaller characters a chance at their own films before rushing into more Batman and Superman ones.

The Future of Ezra Miller’s Flash?

Not only did Miller outshine the other heroes in his performance, but the Flash’s subplot in JUSTICE LEAGUE felt, at least for me, the most satisfying. Sure, I enjoyed seeing Cyborg finally getting along with his dad. And of course, I was happy to see Superman come back to life and reconnect with his girlfriend and mom.

There’s just something about seeing the Flash hold that proof of employment paper up to the glass, though, that made me feel the deepest and most sympathetic towards him. Regardless of the fact that his dad was in jail, the Flash proved to his dad that he had a real job! It was the perfect ending to an excellent performance by Miller.

I have hope for DC’s Extended Universe going forward, as I believe that the Flash was a step in the right direction towards character development, which ultimately drives movies to success.