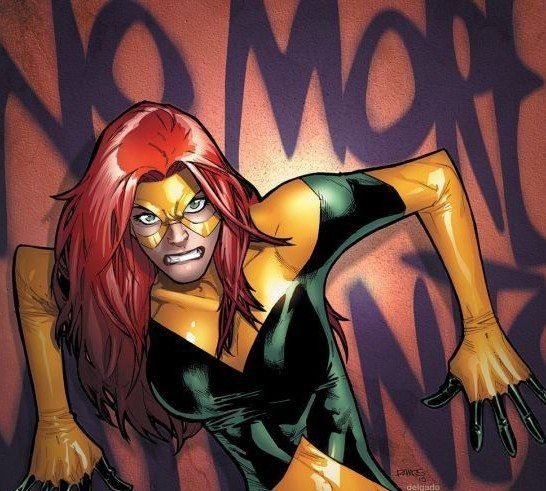 After fans were left with mixed feelings reading the debut issue of Lemire’s new X-Men flagship title, EXTRAORDINARY X-MEN #2 has come to answer a lot of those questions – and the answers won’t necessarily please you!

Mutantkind is still at the brink of extinction, and Storm’s attempt at recruiting a search and rescue team is still not going according to plan. While Jean is dealing with her love and college life, the recently reunited Rasputin siblings are searching for Nightcrawler in Amsterdam, and the goddess of weather and Iceman are faced with a friend they thought dead. In addition, Old Man Logan is not exactly motivated to help mutantkind at this point… And as the search for Nightcrawler continues, an old enemy of the X-Men reappears, and the walls around X-Haven begin to crumble, and where even is X-Haven?

READ: Need to catch up? Read our review of EXTRAORDINARY X-MEN #1!

I’ll have to admit it: it’s incredible how Lemire and Ramos managed to improve after such a, in my opinion, strong debut issue. The amount of tension that is being created is, in parts, breathtaking, especially at the end of the issue when Storm’s internal monologue is leading up to the return of a fan-favorite antagonist and an assault on X-haven. Due to Ramos’ spectacular art that is even better than in the previous issue. Reading this book, it almost seemed as if I could feel the ground shaking beneath my feet. Not only that but also has the dialogue improved extremely since it feels less forced to set up the plot and more natural. It is coming from heart. 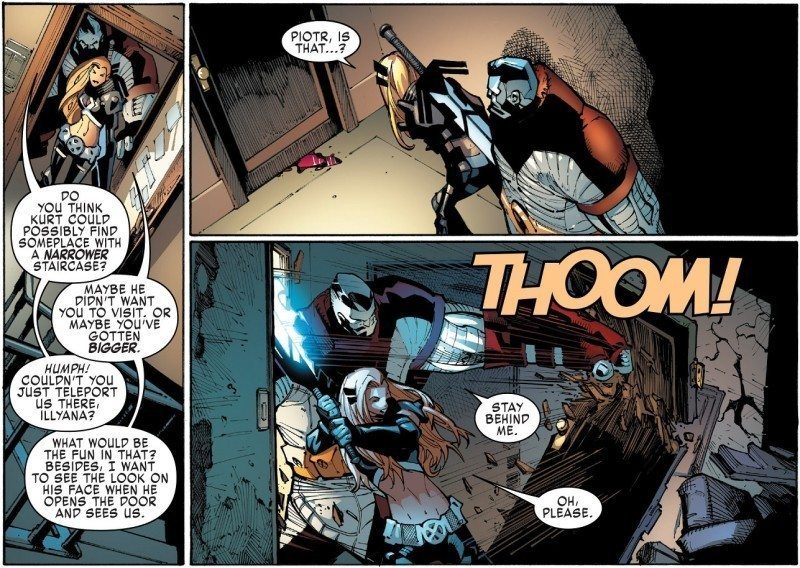 We still don’t know exactly where the book’s plot is going, and it’s probably too early to say. Some revelations about the 8-month-gap are kind of off-putting for the reader, since they contradict things people say in other Marvel books and what we already saw in previews, making them kind of irritating and not really helpful. Overall, revelations, such as the one about the exact location of X-Haven, are just straight up cool, amazing, and surprising to the reader. It literally left me speechless. One thing’s for sure, the creative team is doing a terrific job at showcasing how desperate the situation of mutantkind is. I, as a reader, caught myself thinking “well, they’re f****d for good now”, and if making us share the thrill with the mutants is what Lemire wanted to reach, he definitely succeeded.

When it comes to the character portrayal in EXTRAORDINARY X-MEN #2, a great job is being done with many characters: Storm’s internal monologue seems to be a reoccurring motif, which is a great choice, since it makes her extremely believable as a character by illustrating her desperation as a leader. 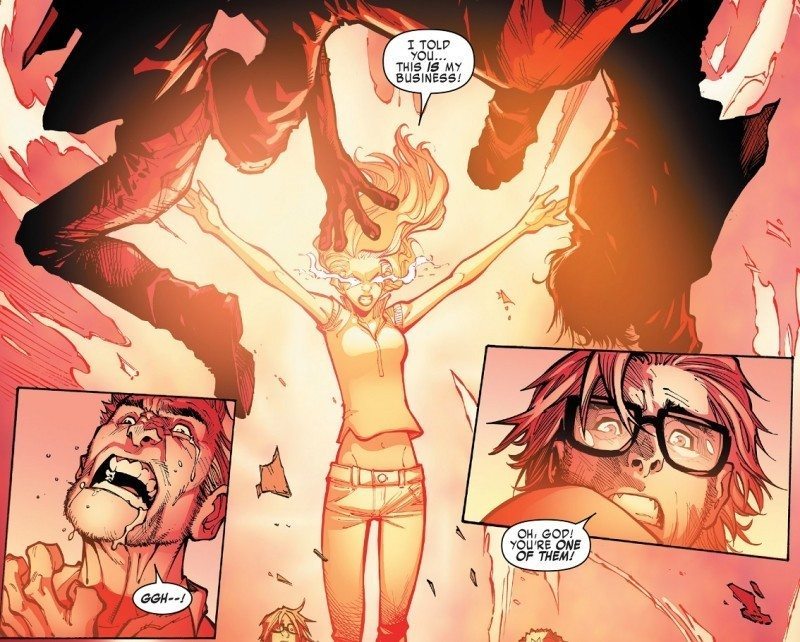 Confronting Jean with mutantkind’s struggles during “normal life” was a smart thing to do, even though certain revelations about her love life make past events seem extremely redundant from the reader’s perspective. The interactions between the Rasputins are heartwarming, and whenever Iceman actually gets to say something, he acts the way Iceman should. All of the X-Men are extremely in-character.

READ: Iceman is gay, but is that a surprise? Read our analysis to find out why the revelation isn’t all that shocking!

There’s only one member of the team I’m not too sure about: Lemire seems to be ignoring a lot of the character development that Old Man Logan has been going through, not only during the original Mark Millar story, but also during the recent Brian Micheal Bendis run. He’s trying to make him a broken man, a traumatized character denying his identity as Wolverine who doesn’t want to fight any longer, even though Logan was already way past this point. At the end of the Millar story, he started founding a team of superheroes and calling himself Wolverine once again, and at the end of the Brian Bendis SECRET WARS tie-in, he accepted the fact that he would be getting a second chance to make things right in this new universe. I’m not saying he shouldn’t be traumatized, but still, it feels like a step back, and a story that has already been told. It also doesn’t really fit to what other writers did with the character. At least the visual depiction of his trauma is top-notch, since the flashback scenes are being emphasized by the different colors.

LISTEN: Want more X-Men Analysis? Check out our podcast on the origin of the original ice queen, Emma Frost! 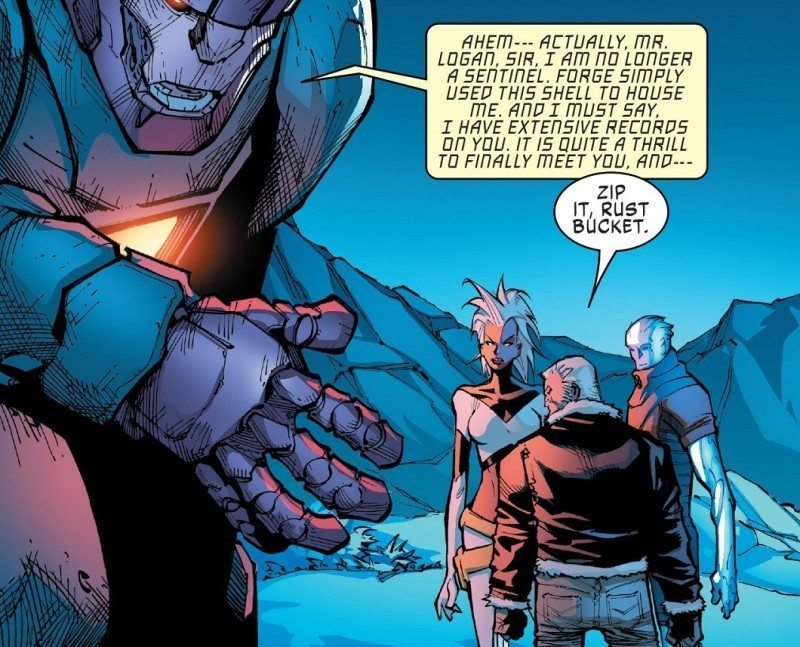 Yet, overall, it is  remarkable that Lemire clearly has a plan for all of these characters. He is arranging them in extremely interesting constellations and confronting them with what will surely make them develop as characters. Time-displaced Jean and Old Man Logan are pretty much made for interacting with each other, and that alone just makes me so curious to read the next issue. This issue is also a great example of how Lemire manages to capture the spirit of an X-book by giving it his very own personal touch. Small details like the implementation of a sensitive Cerebra-A.I. in a Sentinel body show how much love went into making this comic book, and how easy it will be to fall in love with the world Marvel’s rising star is creating.

At the end of the day, EXTRAORDINARY X-MEN #2 is arguably one of the best X-Men comics I’ve read in a long time. It contains so much of what readers love about the mutant franchise and has so many original ideas, from the character constellations, the little details, to the way the scenes are arranged, everything feels extremely in place. Superhero comic writers and artists should follow the example of Lemire and Ramos.