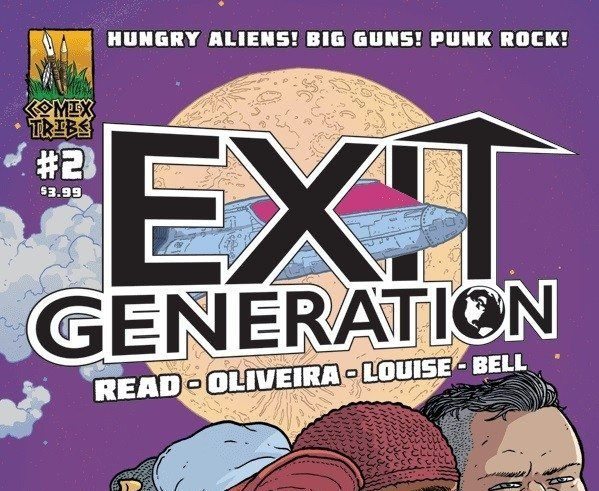 After an explosive start, EXIT GENERATION shows no signs of slowing down.

Our protagonist, Jack, is dead-set on chasing after the aliens that absconded with his adopted family, but how? Enter Scrap, a mountain of a man and a junker who may just have what Jack and his best friend, Mo, need to get off the planet–and get their family and friends back. Meanwhile, said family and friends find themselves captives of a race that sustains itself entirely by eating other races. Can Jack and Mo save them in time, or will they be the main course at dinner?

EXIT GENERATION #2 isn’t as close to perfect as its predecessor but 1) nothing was going to be and 2) everything it does works so well that it really doesn’t matter. It certainly tries to do as much and move as fast as last issue, and its mostly successful.

The only notable change artistically is that Marissa Louise takes over coloring duties from Ruth Redmond, but Louise doesn’t break stride, carrying the subtle, heartfelt, and wholly effective colors from the first issue into the second. Don’t be fooled, though–she knows how to deftly craft the shocking and intense moments, too… which may be a little more than can be said for the pencils. The pencil work is still very strong, and the overall style and character designs are consistent and unique, but there are some moments in tone that strike a discordant note. Moments of abject fear or overwhelming sadness can veer into the exaggerated with even thicker lines than usual, creating an over-the-top image that stands out from the rest. That can certainly work in theory, but the moments to which I’m referring happen when emotions are already high, so they push a little too far.

CATCH UP: READ OUR REVIEW OF EXIT GENERATION #1 HERE!

Tone is something of a problem with the entire book, but, again, it is far from being a deal breaker. Everything involving humans is played so straight and earnest that the Ruleian race and their culinary-focused dialect can seem a little jarring–they seem to be played for laughs, while everything else is life and death.  It’s such a consistent and genuinely amusing idea, however, that you can forgive it. This isn’t exactly a “parts are greater than the whole” situation but there’s just enough of a disconnect between elements to keep things from being perfectly harmonious.

EXIT GENERATION is so full of ideas, and so earnest overall, though that you can forgive foul-ups like that. For another example, because there’s so much happening, and it all moves so fast, some moments of characterization get short shrift or even seem a little canned. Where the origin of the Ruleians is excellent, economic, tight, and effective, the relationship between Scrap and his adopted daughter Hannah unfolds a bit clumsily.

Additionally, it’s a bit disappointing that Hannah’s rendered so sexually, but the fact that she’s not the only prominent woman in the issue; that it happens briefly; and the fact that Hannah gets shortened to “Han”, her flying partner Scrap, is big and hairy, and they, Jack, and Mo, fly into space in what could affectionately be described as a “hunk o’ junk” yet again buys EXIT GENERATION a pass.

GET IT?! IT’S A STAR WARS REFERENCE? Y’DON’T? FINE. READ OUR STAR WARS COVERAGE UNTIL YOU DO!

The creative team of EXIT GENERATION doesn’t expect to get by on its charm, though. You can see that they’re figuring things out as they go along, but are committed to simultaneously keeping the plot engaging and dramatic, the production distinct, specific, and well-executed, and everything moving along at a brisk pace. This is not a group that stalls until they get their stuff together. They know they have to impress right out the gate, and they’ve certainly done that. I’m confident they’ll find that harmony, and they seem it, too–besides, it’s not like they’re that far from doing so. Like Jack and Co.’s flight into space, it could be a bumpy ride, but it looks like this crew will get the job done.

Come back next time, because I’m definitely reviewing EXIT GENERATION #3.