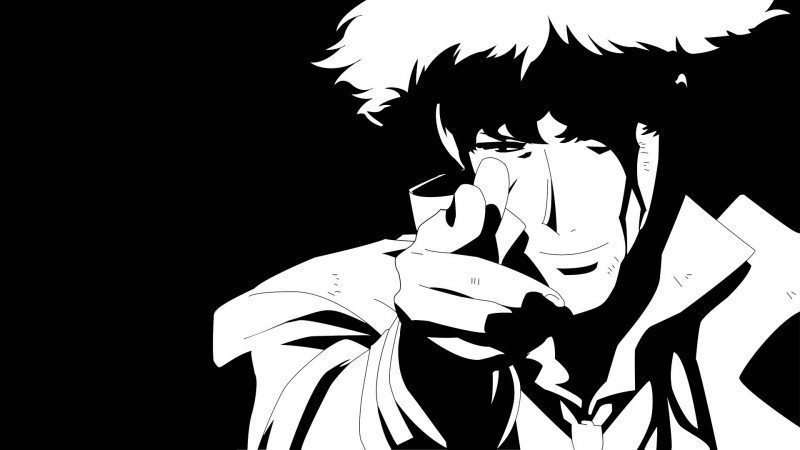 Often called the greatest anime of all time, COWBOY BEBOP is a flashy, action packed space waltz following the travels of bounty hunters Spike Spiegel, Jet Black, Faye Valentine, Ed, and Ein. Hidden under the flashy fight scenes and the spaceship chases are underlying themes of existentialism. Moments of existentialism come out in shedding the burdens of a past to embrace the moment. We’ll focus on Spike’s journey in his clashes defining his road on his journey through space.

Existentialism can be defined as an individual’s focus on their existence and acting with free will. If someone is perceived as a student, then them going to class would not be seen as going due to their own volition, but because they are a student. If an individual is a worker, then their vocation will be seen as being based on their need for money, not of their own decision. Existentialism focuses on breaking those assumptions, and on how individuals act with free will; it’s about breaking the expectations set up by an individual’s history and the rules of society and how people can act unchained. So for a student, it would be them skipping their class, and for a worker it would be them foregoing a higher paying job to do something they love. 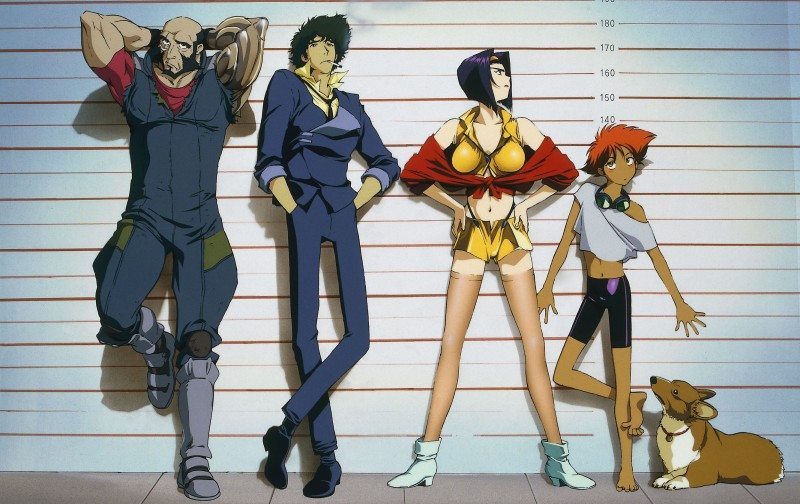 The concept of existentialism relates greatly to the concept of the cowboy via Amor Fati, or love of fate. Friedrich Nietzsche, considered one of the first existential philosophers alongside Søren Kierkegaard, considered Amor Fati as one of the key tenets of the Übermensch, the ideal superior man of the future. Speaking about Amor Fati, Nietzsche says in Ecce Homo, “My formula for greatness in a human being is amor fati: that one wants nothing to be different, not forward, not backward, not in all eternity. Not merely bear what is necessary, still less conceal it—all idealism is mendacity in the face of what is necessary—but love it.”

A cowboy, or bounty hunter in BEBOP’s case, is someone whose job isn’t very traditional because its conception is based on the government failing to protect its society, and asking society to give their so-called watchmen a hand. This leaves cowboys as outsiders, unburdened by society’s expectations. Additionally, cowboys live life day to day, bounty to bounty, so meditating on the past or worrying about the future would be a disadvantage and is not in the head of a cowboy. The themes of focusing on the day to day and embracing your fate are thoroughly explored in COWBOY BEBOP.

CLICK: Want to check another charming smooth-talker travel through space in comics? Then you’ll love LANDO #1

By embracing the allure of the cowboy life and living unchained, COWBOY BEBOP—in addition to Yoko Kanno’s sensational soundtrack that spans everything from jazz to folk—is a show that appeals to everyone, even those who would never consider watching an anime. What also speaks to COWBOY BEBOP’s broad appeal is that it is contained to 26 episodes and a film, providing a thrilling experience in a small and contained package, as opposed to many other animes which can go on for 100+ episodes. The central protagonist of the show is Spike Spiegal, a cigarette-smoking, carefree bounty hunter who takes days as they come and go. 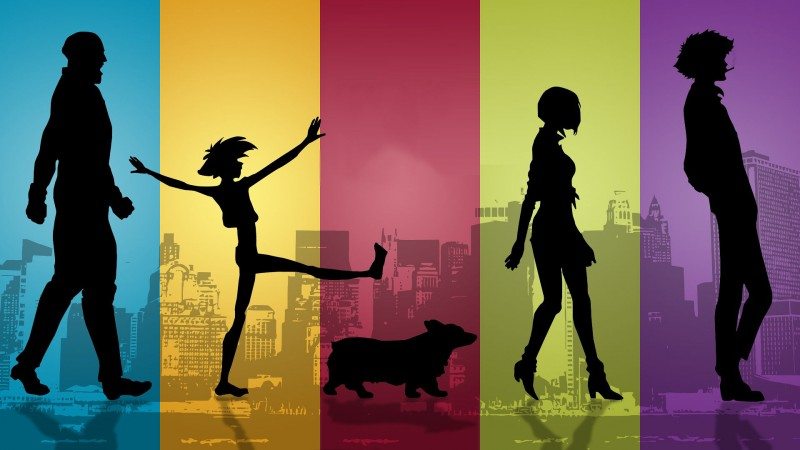 When introduced to Spike, we are introduced to a man who takes life step by step, open to every moment with a smile and a giggle. Throughout the series we have this idea cemented due to Spike’s carefree attitude, and lax demeanor. Even in tense situations, Spike makes the scene humorous and calming. Spike has such a devil-may-care attitude, he’s not afraid to jump from spaceship to spaceship, as seen in the session “Heavy Metal Queen,” which stands as an example of Spike’s understanding of the full capacity of his free will. While anyone else would believe if the ship goes, they go, Spike recognizes that that is not necessarily true.

Spike seems to be a composed of nothing but positives, but through dark grey flashbacks, scenes of his past are revealed to us. With one light eye and one dark eye, it seems as if Spike has one side of his identity scarred by the past and one side in the moment. Speaking about his eyes, Spike states to Faye in the final session, “Look at my eyes, Faye. One of them is a fake because I lost it in an accident. Since then, I’ve been seeing the past in one eye and the present in the other. So, I thought I could only see patches of reality, never the whole picture. I felt like I was watching a dream I could never wake up from. Before I knew it, the dream was over.”

Half in reality and half in a state of sleep is how Spike approaches life and provides the reason for his carefree, unchained attitude. Because of the death of his past life, Spike has lost the identity he culminated up until the viewer met him. Additionally, his betrayal by his lover leads him to stop investing in life, leaving him floating in the ether, like a dream. This abandonment leaves Spike an aimless, empty man. The tenets of existentialism come up in this development of Spike because being robbed of your history robs you of your identity. The history of an individual is important because it is the background and structure of your life. Everything you know, what you love, and how you act is based on how you developed, and to leave that all behind as Spike has done is jarring, but sets him up to have a view of life akin to an existentialist. Having his history robbed leaves Spike as a man living in the ether, not on the side of society as a businessman, not as the dirge of society as a thief, but in the middle, unable to be categorized. Approaching life in a state of half sleep and half awake, treating every moment with a smile, like a dream, leaves him unchained. 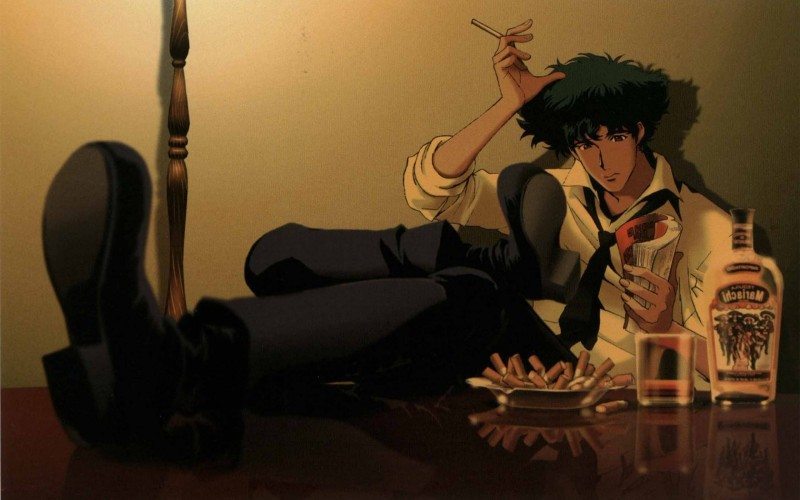 The acceptance of the tragedy he was a victim of, in addition to his carefree attitude, leaves Spikes as the perfect example of embracing Amor Fati, “love of fate.” Even when burning in the cargo hold of the Columbia shuttle, spiraling towards earth and burning through the atmosphere, Spike lights a cigarette and sighs, “Whatever happens, happens.” Likewise, in The Gay Science, Nietzsche says “Amor fati: let that be my love henceforth! I do not want to wage war against what is ugly. I do not want to accuse; I do not even want to accuse those who accuse. Looking away shall be my only negation.” Spike looks away from the tragedy he was victim to, not seeking revenge or letting it dwell in his head, thereby exhibiting Amor Fati. It is as key tenet of Amor Fati to embrace what life gives, not to deny it or try to change it. Spike does so by not trying to reunite with his lost lover or letting it haunt him, but embracing it to control it, and he ends up using it to become a bounty hunter and create a new family with a sense of camaraderie between himself and the outsiders on the Bebop.

CLICK: Check out or picks for best Seinen Manga of All Time!

Another existential master who Spike shares characteristics with is Bruce Lee, who also exemplifies Amor Fati. Lee once said, “Never waste energy on worries or negative thoughts, all problems are brought into existence—drop them.” Just as Nietzsche praises looking away from the issues one faces, not to meditate or focus on them, so does Bruce Lee. The similarities between the mindset of Spike and Bruce Lee are very intentional. Spike’s fighting style is heavily based on the fighting style of Bruce Lee. In Session 08 “Waltz for Venus,” a character asks Spike to teach him to fight. Just as Bruce Lee’s memorable quote states—“You must be shapeless, formless, like water. When you pour water in a cup, it becomes the cup. When you pour water in a bottle, it becomes the bottle. When you pour water in a teapot, it becomes the teapot. Water can drip and it can crash. Become like water my friend.”—Spike imparts the same teaching to the young man: “You have to be fluid like water…You’re tense, I’m calm. You apply excessive force, I control that force through fluid motion. That means relaxing the whole body so it can react instantly without resistance—no, without thought. Do you see now? It means becoming like clear water.” 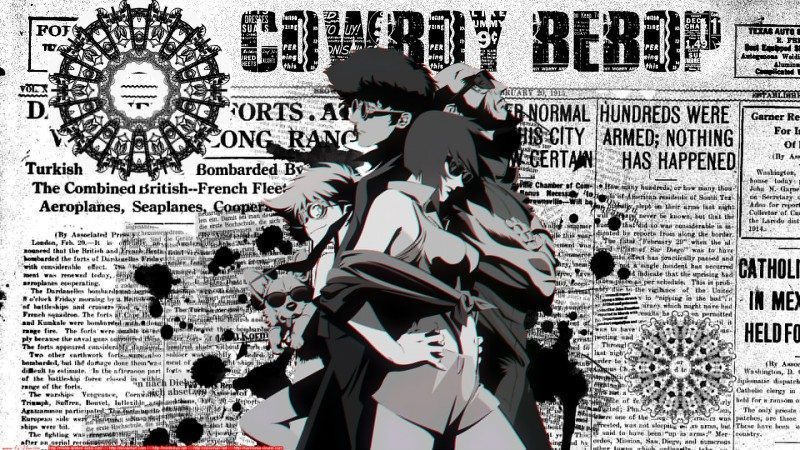 Both Spike and Bruce Lee, in addition to exemplifying Amor Fati, follow the tenets of being like water. Just as Amor Fati encourages living in the here and now, embracing things as they come, so does water, taking the form of anything and controlling excessive force by being inherently fluid. By being like water, the individual is able to take anything that comes their way, embrace it, and expel in whatever manner they want, just as Amor Fati preaches that the individual does not fight fate, but embraces it to control it. In addition to combat, Spike does this by controlling the excessive impact the betrayal of his past had on him and turning it into a new life as a cowboy, unburdened and rewarded with complete free will. Just like water can take any form, as a cowboy Spike can live life anyway he wants.

CLICK: Shonen Manga captured the hearts of an entire generation. Check out our picks the Top 5!

The role of the cowboy is fitting because, existentially speaking, cowboys understand Nietzsche’s philosophy that “all idealism is mendacity in the face of what is necessary.” Good & evil, right & wrong, chaos & order—cowboys understand all those lines are drawn in the sand. Additionally, cowboys are afforded more free will then say a C.E.O. An executive’s life is contingent on making sure shareholders gain profit, while a cowboy can deny and accept bounties by their own prerogative. Rather than let the betrayal of his past weigh him down and plague his mind, Spike embraces Amor Fati, and uses his past, like water, to embrace that force and control it. Spike uses the force of his past to afford himself the freedom to live life in the day to day and just be, which we see get played out throughout COWBOY BEBOP, a show about being. “Mish Mash Blues” ends with the line, “This is not the end. You’ll see the real Cowboy Bebop someday!” Even in it’s last moments, COWBOY BEBOP ends with a plea to the viewer to embrace their fate, live life in the moment and to live like a cowboy.