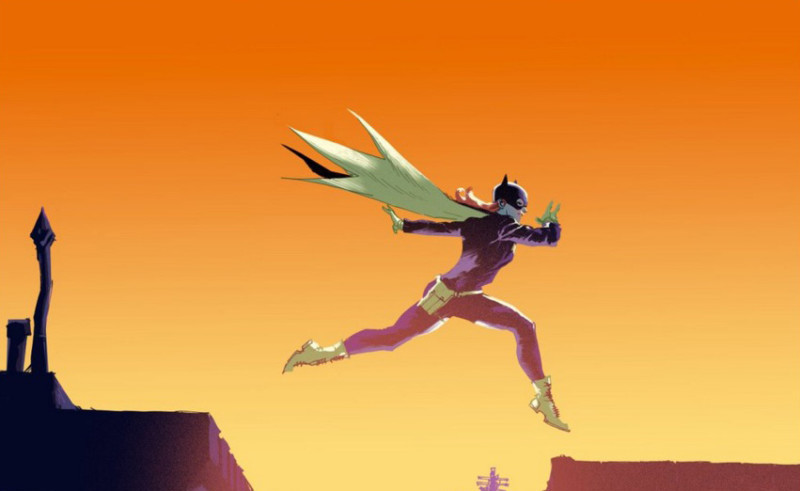 BATGIRL is one of the most consistently engaging comics on the stands right now. As both a crimefighter and college student, Barbara Gordon faces the kinds of struggles that most comic book readers can relate to. Not so much the hunting down lunatics part. Yet struggling to get your homework in on time? Finding room in your day to hang with you best friend? Realizing the person you’re dating is really a total sleazebag? Very relatable.

It’s this classic balance of dual identities that makes BATGIRL work so well. The most recent arc, which ended with last month’s release of BATGIRL #11, is titled “Son of Penguin.” The arc features all the elements mentioned above. Except instead of being a regular sleazebag, Ethan Cobblepot is a billionaire sleazebag who’s also a costumed supervillain named Black Sun. Poor Barbara just can’t catch a break.

BATGIRL writer Hope Larson took some time out of her busy schedule to chat with ComicsVerse about the arc, the things that make Barbara Gordon tick, and what Batman might do if the Penguin’s son asked him on a date. Yup, we really asked her that.

ComicsVerse: Why Batgirl? What drew you to Batgirl in the first place? Why do you enjoy writing for her; and what other comic book characters might you like to write for if given the chance?

Hope Larson: Why Batgirl? I was invited to pitch on the book, and I’d already read the previous run and loved it. She’s fun to write, and she can be both serious and lighthearted, depending on the story — like a real person can. She’s been through a lot, but she’s not tortured. As far as other characters I’d love to write, I hope I get to revisit Poison Ivy at some point. She’s one of my favorites.

READ: Want a taste of the current story arc? Here’s our review of BATGIRL #9!

CV: I love the look and feel of Burnside, as well as Barbara’s relationship with the city. Her story and her friendships feel so woven into the fabric of the city itself, like it’s all part of one beating heart. It feels especially distinctive after Barbara’s journey to Shanghai. Is there anything you can tell us with regards to the creation of this relationship between hero and city? The effect Barbara has on the city and vice versa? What about how Burnside reflects who Barbara is as a person and a hero?

HL: Luckily for me; Cameron Stewart, Brenden Fletcher, and Babs Tarr did an incredible job of setting up Burnside and Batgirl’s relationship to it, so I had that going in. It’s basically Brooklyn. I’ve never lived there, but I have spent time in other gentrifying neighborhoods. I’ve always been fascinated, horrified by, and also complicit in that process. Batgirl and Barbara have, in their separate lives, a lot of impact on Burnside; Batgirl is its protector, and Barbara is both the founder of a clean energy corporation and involved in the community through her work as a student in the library sciences. The relationship between people and their communities is something I’ve explored a lot in my other work, and I’ll continue to do so because it is endlessly fascinating.

CV: Spinning out of the last question, there seems to be a fascinating element at play with Barbara, where she can be in radically different locations (Shanghai, Burnside, an airplane) and each one seems to bring a different element out of her character. Barbara seems very adaptable to her environment, and it feels like you have a lot of fun as a writer transplanting her every so often. Can you tell me how you come up with these different adventures and locations for Barbara to travel to, and what each of these excursions brings out of the character for you?

HL: Travel and moving have as much to do about exploring who you are as they do about exploring the world. What would my life be like if I lived in Philadelphia or France or Hong Kong instead of Los Angeles or Ohio or Burnside? Who would I be if I lived somewhere else? Batgirl is comfortable in her own skin and confident in all kinds of surroundings, so she’s a fun, adventurous travel buddy.

It was actually DC’s idea to send Babs on a trip, but I picked the locations. I sent her to Asia mostly because I would like to spend more time there and the research seemed fun, and I have friends who’ve lived in Singapore and China. The actual route she took was partly dictated by logistics: how long it would realistically take her to get from point A to B to C, and how that would impact the plot. I really wanted to send her to Nepal because I interviewed a friend who spent time there and it sounds incredible, but that didn’t make sense in terms of the plot and timeline.

READ: We also interviewed Julie and Shawna Benson, writers of BATGIRL AND THE BIRDS OF PREY. Take a look at it here!

In retrospect, it was a fun arc to write, but the amount of research required for a book that moves to a new location in each issue is massive. I probably wouldn’t attempt that again, but I’m glad I went for it.

HL: Here’s hoping! We’re working on an arc now that might involve a bit of travel. But then again, it might not, because we haven’t written it yet and nothing’s set in stone until you go to press.

CV: What are some of your influences for writing BATGIRL? Throughout the “Son of Penguin” arc, I got a very strong BUFFY THE VAMPIRE SLAYER vibe. Something to do with the common struggles of balancing super heroics with everyday life. That, and Barbara’s hilarious and pun-filled thought bubbles and verbal quips. Was BUFFY THE VAMPIRE SLAYER an influence to you? If not, what else shaped your take on BATGIRL?

HL: I do love BUFFY and would count it as an influence, sure. I came to it in my late 20s, when I could really appreciate the craft and storytelling and theme elements of it, so it probably made more of an impact on me than it would have if I’d watched it when it was on TV.

It’s a fun challenge to come up with snappy quips; they help camouflage scene transitions, for one thing, which is useful in a plotty book like this. I’m not really a funny person or a humor writer, but I do try to push myself in that way, and this book is the perfect place.

CV: How did you come up with the idea of creating a son for the Penguin and Ethan’s arc for the story in general? Did you always intend for him to wind up a villain? Was giving the Penguin a son for your book something you had to fight for with the DC higher ups?

HL: My editors and I came up with him over lunch, and it was too good not to use! He was always going to end up a villain, for sure. The idea of the Penguin having a super hot estranged son who we’ve never heard of before, who has major daddy issues, was tantalizing to all of us. It’s a classic plot.

CV: Weird but hopefully interesting final question: If everything about your “Son of Penguin” story was the same, but it was suddenly starring Batman instead of Batgirl, how would your story change? How would he react to the social media stuff, to meeting the son of Penguin, and of course, to being asked out on a date by him? Would he go on the date for the sake of sleuthing?

HL: [Laughter], wow. Batman seems pretty straight to me, but what do I know? If Ethan was a suave, slightly older guy and he asked Batman out, I’m sure Batman would be flattered and cool about it. He would probably see the social media stuff as frivolous. I don’t feel like I know Batman well enough to know for sure how he would react, but it’s fun to think about!

Our thanks to Hope Larson! BATGIRL #11 is on sale now!

Some of Hope Larson’s Writing Appears in the Following Comic Books!