ETHER #1, the first of a new series from Matt Kindt and David Rubín, already looks like it will be a colorful, engaging, and definitely interesting story. The art is super bright and playful, and the characters look almost like they could be out of a Dr. Seuss book–a slightly dark and creepy Dr. Seuss book, anyway.

The story is that of a mysterious man, Boone Diaz, who researches the world of Ether in an attempt to understand it and disprove the existence of magic. In this first issue, he is asked by the mayor to help solve the murder of the Blaze, who protects the Ether from the “bad stuff” possibly getting in. The story and art for this comic meld together fantastically so far. It excites me to see where this series will go with the next few issues.

The issue starts off with a sort of intro, as do most first issues. It seems a little awkward at the beginning, but soon it settles a little more into the story and any awkwardness is replaced by what can only be described as some wacky stuff going on. However, while the story starts off light and colorful, it soon takes a dark turn. The first strange thing that appears is a terrifying little bird that sings what appears to be a death song. A character wants Boone to hear it sing, but it is unknown what the character’s motives are. Boone has apparently encountered the bird before and makes excuses to hurry away.

READ: Want more sci-fi from Matt Kindt? Here’s a review of 4001 A.D. #1, another great series from the writer of ETHER!

The next dark turn comes when Boone finds out that the gatekeeper for the Ether has been murdered. This scene isn’t entirely dark in itself, due to the outlandish character of the mayor. However, when Boone and his companion go to investigate their suspect, things definitely take a creepy turn. They suspect a strange, dark librarian, who might dabble in dark magic. Regardless, the guy seems pretty evil. The way his character is designed just screams “evil magic-using intellectual,” and Boone seems to think so as well. 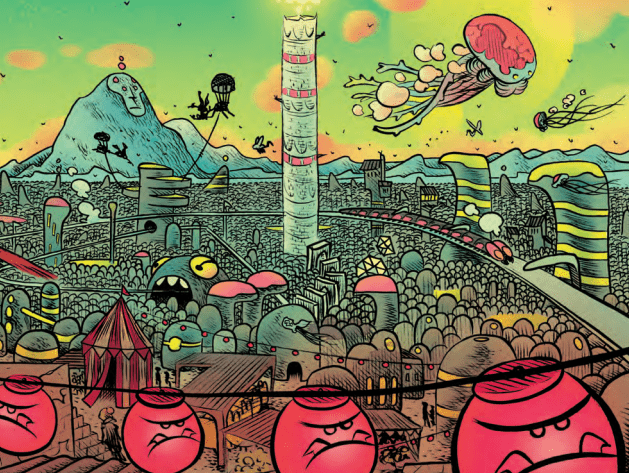 So, to get into the art, which is, in my opinion, one of the best aspects of ETHER #1. It is so, so colorful, and really gives the story a strange, outlandish feeling. This is fairly fitting, considering that it takes place in another dimension. The art also does a great job of transitioning between settings. Every change of the comic’s setting results in a changing color scheme. The opening scene, at the gateway of the Ether, features an orange, blue, and lavender color scheme. Then, with a jarring red panel, the color scheme switches to mainly greens, pinks, and yellows once Boone enters the capital city of Ether. The colors continue to change in this pattern throughout the issue, and they definitely add a wonderful layer to the comic.

The character art is just as interesting as the colors being used. Boone’s companion is a lavender ape named Glum who wears a giant gold amulet around his neck. There is a shopkeeper who is a slightly strange pink and teal bird-looking figure with what could be either scales, feathers, or both. Then, there’s the shopkeeper’s bird–which, although very cartoonish–could be the most unsettling creature in this whole issue. It looks like a small canary, but with enormous teeth and very tiny eyes. I honestly thought this was going to be a pretty light-hearted comic until I saw that thing. It is a truly strange scene that Boone elaborates on after he and Glum have left the shopkeeper and his bird behind.

Plenty more interestingly designed characters exist to talk about, but you’ll have to read the comic for those; I could spend ages talking about the art in this comic. Instead, on to the characters themselves. While the art does a great amount of characterization, the writing absolutely does more than its fair share. Boone describes himself as a researcher and scientist, and it definitely shows. He is staunchly anti-magic, and not in the sense that he doesn’t like magic; Boone Diaz is a true skeptic and believes that there is no such thing.

READ: Interested in comics about other dimensions? Check out this review of the indie comic, THOSE SHADOW PEOPLE!

In ETHER #1, the entire reason that Boone is in the Ether is to study it. Furthermore, he is there to prove to its inhabitants that what they take for magic is really just a phenomenon that can be explained entirely by science. This is the driving force behind his character. His scientific mind is exactly why the mayor requires him to solve the mystery of the Blaze’s murder. Kindt gives many characters unique personalities, which in a first issue is very impressive.

To conclude, this first issue of ETHER is fantastic to say the very least. The plot and characterization are both surprisingly engaging for a first issue, and the art could have an entire review written on it alone. Matt Kindt and David Rubín have created something amazing with this series, and I really hope that the rest of the issues will live up to this first one.