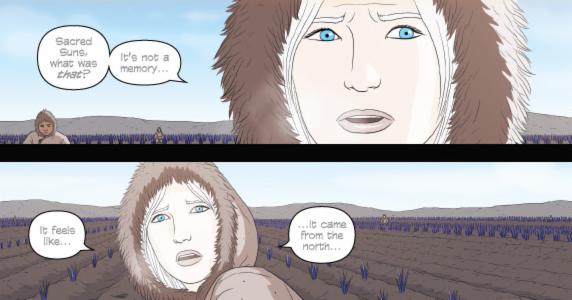 From the creators of Image’s hit series ALEX + ADA comes a story in a land we’ve never seen before. Jonathan Luna and Sarah Vaughn bring us to a place full of corruption and strife. Three distant suns brighten the sky. Slaves toil for no compensation as the threat of imperialism looms over the last free region on the continent. Here is where the story of ETERNAL EMPIRE begins. ComicsVerse got the lovely opportunity to interview Jonathan and Sara. Here, we ask them some of our burning questions about their newest work of art.

ComicsVerse: ALEX + ADA’s setting was a future that we could easily imagine. However, ETERNAL EMPIRE takes place in a vastly unfamiliar land. Was it more challenging to envision a probable future for us or to create a place completely unknown and new?

Jonathan Luna: We’re still worldbuilding as we go, but we’ve done a ton of it so far, and ETERNAL EMPIRE’s world is looking like the most-difficult one of the two. In ALEX + ADA, I pretty much just illustrated our world and added futuristic elements. In EE, Sarah and I have to talk about every facet of this world. It’s a lot of research, creating, and hard work, but fun and rewarding. 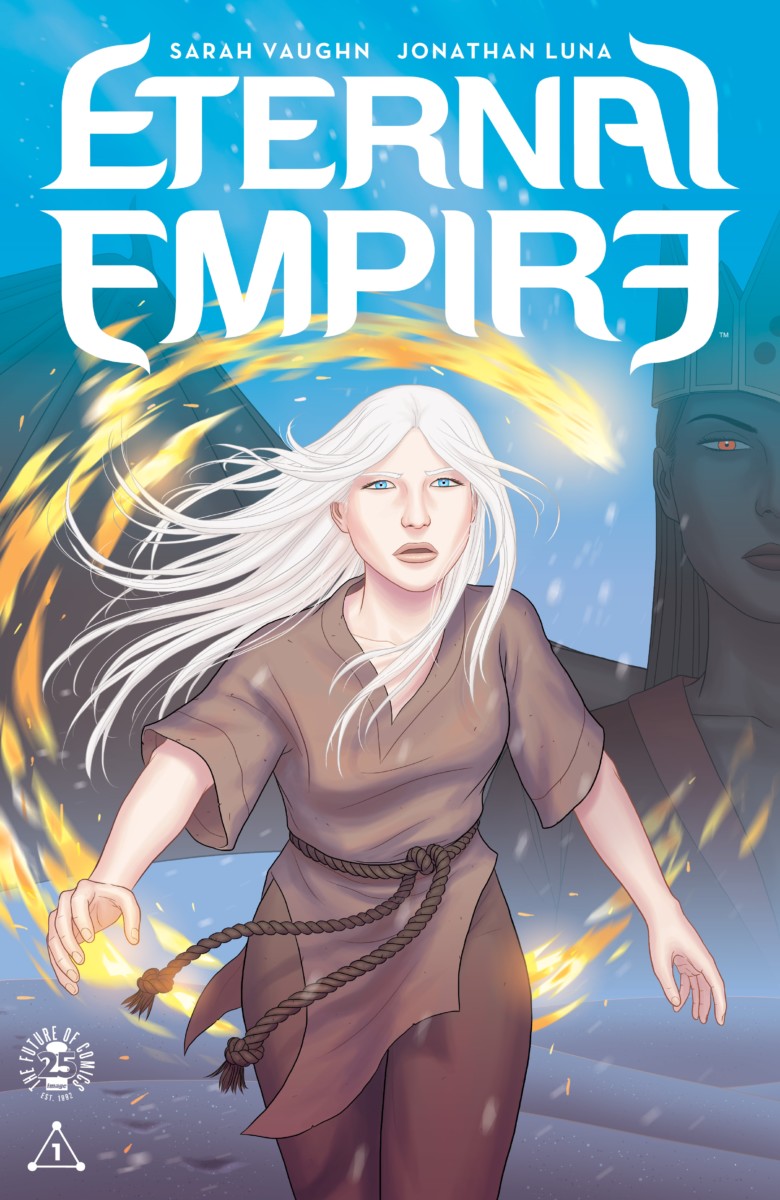 CV: What does your creative process look like in terms of chronology? Do you complete the art first, the writing, or do they happen at the same time?

Sarah Vaughn: Jon and I spend a lot of time in development, plotting and worldbuilding first, though we’re always in discussion about the book as we move forward. We need to know what’s going to happen in the story before we can even begin on the actual pages. The scripts come after development. The best way to describe co-writing in the scripting stage is that I write the most, and Jon gives tons of feedback and writing in the editing stage. Once we’re solid on an issue, he’ll use panel descriptions to begin layouts and inks. Things might change if something isn’t working, or if we come up with something new, but we both like to have a strong framework in place before we move ahead.

JL: Once Sarah approves the layouts, I tighten up the pencils more and then ink them. Then I color and letter.

READ: Want to see what we thought of the comic? Read our review here!

CV: What is it about comics that made you choose this medium to get your stories told?

JL: I grew up reading comics, starting with MAD, Cracked, TMNT, and X-Men, onto Image Comics, then mature comics like Vertigo and Marvel MAX, and indie comics. When I was 12, I vowed to become a comic-book artist, always drawing. For the most part, I drew my own creations. I knew Image was the place for me, ever since it was born. As for the medium, I love that a comics story can be told with one creator or a small team. And the style of the art can be quite unique to the artist.

SV: There’s something about comics and the way the medium mixes art and written word that really appeals to me. There are certain things you can emote and create in comics that you just can’t in movies or books, just as there are unique experiences for those ways to tell stories. There are other ideas I have that are meant for mediums other than comics, but there are certain ideas that are meant to be comics and comics only.

CV: It seems like there are already political themes emerging in ETERNAL EMPIRE, specifically dealing with colonization and war. Do you pull from a specific time period in history or even current day politics for inspiration?

SV: We actually didn’t pull from any one specific place. We looked at a lot of empires over the history of Earth, different systems, and leaders who would be considered tyrants. There’s certainly a lot to be learned from our own history and present issues, and I have a lot of opinions and feelings about these topics. But Jon and I immersed ourselves in this world, and so many of the conflicts and thoughts we have about it have everything to do with the context of the story, instead of wanting to make a statement about our own reality. Though of course that will always bleed through a creative work.

JL: Yeah, people might wonder if ETERNAL EMPIRE is our response to what’s going on in the world today, but it’s more about history as a whole.

CV: Many readers loved the romantic relationship of ALEX + ADA. Can we expect to see some more romance in ETERNAL EMPIRE?

SV: Romance is a subject that is very near and dear to me. I will always love love. Without giving too much away, relationships, love, and bonds between people will always be something I want to explore in stories. Eternal Empire is no exception. But love and relationships come in many forms, as do their progressions.