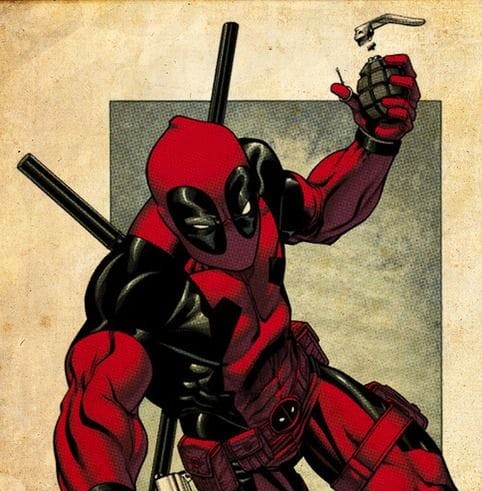 Do you love the Deadpool movie and want to get into the comics, but you don’t know where to start? Have no fear, ComicsVerse is here! Comics are often a daunting medium to break into because of all the different arcs, timelines, and relationships they show. We’ve hand-picked this list to give you some of the Deadpool trades we think are good places for a new reader to start. Obviously we all have our own favorite writers and artists, but this is for you–the Deadpool novice. Warm up some chimichangas and get ready to dive into the wonderful world of Deadpool! 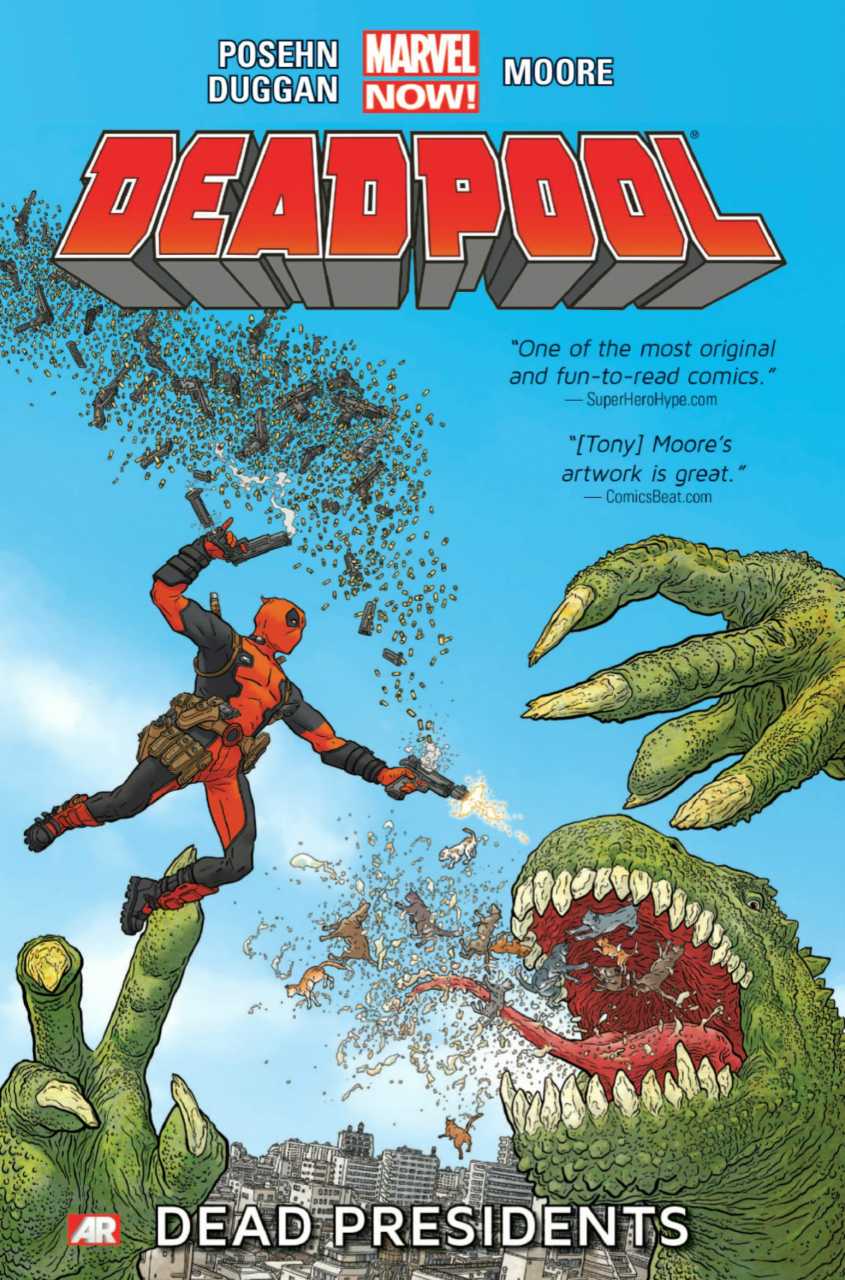 Presidents have been brought back to life by a well-meaning necromancer, who wants them to lead the country to its former glory. This backfires immediately as George Washington declares the best way to do this is destroy it and start over. Deadpool is the only superhero with bad enough publicity to get away with killing resurrected presidents. After all, people respect Captain America and Spider-Man too much to see them killing undead presidents, but S.H.I.E.L.D. thinks Deadpool is a perfect fit for this disgraceful task. Why? Because no one respects Deadpool as it is! This collection has a lot to offer new readers. The humor is up to the second, Tony Moore draws a mean zombie, and you get to see Deadpool box Abraham Lincoln. What more could you want?

READ: Check out our review of the new Deadpool Movie! 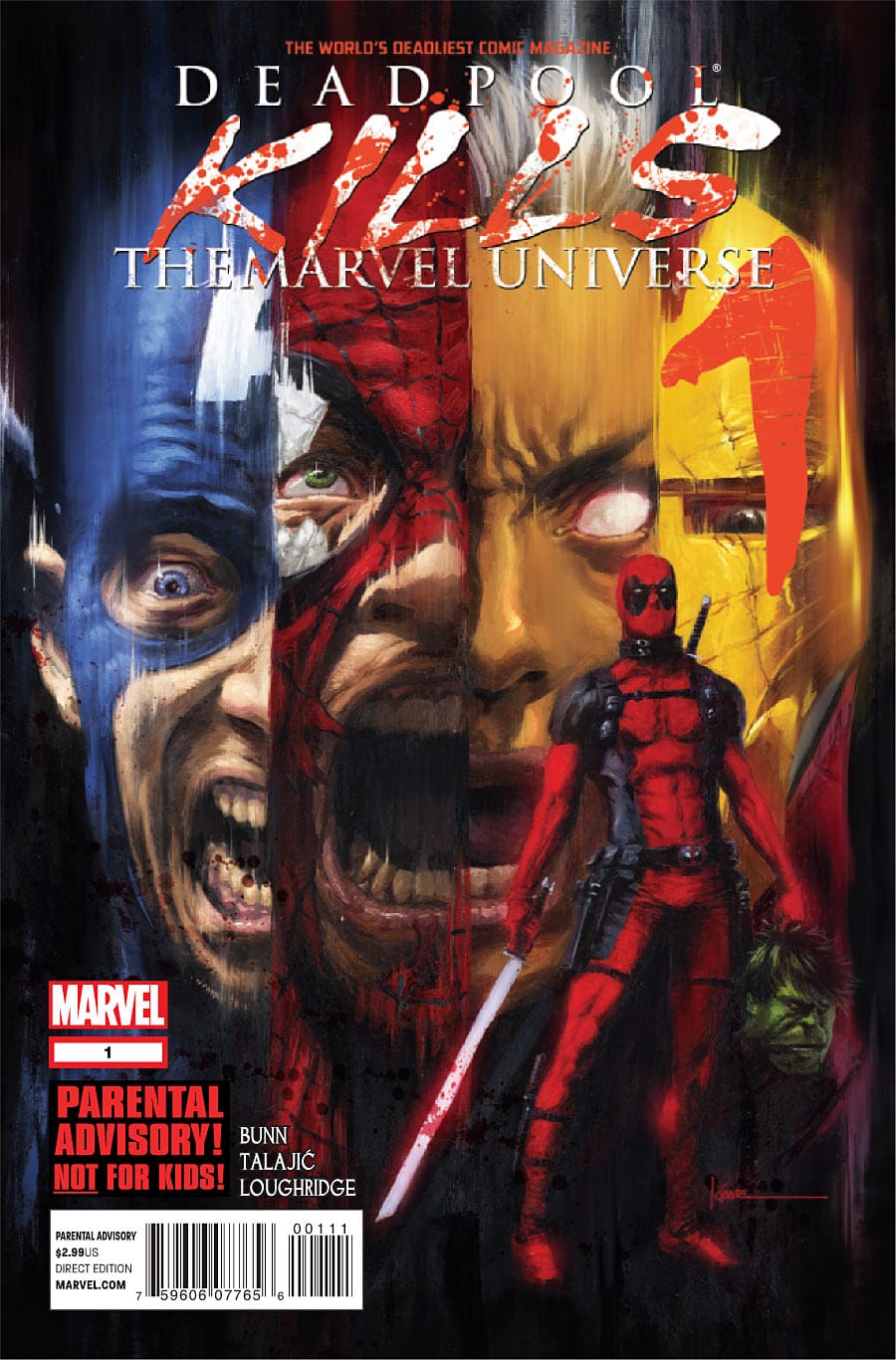 This is one of the most intense Deadpool stories out there. In it, he realizes that he is a fictitious character and must “liberate” (AKA brutally murder) everyone else in the Marvel universe. It’s insane. This one is pretty much nonstop action and showcases Deadpool’s classic fourth-wall breaking in a darker context. It also shows how dangerous Deadpool is–he’s capable of taking on and beating anyone toe-to-toe if he wants to thanks to his skills as a mercenary, healing factor, and personal arsenal. But what shines through here is Deadpool’s knowledge of his fictitiousness and intense dedication to his goal. It’s a chilling read, and a good reminder of what Deadpool is truly capable of.

READ: Deadpool finally gets some company! Check out our review of DEADPOOL AND THE MERCS FOR MONEY #1! 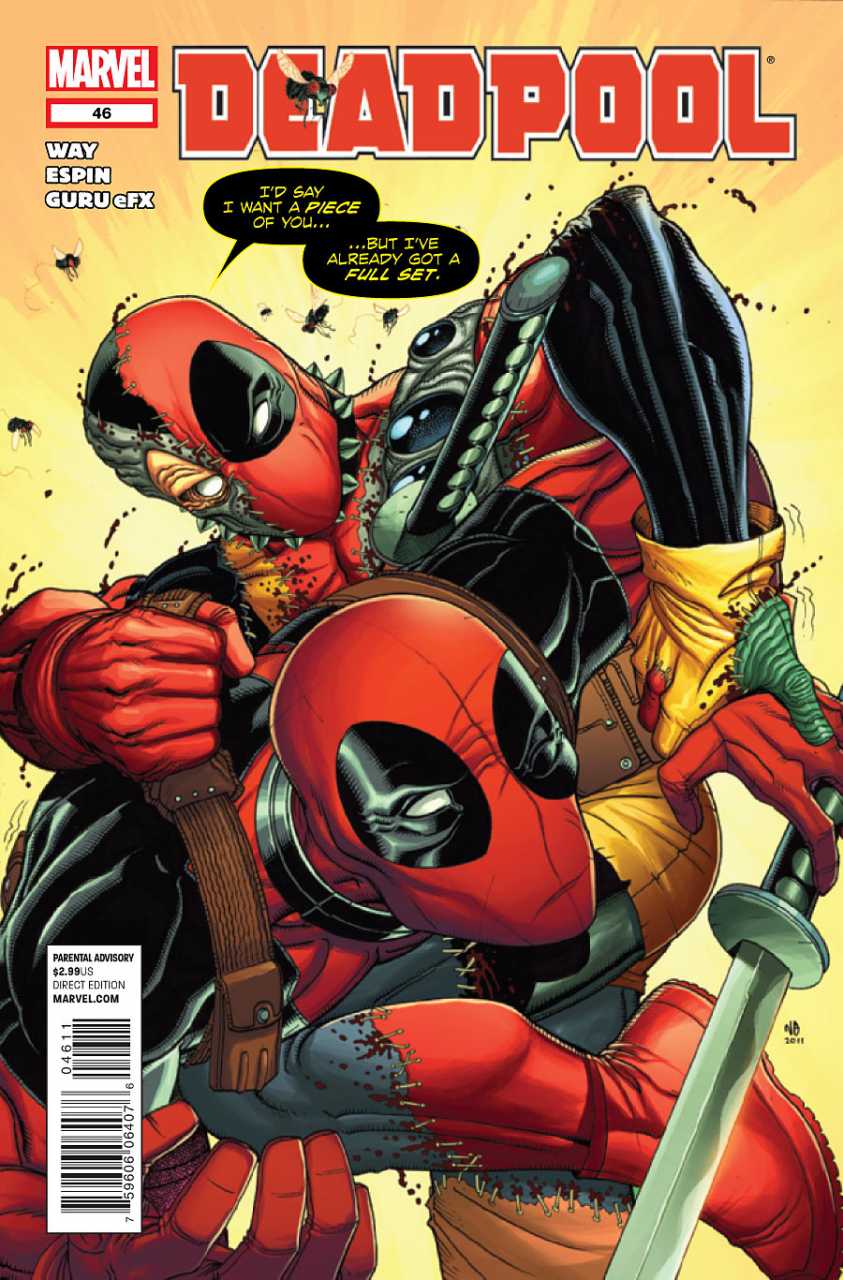 Deadpool faces off against his worst enemy–himself! Sort of. Evil Deadpool was created when one of Deadpool’s therapists fell in love with him and kept pieces of him that were severed off during battles in a refrigerator. Eventually, she had enough to sew together a whole new ‘Pool. What I like about this one is that Deadpool’s internal struggles are made external, and you get to see him literally beat himself up. Plus it shows a lot about Deadpool’s thought process and what others think of him in order to stay one step ahead of this bizarre new foe. The humor in this one is definitely darker, but it’s still a fantastic collection and definitely one of my favorites by Way and friends. 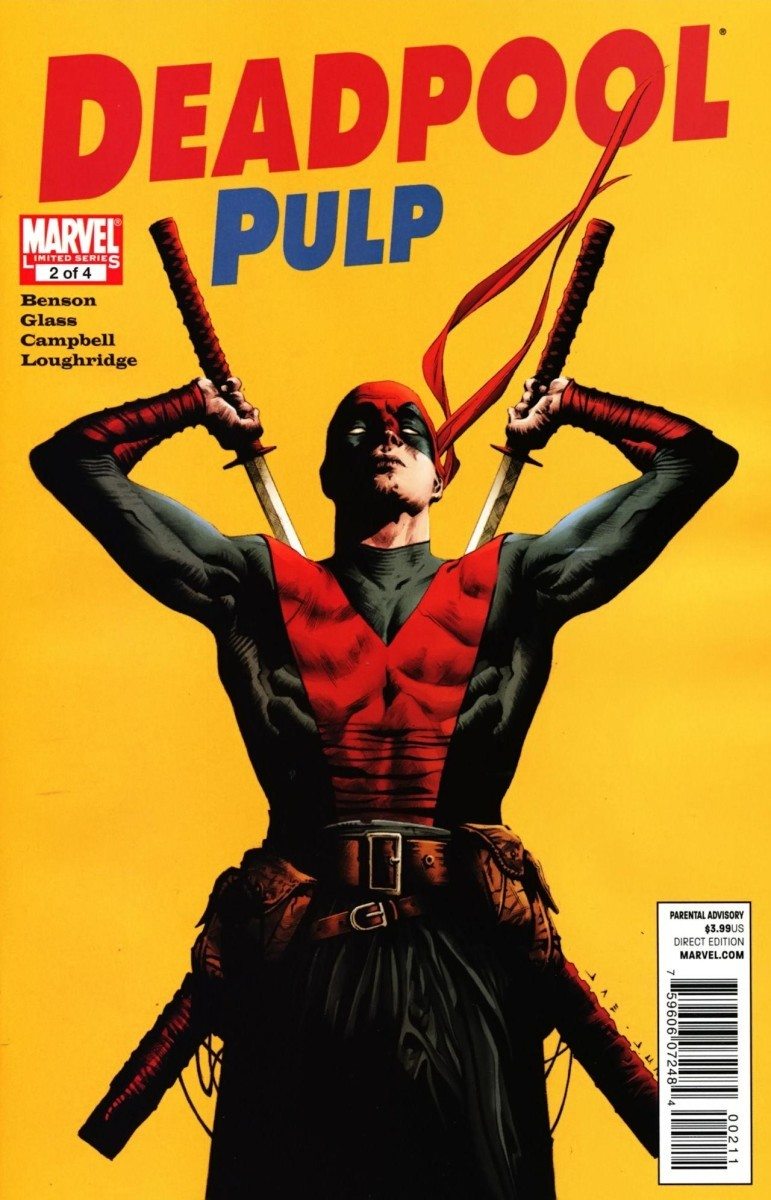 DEADPOOL PULP features Wade Wilson, AKA Deadpool, as an insane CIA agent on a mission to prevent a nuclear disaster during the Cold War. Though a much bigger departure from how we usually see the character, DEADPOOL PULP still has all the weird offbeat humor that we expect from Deadpool. The Merc with the Mouth is always at his best when he’s carpooling with the heroes and villains of the Marvel Universe, but PULP shows his alternate universe solo stories can be just as fun, violent, and irreverent. This 4-issue run feels like a Frank Miller comic on acid, coming complete with ninjas and a femme fatale. 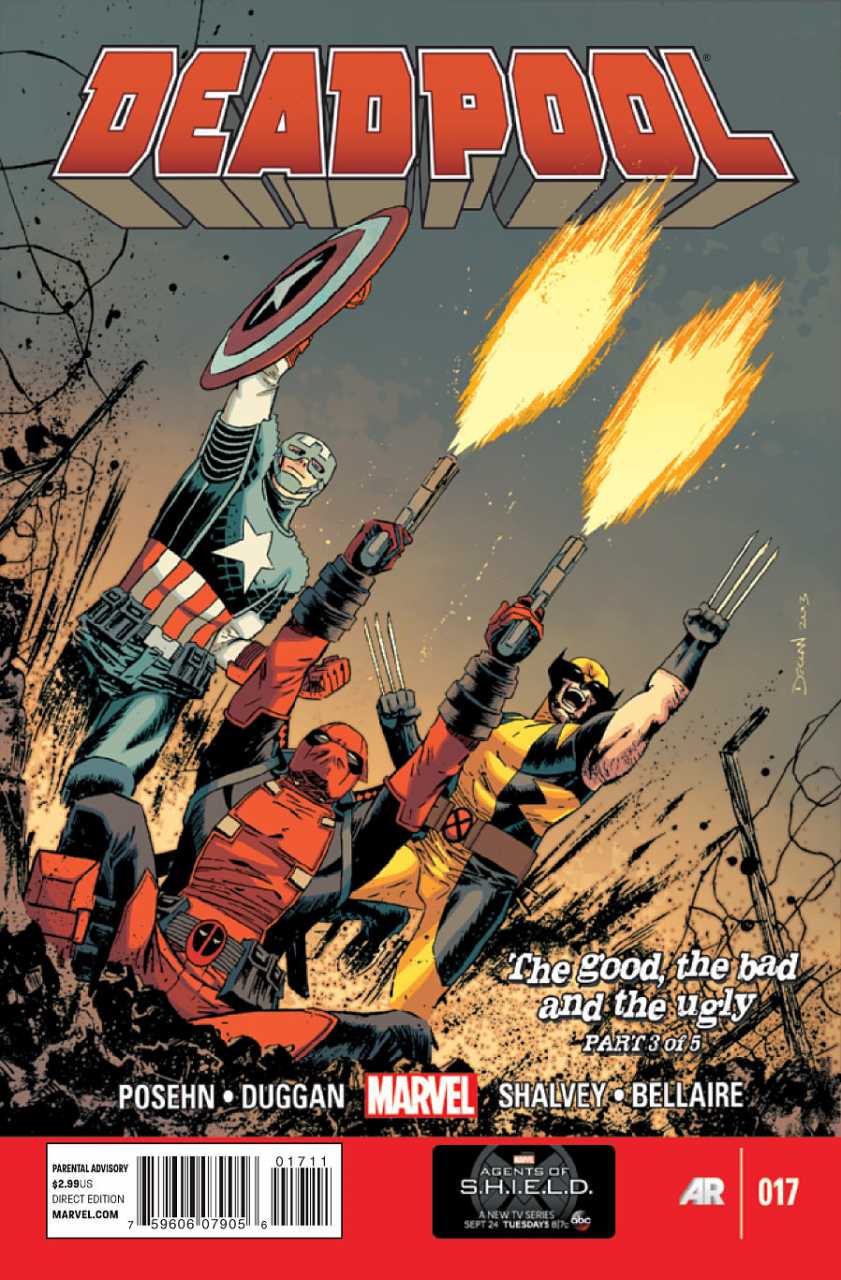 The Good, the Bad and the Ugly by Brian Posehn, Gerry Duggan, and Declan Shalvey

This arc is a part of the Marvel NOW! Posehn and Guggan run. THE GOOD, THE BAD AND THE UGLY’s story arc follows Deadpool and pals Wolverine and Captain America to North Korea where they uncover some dark secrets about Deadpool’s past. This arc keeps the hilarious tone but juxtaposes it with a dark, disturbed sensibility that one can expect from a twisted character like Deadpool. We get to see Deadpool hang out with two of Marvel’s heaviest hitters, who also happen to have virtually the same origin story as Wilson. The dynamic between Deadpool, Wolverine and Cap is what makes this story run great despite its darkness. Reading along as Deadpool gets to the bottom of this weird and disturbing conspiracy is uncomfortable and refreshing, mostly due to the inclusion of Wolverine’s rough devil-may-care attitude and Cap’s boy scout sensibilities.

READ: DEADPOOL turns 25! Check out our review of this explosive issue! 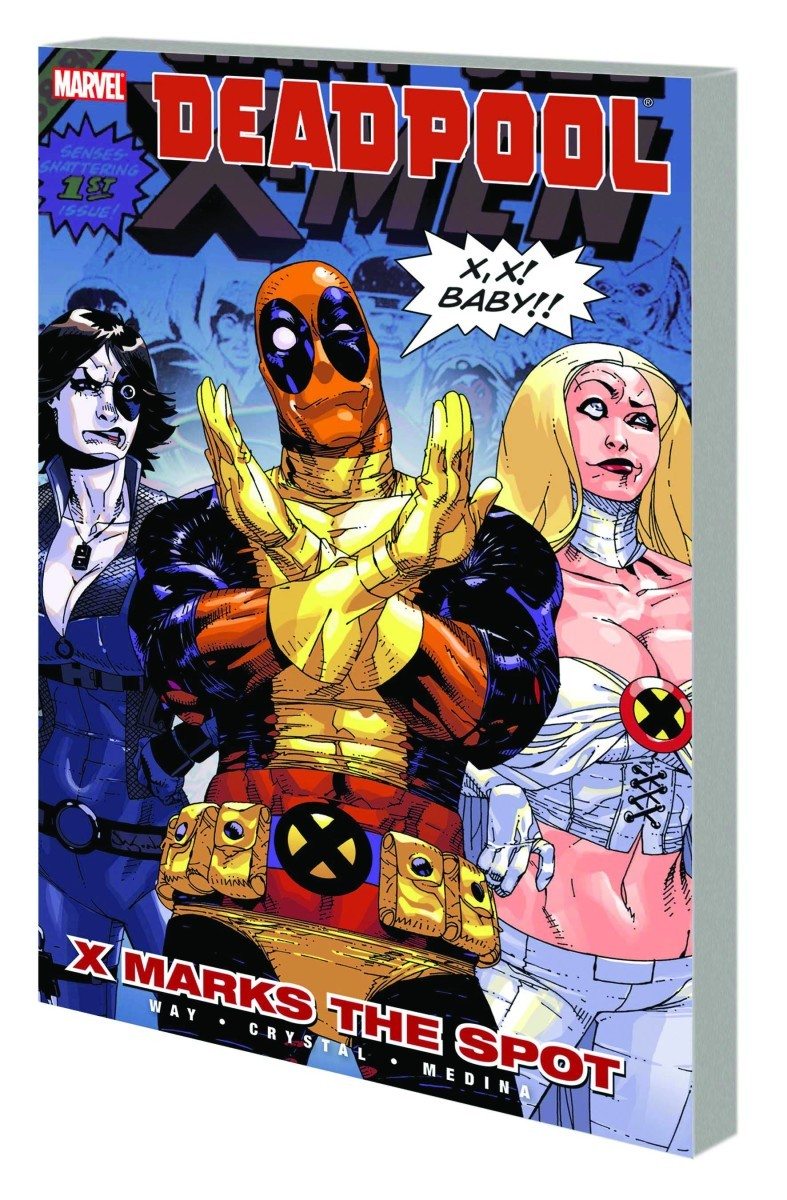 X Marks the Spot by Daniel Way and Shawn Crystal

For those who know Deadpool, you know he’s at his funniest and most entertaining when trading lines with other Marvel characters, especially the X-Men. Though Deadpool stands on his own as a character, his being a pseudo-mutant associates him more with the X-Men than any other Marvel characters. With the exception of his debut in X-FORCE in 1992 (and the 2011 prequel run), X MARKS THE SPOT is probably the best X-Men/Deadpool crossover. The story follows our mercenary after hitting rock bottom, both financially and existentially. After an extensive conversation with himself he decides he wants to be a part of a team, more specifically the X-Men. The hijinks ensue when Deadpool tries his best to impress the yellow and blue squad with his trademark violence and his off the wall psychosis.

Obviously there’s way more Deadpool out there to read, but you should have a pretty handy starting list by now. What are you waiting for? Go forth with your new reading list, ComicsVersers!