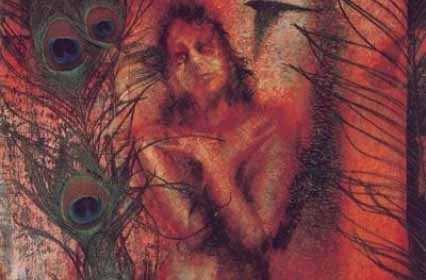 I recall watching Neil Gaiman’s commencement speech on YouTube during one of my Creative Writing classes in college. It was, to put it simply, just amazingly. I would even go as far as to say life changing, if I may. What a man, right? Already being a big fan of Coraline, I knew I was in for a treat, though was truly unprepared for the brilliance that was about to ensue. It was like ordering your favorite dessert at a restaurant, but this time, they amped up the amount of chocolate in the center to make it all the more sweet.

Neil Gaiman’s works–whether it be a novel, a comic book, or even a screenplay–seem to consistently concentrate on common themes of entrapment and selfishness, and SANDMAN DREAM COUNTRY #17 is no exception. Much like his young adult novel, CORALINE, the first story in this Edition, “Calliope,” focuses on a young woman who is also the title character. Unlike CORALINE, “Calliope” handles much darker struggles for the lead character and focuses on a much more adult audience.

The story of “Calliope” focuses on writer Richard Madoc and his captive, Calliope, his mythical muse, whom he forces to live and have sex with him in his basement. Once Madoc starts having success writing, he is unwilling to give Calliope up.

Calliope, fed up with her horrendous lifestyle, seeks help from her fellow muses for salvation. She is led to Morpheus, who is the most helpful and even does as much as to confront Madoc on his terrible actions, demanding she be released. When Madoc tries to explain his pathetic justification for holding her hostage to Morpheus (he claims he “needs her” so he can have more ideas for his writing, and that she’s the reason for his recent success), he does not sympathize, but punishes him. Thus leading to Madoc’s continuous downward spiral as he begins to carve his overbearing ideas on the walls, until he goes completely blank with loss of any concept at all. All this whilst Morpheus simultaneously helps Calliope escape.

As mentioned earlier, I can’t help but notice continuous themes and concepts brought to life in multiple of his works. One of those themes that Gaiman concentrates on is the concept of entrapment, and keeping people in an unfortunate situation in a location they don’t want to be. In CORALINE, Coraline’s “other mother” wants her to stay with their new family forever. In “Calliope,” Calliope is held against her will by filmmaker Richard Madoc. The story of her struggle is told parallel to Madoc’s success with his new film, …AND THE MADNESS OF CROWDS. Doing so generates a complex understanding, yet blunt portrayal, of things not being as they seem (another theme that CORALINE handles).

Another theme both stories possess is that of selfishness, and self need. Both villains in each piece (the “Other Mother” and Richard Madoc) attempt to justify their cruel actions by claiming a “need” for the other person to stay against their will. Again, while these cases are told using different tools, they still perpetuate the same concept. Another interesting addition that I happened to notice is that in both CORALINE and SANDMAN DREAM COUNTRY #17 is that both male characters happen to also be writers, and both female characters happen to be the captives. There certainly must be a feminist theory and commentary resting between the lines in these texts, but we’ll save that analysis for another time.