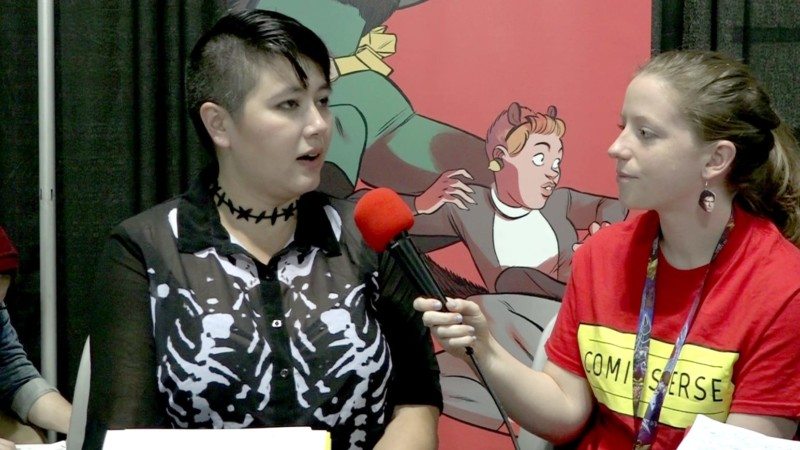 New York Comic Con 2016 was action-packed! At the Con there were many talented writers and creators, and we were fortunate enough to talk to one such talented artist, Erica Henderson.

Erica Henderson is the artist for the beloved SQUIRREL GIRL series. For those who may not know, Squirrel Girl, aka Doreen Green, is a Marvel superhero who possesses enhanced strength, a furry tail, and the ability to communicate with squirrels. Her stories are lighthearted and fun, which is probably an inevitable result of mixing squirrels with superheroes.

While it doesn’t affect her enthusiasm for the character, Henderson admitted that squirrels can be jerks since she was once bitten by one herself. Besides her feelings about the furry critters, Henderson revealed how she feels about seeing Squirrel Girl cosplayers and her opinion on the typical depictions of both male and female bodies in comics.

In the interview, Henderson discusses how she first became involved with the comic and what it’s like working with Squirrel Girl’s writer, Ryan North. She described her artistic process, explaining how she uses both computers and ink to achieve her style.

WATCH: Want to see more videos from NYCC 2016? Check out our interview with Scott Snyder and John Romita Jr.!

Henderson also talked about her personal history and how she took the leap from working on video games to comic books. While not always a popular topic, we discussed failure, serving as a reminder that the path to success isn’t always without some bumps. Additionally, Henderson revealed the answer to the question that everyone’s been dying to know: “what species of animal she would communicate with if she could?” Finally, we took a quick look into Squirrel Girl’s future and what new villains she may face!

With such a fun character like Squirrel Girl, we can’t wait to see where both the character and Erica Henderson will go from here!