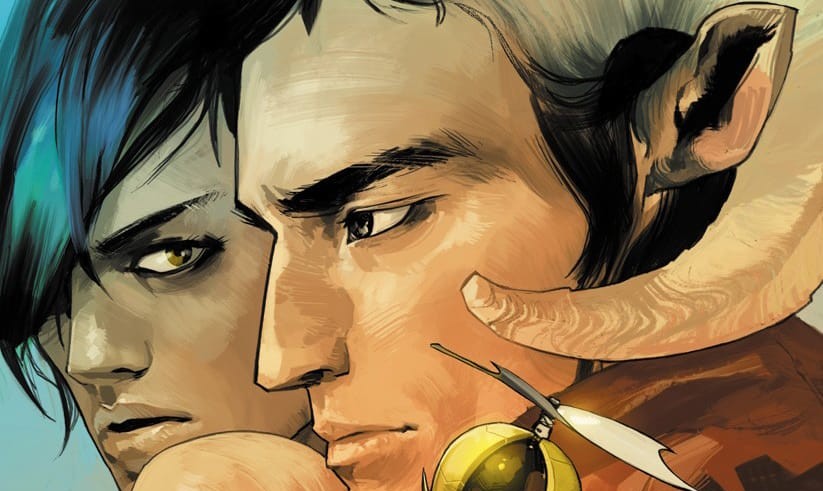 SAGA has been described as STAR WARS meets GAME OF THRONES, which is a pretty amazing comparison considering those are two of the biggest franchises of the last 50 years–Thank goodness they didn’t put LORD OF THE RINGS in there too. However, I have to say that the story of Alana and Marko’s struggle to protect their forbidden child and love as they run across the galaxy is more than up to the challenge.

READ: Want to know more about SAGA? Check out our analysis of diversity in the most recent arc!

Told from the future in voiceover by Alana and Marko’s child Hazel, SAGA is the story of Alana and Marko’s struggle to protect their daughter from a world that wants to rip them apart. Why do they want to rip them apart? Because Alana is from a Landfall, a planet where the people have wings, and Marko is from Wreath, a moon of Landfall where the people have horns. These two people have been at war since anyone can remember. So long that the rest of the universe has even gotten involved and taken sides.

There are more creatures than I can name in this short post, but SAGA is more than just fantastical and beautiful creatures rendered gorgeously by Fiona Staples. SAGA is an epic story about the ways that cultures and prejudices clash. It is a story about the lengths that people will go to to protect their families. It is a story about pregnancy and the unexpected and pointless nature of death. SAGA is a story about life itself and what it truly means to live. In this podcast with guests Pete Imbesi, Matthew Murphy, Brad Sloan, and Phil Casey we discuss all this and more. So sit back and relax while ComicsVerse discusses Brian K. Vaughan’s and Fiona Staples’ epic space opera, SAGA.

For your convenience, this podcast is also available on iTunes!