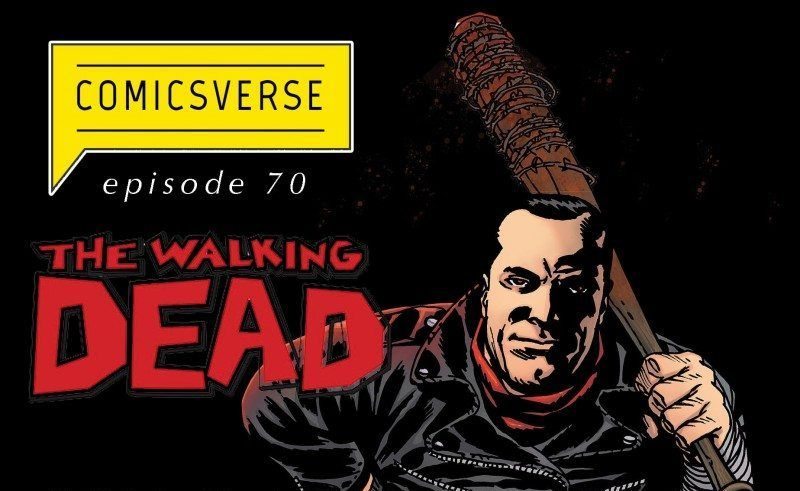 The brilliant podcast team of Justin Alba, Dennis Mui, Pete Imbesi, Emily Coleman, and Corey Spanner assembled to discuss and analyze the last fifty issues of THE WALKING DEAD. Fans of the comic will know instantly what happened, and the earth-shattering events that took place over those issues. Fans of the show will be happy to know the issues discussed were all about Negan, the latest villain on THE WALKING DEAD television show played by Jeffrey Dean Morgan.

As issue #100 dropped, the trajectory of the book changed. Negan, nefarious and enigmatic, brutally murders one of the key characters of the book. From then on, an all-out war erupts between Rick Grime’s group of survivors and “The Saviors,” led by the baseball-bat wielding Negan.

LISTEN: Want to hear about another comic book turned movie? Our podcast on the X-Men spinoff, NEW MUTANTS, goes from issues #1 – #100 of the original run!

Ideas of morality and leadership are debated as the team compares Negan and Rick and ask themselves if they are even really that different.

In the aftermath of war, our heroes jump ahead in time three years, something the book has never done. Did it work? Did the creative team use such a huge storytelling tool to their advantage or did it fall back? The team discusses this along with other ideas of storytelling, as a book that has been going on for this long surely has a reason to keep going.

Finally, a new threat arrives and attacks Rick Grimes and our other favorites. A sadistic and radical group of rogues attack and kills many characters, and the podcast crew decides whether this is too much or too little in the wake of a villain as good as Negan.

Listeners be warned, the crew delved deep into the emotional and structural points of the book to analyze why such a simple story of survival like THE WALKING DEAD has turned into one of the longest-running and financially successful comics on the shelves today!

Make sure to give it a listen and, as always, let us know how you feel in the comments below!

For your convenience, you can also listen to the ComicsVerse Podcast on iTunes, Spreaker, and SoundCloud!

Learn more about the ComicsVerse staff that appeared in this podcast episode!