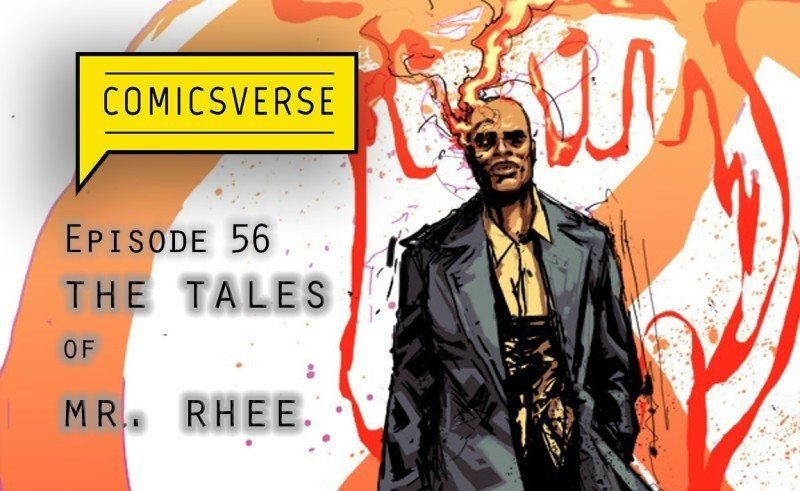 Have you read Tales of Mr. Rhee? No? Well, you should. As part of our Comics You Probably Never Heard Of podcast series, the ComicsVerse team sat down to talk about this popular indie series, but widely unknown to most outside of the independent comic scene.

Written by indie comic superstar and Cthulhu’s Homeboy Dirk Manning, the author of Write or Wrong, Nightmare World and of course, Tales of Mr. Rhee (hint hint, read the title out loud).

HEAR: Love a good creator owned comic book as much as we do? I’m sure you do! Warren Ellis and Declan Shalvey created INJECTION, listen to our interview with co-creator and artist, Declan Shalvey!

Tales of Mr. Rhee is a horror or pulp noir comic series, originally published as a spin-off of Manning’s Nightmare World series and follows Mr. Rhee, as he traverses a post-apocalyptic world after the rapture.  Currently, there are three volumes to the series, with the third only recently released. Volume one follows Mr. Rhee in multiple standalone stories while volume two is a thread of one story, over several comics and is a prequel to volume one. Unfortunately, we had a bit of confusion regarding this during the podcast, so not everyone was aware of the continuity of the series and this did hinder some in their understanding of the story structure. Getting past that, everyone seemed to enjoy the series and many of the ComicsVerse team, now look forward to future volumes as they release.

We had several series we covered on our Comics You Probably Never Heard Of podcast series, all of which went extremely well and as usually, the ComicsVerse team was very opinioned about all of the books. We hope that you check out the rest of the comics that we covered on the other podcasts, as well as checking out the entire catalog of ComicsVerse podcasts and articles on the site. Everyone really enjoyed Mr. Rhee and thank you, Dirk, for the interview at New York Comic Con 2015, which you can also find on ComicsVerse.