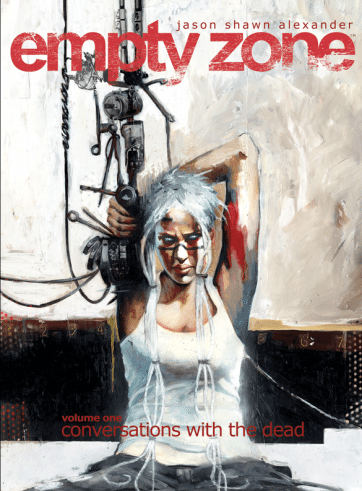 Introductions to a new creator and comic can oft prove to be redundant and taxing, especially with such great projects getting produced so regularly. Let me start by saying that I got the great chance to meet Jason Shawn Alexander at NYCC 2015, and I’m currently kicking myself as a fellow creative because not only is he an extremely humble creator but also EMPTY ZONE is everything I’ve ever wanted from a comic as a reader. So much so that he created the very comic I wished to make on my own some day. Needless to say, as bitter as that makes me, I am so pleased to see that Jason Shawn Alexander realized a personal dream narrative of mine, and he kicks some serious ass doing it. In the words of the all-too-famous Brian K. Vaughan, “Jason Shawn Alexander has always been one of the most original artists in comics, but with EMPTY ZONE, he shows he’s one of our most unique writers, too. What a gorgeous book.” Who isn’t a sucker for writer-artists? Jeff Lemire fans, anyone?

LISTEN: For more discussion about strong female protagonists, check out our podcast on DC’S BATGIRL OF BURNSIDE!

After reading the first two issues that Jason Shawn Alexander graciously tried to give me free of charge, I knew that I wanted to cover the release of EMPTY ZONE’s first TP, on shelves for you today. Very few can successfully write and visually portray a character as complex and interesting as the story’s protagonist, Corinne White. For years, I’ve scoured the shelves for a story that not only had a female protagonist that’s characterization didn’t come off as “trying too hard,” but also developed her into a three-dimensional character that any reader could relate to. Although there are several books that could probably be named to fit this criteria, something about Corinne White’s story in EMPTY ZONE reached me as a reader. Corinne White follows after many badass anti-heroes before her in that she has a troubled past, a drinking problem, and a strong sense of justice. What sticks in my mind the most about her, however, is her look. In a world of TANK GIRL wannabes and HACK/SLASH rip offs, Corinne White’s overall look alone could have made the story stick in my mind, with her choppy, long white hair, face tattoo, and bionic arm. She reminds me a lot of Ellen Ripley’s androgynous beauty and strength in the ALIEN film series in that she stands willingly on her own without the active questioning or patronizing of others. Corinne White is a gorgeous and powerful soldier, and everyone else knows it and respects it. 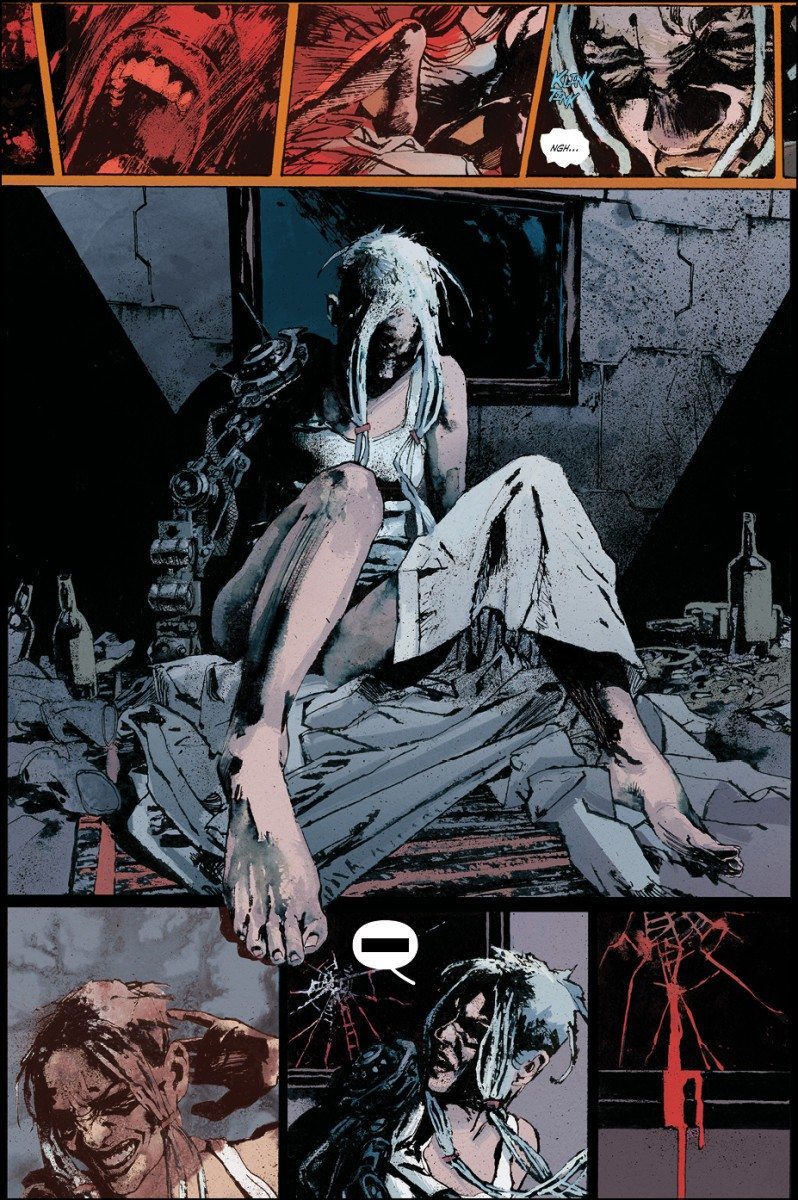 Another element of EMPTY ZONE I adore is the seamless marriage of sci-fi and the supernatural. This may not be the first permutation of such a genre-blend, but it’s always nice to see creators explore and further blur the lines between set story classifications. Jason Shawn Alexander does a good job of placing the reader into the post-world black out dystopia in which technology and advancement leads us to another run with the Dark Ages. But the way he makes it his own world is by allowing the existence of souls and ghosts. 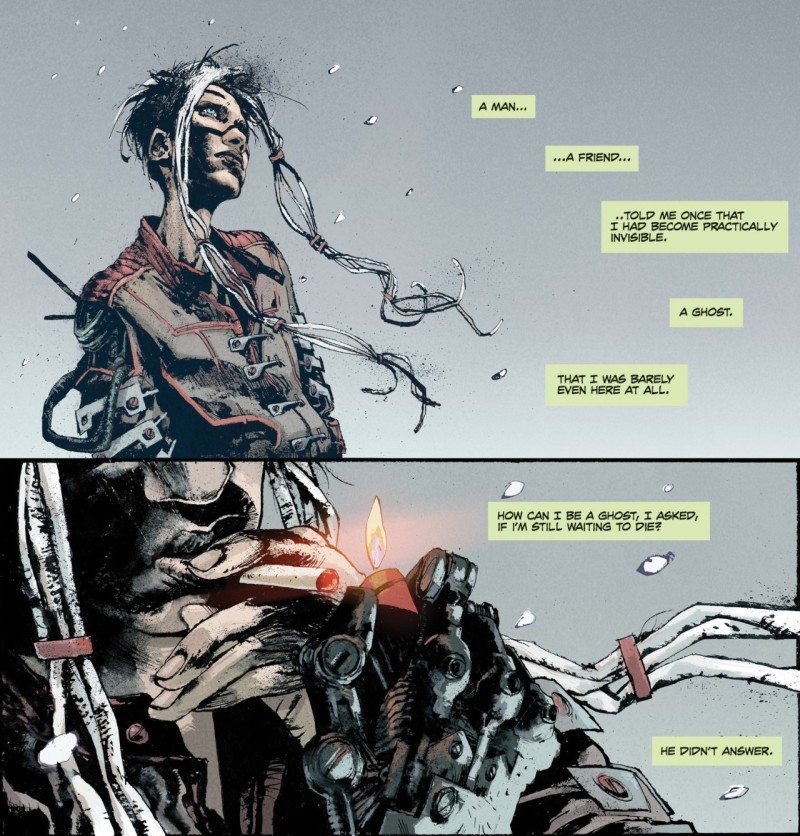 Think “the ghost in the machine” philosophy but with a more literal meaning with undead monsters. The questions we may or may not have about existence, souls, and an afterlife are ones that come up in any narrative that includes technology and the supernatural. Regardless of the deeper philosophical meanings behind this choice, one can really enjoy the interesting duality (pardon the pun) of the two in EMPTY ZONE. But again, this all makes the series cohesive in plot, characterization, and art. Jason Shawn Alexander does not shy away from ambiguity, in fact, he faces it head first and owns it.

READ: ARKHAM MANOR has all the elements you want for darkness and villainy! Never too late to read it! Find out why you should here!

The story is only reinforced by the newness of Jason Shawn Alexander’s characterization and art. In a medium that has so oft made a female protagonist’s sexuality a point of interest in the story, Corinne is unquestioningly a person who has no preference. However unintentional it might have been, it is important to me as a reader that Jason Shawn Alexander succeeds in showing Corinne as Corinne, and not just some sexually subversive, sci-fi chick. In fact, her sexuality appears to be somewhat inconsequential to the complexities of her character. It is neither denied, nor highlighted. Finally.

Corinne White, a fully-fledged humanistic character, is haunted by her dead friends in the form of these strange bionic-zombies, while she tries fruitlessly to swallow her fatal mistakes from the past. A soldier turned data courier, Corinne has to turn around and face her demons, which makes for some very innovative characterization and story. Now let’s talk about Jason Shawn Alexander’s art. 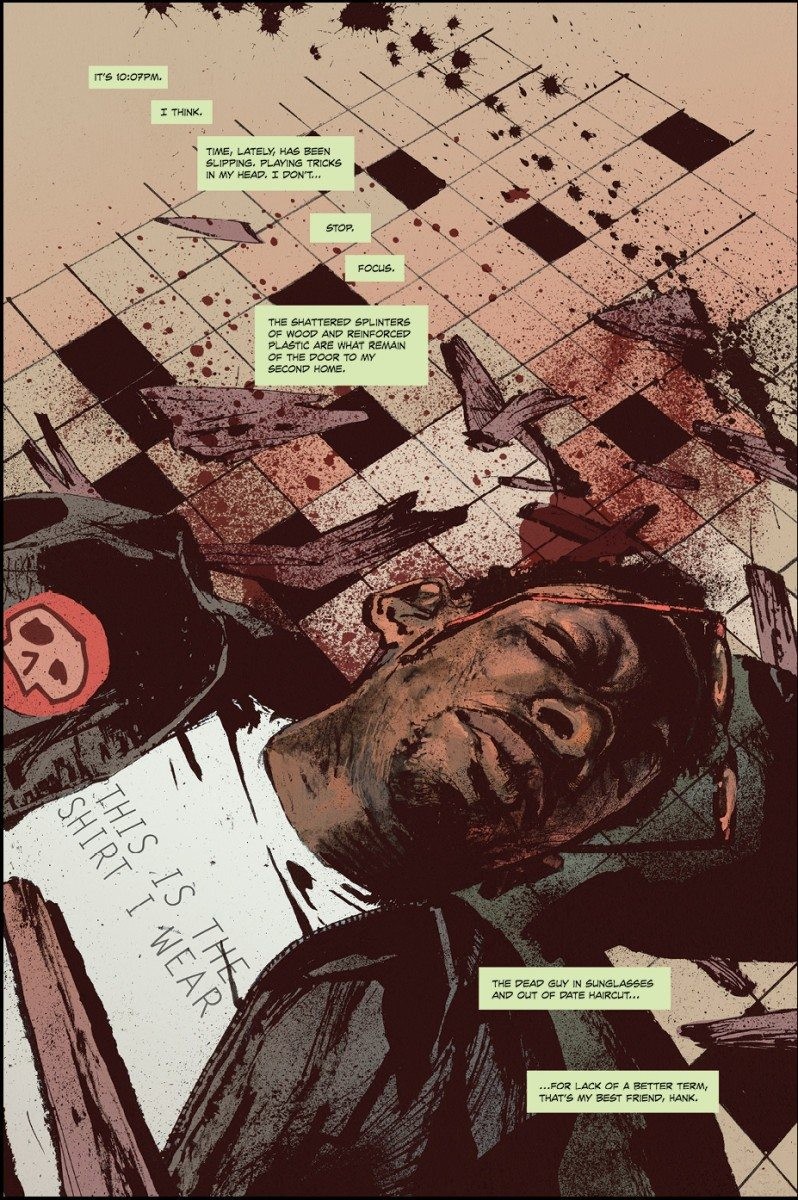 I am simply livid at how talented this man is, not only in that his artistic technique and visual storytelling is amazing in a comic book medium but also how different his style is. Similarly to when you can recognize a musician’s voice immediately, I believe that I will be able to recognize his ink spattering, hyper-realistic art style in future projects. The individualization of his characters show through in his own exploration and execution of his artwork. Such innovation reminds me of Dave McKean, whose art inspired me when I first read ARKHAM ASYLUM: A SERIOUS HOUSE ON SERIOUS EARTH so many years ago.

In short, this comic series inspired me. Do I think that it will do the same for you? Who’s to say. But if you’re a fan of sci-fi, the supernatural, or women who specialize in kicking ass and taking names, EMPTY ZONE VOL. 1: CONVERSATIONS WITH THE DEAD is an easy choice.

Look out for some Cyberpunk weirdness when you go pick up EMPTY ZONE right now.

WATCH: Want more Jason Shawn Alexander? We got to talk to him at NYCC 2015! Check it out!