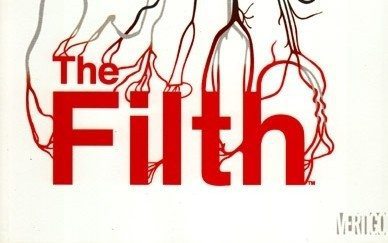 Dildos, ball gags, nipples, and scrotums: these are evoked in the uniforms of ‘The Hand,’ a secret organization operating from under the fabric of reality to intervene when the world is in danger—to take out the trash. At least that’s what Greg Feely is told when he is pulled out of his boring, lonely, porn-obsessed existence and recruited back into their service as Ned Slade. Trouble is, Ned…err, Greg…kinda liked his old personality, and is finding it hard to get a grip on the ultra-violent-psycho-sexual “reality” that keeps becoming stranger every minute…before periodically sending him home. Is Greg losing his lonely, fetishistic mind, or is The Hand real, and he their agent?

This is the premise from which writer Grant Morrison launches his full-sail philosophical and visual assault on comics, a feat that demonstrates their ability to push artistic boundaries in ways other mediums can’t. This is ‘The Filth’.

Morrison’s story is told in 13 issues, each compellingly bizarre and original, which form a complete narrative arc. It’s tempting to sit here and list all the craziness inside, but we’ve seen bizarre and original before from Morrison. So the important question is: What makes this one so important?

Narratively, Morrison uses the persona of the protagonist to make the multiple levels of reality he’s layering seem as if they could just be reflections of what preoccupies his mind. But how real it all is doesn’t matter. Every bizarre character and action we see speaks to the taboo hauntings of our own society; we are either drawn to them or repelled by them. Morrison also writes in visual tricks which take advantage of the panel-and-page format. He breaks the fourth wall to engage us in the questions of the comic-book-reading, smut-ingesting characters…why are we still reading this? What is drawing us in? What don’t we know about ourselves? Of course, Morrison never takes himself too seriously, and is perfectly willing to take the piss out of his own musings, lending the series a light, accessible air.

These are the kinds of works that should be paid attention to in comics. This is the kind of writing that elevates the medium. Throw this on your shelf next to Watchmen and Maus, and read it every once in a while to remind yourself: we’re all a little filthy.