It’s been a rough time period for the action movie in Hollywood. While they were once a flourishing source of entertainment, it now feels like the genre has become a shell of its former self. Despite a handful of gems having appeared in recent years, such as THE RAID: REDEMPTION, FAST FIVE, and MAD MAX: FURY ROAD (winner of six Academy Awards), it feels like the majority of recent action movies have forgotten what used to make the genre so good. With the eagerly-anticipated JOHN WICK: CHAPTER 2 in theaters, it’s worth looking back at the original JOHN WICK and analyzing its cinematic elements in order to figure out what elevated it from a decent action movie to a great movie regardless of genre. Hopefully, by picking apart its best qualities we can shed some light on where Hollywood has gone astray in recent years and how they can eventually get back on track. 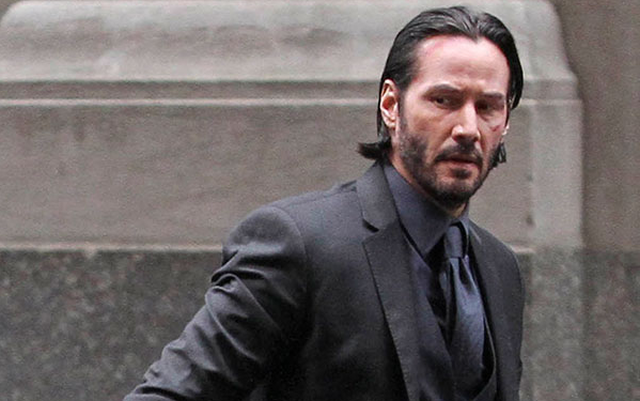 It might be easy for Hollywood to forget this, considering they think action movie fans are just here for the action, but any good movie needs to have good characters. If we aren’t invested in the plight of our main protagonist, then it isn’t worth caring about the rest of the film. For example, the original DIE HARD takes its time in developing its protagonist, John McClane, as something of an everyman action hero compared to the overly-buffed Stallones and Schwarzeneggers of the ’80s. He was a relatable character: a New York cop who came to L.A. not to kick ass, but simply to patch things up in his marriage. The film spends at least the first half an hour depicting McClane as someone who is both realistic and vulnerable, so when the action takes center stage, his plight holds genuine weight. It is because we sympathize with his desire to rekindle things with his wife and because he is a hero who can be physically injured, rather than take a thousand bullets to the chest without flinching, that we want to see our hero emerge victorious. 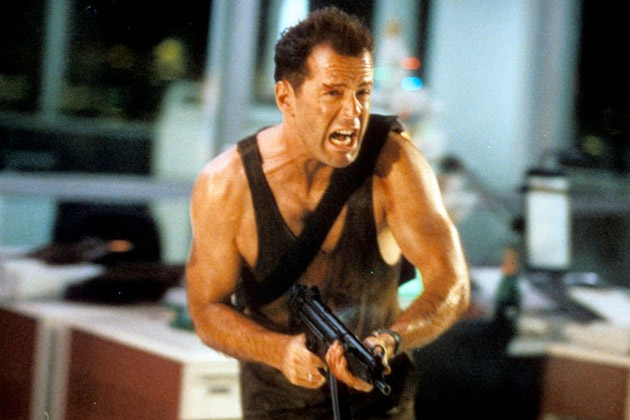 Similar to good McClane, John Wick is introduced to us as someone with whom the audience can empathize throughout his film-long murder spree. The man might have been a former hitman, but he is also grieving the loss of his wife, having received a puppy from her as a means of coping with his loss. That dog holds a personal significance to him, as it is the last remaining tie to the woman whom he loved so very much. So when the dog is cruelly murdered, not only do we get angry at the idea of an animal being killed for something as petty as revenge, but we also realize just how much that puppy meant to Wick as well. Hence his revenge quest, while insanely brutal, can seem justified by what we have learned about him as a character. Wick was someone who wanted to leave his former life behind, but instead got pulled back into it for tragic reasons.

READ: Does the patriarchal, macho Rambo figure inspire toxic masculinity in action movies? Here’s what needs to be done in order to rectify this problem

Granted, the antagonists in JOHN WICK aren’t the strongest compared to those in other action films. The Russian crime syndicate boss Viggo Tarasov and his son Iosef don’t have the memorability that we’ve seen in villains like DIE HARD‘s Hans Gruber or the T-1000 from THE TERMINATOR 2: JUDGEMENT DAY. They also lack the compelling depth that existed in a character like the Joker in THE DARK KNIGHT, someone who commits acts of violence not out of personal gain or profit, but simply to spread chaos. In other words, they simply serve as a plot device to force John Wick out of retirement. So what makes them good antagonists, if not great ones?

The thing that makes them good antagonists is that, despite being the source of John Wick’s vengeance, they are written as somewhat sympathetic characters. Not wholly sympathetic, as Iosef is little more than an arrogant, pampered child who willingly killed Wick’s dog, but you get the sense that this mistake has put him in a situation beyond his control. However, Viggo, despite being the leader of a crime organization, makes numerous unsuccessful attempts to persuade him from going through with this attack on his son and syndicate. From the way he talks about Wick as a protagonist, you get the sense that Viggo respects John and knows all too well what he is capable of as a killer, thus hoping that there is a chance he can stop this bloodshed before it even begins. There is something of a tragic edge to the relationship between hero and antagonist, as this one mistake ruins the twisted bond they shared with one another for good.

Do action movies need to create an entire culture in their two-hour runtime, a la STAR WARS? Not always, but it is necessary to establish that the universe feels real. The film must set up a series of rules that act as the logic within which the movie operates, building them up over the course of the film as our hero’s conflict escalates. These rules cannot be changed or broken, for that would obscure the film logic that we as an audience have come to understand, which pulls us out of the immersion. At the same time, the film has a story to tell and cannot resort to filling in every little detail about the world and its rules to the audience, since that would come across as pointless exposition. For an action movie, the best approach to world building should come from the actions of its characters, establishing their places in society through brief moments of dialogue or physical/verbal cues and then trust the audience to fill in the gaps. 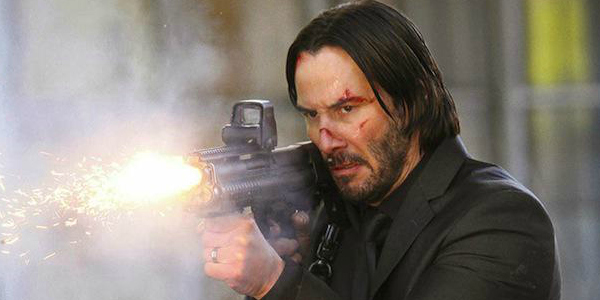 The world of JOHN WICK introduces viewers to something rather unique: a secret underground society of hit men and assassins, complete with its own set of rules and regulations. We witness Wick take up residence in a hotel that acts as a meeting ground for criminals, as well as a safe zone in which violence amongst employers is forbidden. They pay with a special set of gold coins that act as currency for residence, weapons, and even paying the concierge to take care of bodies in your room. It’s the kind of world that you would find in the pages of a graphic novel, an honor among criminal society where a failure to abide by the rules is punishable by death. Absurd as it may be, the attention to detail by the writers and director make the world that John Wick inhabits feel believable, allowing the audience to dip their toe in this universe without ever detracting from the story.

This is probably the biggest problem that the majority of modern action films have forgotten how to do properly: make the action scenes work. There are multiple factors involved in why directors fail to properly execute these scenes (i.e. poor editing, focus on shaky-cam, overabundance of CGI), but perhaps the biggest factor is that the action lacks weight. When the bullets fly and the fists are thrown between our hero, antagonist, and numerous faceless goons, it rarely feels like it matters. A good action scene must come with a set of stakes that the protagonist needs to overcome so that his journey means something. A scene can feature as much impressive choreography and elaborate set pieces as it wants, but unless we care about what is happening, it won’t matter at all.

READ: What steps should the action genre take to give its make its choreography hold weight? Let’s look to the IP MAN trilogy for advice

Perhaps the best example of this distance between action and audience is the Darth Maul lightsaber fight in STAR WARS: THE PHANTOM MENACE, considered by many to be the one good scene in a poorly done film. The fight is well choreographed, is more kinetic compared to lightsaber battles in the original trilogy, and is backed up by the haunting score of John William’s “Duel of the Fates” to raise the tension. Yet the one thing holding the scene back is how little we really know about these characters and their motivations for fighting in the first place. By contrast, while the Obi-Wan/Vader fight in A NEW HOPE is little more than two guys tapping their swords together, the dialogue they exchange throughout the fight, combined with the build-up of their relationship over the course of the film, gives the battle more impact. When Obi-Wan is struck down, you feel devastated for Luke’s character. When Maul kills Qui-Gon, you probably end up thinking, “Well, he’s dead now.” 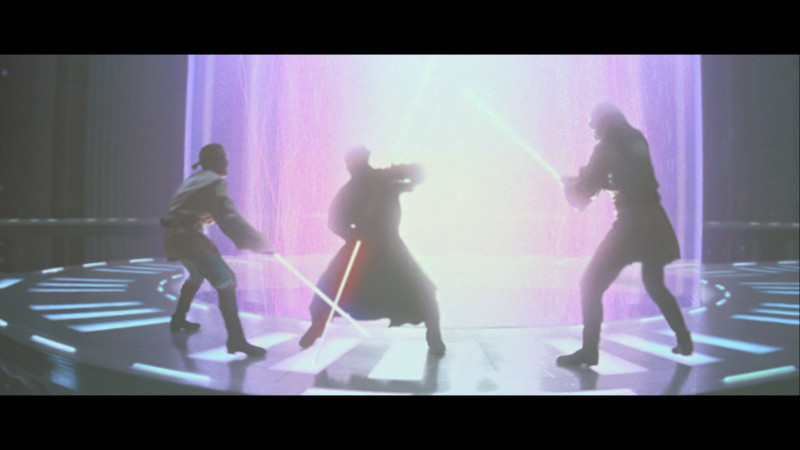 Adding onto this is the action itself and how it is choreographed. When it comes to fight sequences, most people would prefer practical, hand-to-hand combat to some overly extensive CGI battle because it feels more real. That doesn’t mean CGI should not be allowed in a movie, but it should be used as a tool to enhance the scene in post-production, not encompass the fight scene to the point that the fight itself becomes obsolete. The best metaphor I can give to CGI, oddly enough, are those explosions that Michael Bay loves to spend his budget on. They work well enough in the background, but when placed front and center they distract the audience from what matters. When the fighting and action are done practically, the audience takes notice and interprets the sequence as an example of the main character placing his life on the line for a shot. Hence why something like Tom Hardy jumping off of an exploding tanker in FURY ROAD or Tom Cruise scaling the Burj Khalifa in MISSION IMPOSSIBLE: GHOST PROTOCOL feels more impactful than two robots duking it out in the TRANSFORMERS films.

As for the action in JOHN WICK, it’s practical plus the cinematography and Keanu Reeves’ physical performance make you realize just how much each fight is planned out. It’s kind of insane just how much John Wick lands a headshot on people, as if he somehow managed to unlock a cheat that allowed him to one-hit-kill everyone in CALL OF DUTY multiplayer. Yet through the lack of cuts between long and close shots between fights, each and every hit makes their mark and convinces us that this man is worthy of the name Baba Yaga. There are also more subtle details involved, like how Wick reloads his gun after the correct number of hits per clip, to immerse you in the “realism” of his method of attack. (I use the quotes because, despite his physically realistic approach to fighting, the violence itself is crazy, ultra-fast, and never lets up.) But most importantly, the action is fun rather than a chore, feeling less like MODERN WARFARE 3 and more like the new DOOM’s single-player campaign.

READ: Has Hollywood found itself too deep in its need for franchises? Short answer: Unfortunately yes.

JOHN WICK embodies many of the qualities that make up a great action film that Hollywood has either forgotten or tossed aside in favor of delivering easy-to-make box office hits. It has a hero who we can root for, action that never lets up, a world of mystery and intrigue, and a narrative that allows us to root for the protagonist throughout the film. And above all else, JOHN WICK is a fun popcorn flick that shows the dedication of its writers, director, cameramen, and lead actor, all of whom give me hope for the future of the action film genre.