With Kingpin and Bullseye debuting their own series, it’s no surprise to see Elektra back in action. After all, she also played a vital part in Daredevil’s life. In this new storyline titled “Always Bet on Red: Part 1,” the femme fatale is thrown into the hazards of Las Vegas as she goes against the corrupt. With a slick new look and beautifully choreographed action, ELEKTRA #1 proves to be a solid entry for the ninja-assassin.

The pages open with the introduction to Midway Casino in Las Vegas, a popular venue filled with the usual party goers mixed in with gamblers, drug lords, and murderous thrills. Disguising herself with a blonde wig, it’s here that Elektra resides for her latest mission. It’s not clear if Elektra knows who’s pulling all the levers, but she certainly gets the wrong people’s attention. After conversing with the casino’s bartender and witnessing her harsh treatment by the patrons, Elektra strikes on those who are responsible. This isn’t your “friendly neighborhood” kind of superhero, the bodies that Elektra leaves on the floor aren’t going to get back up…like ever! She’s a cold-blooded assassin, but you can’t help cheering every time Elektra goes in for a kill. 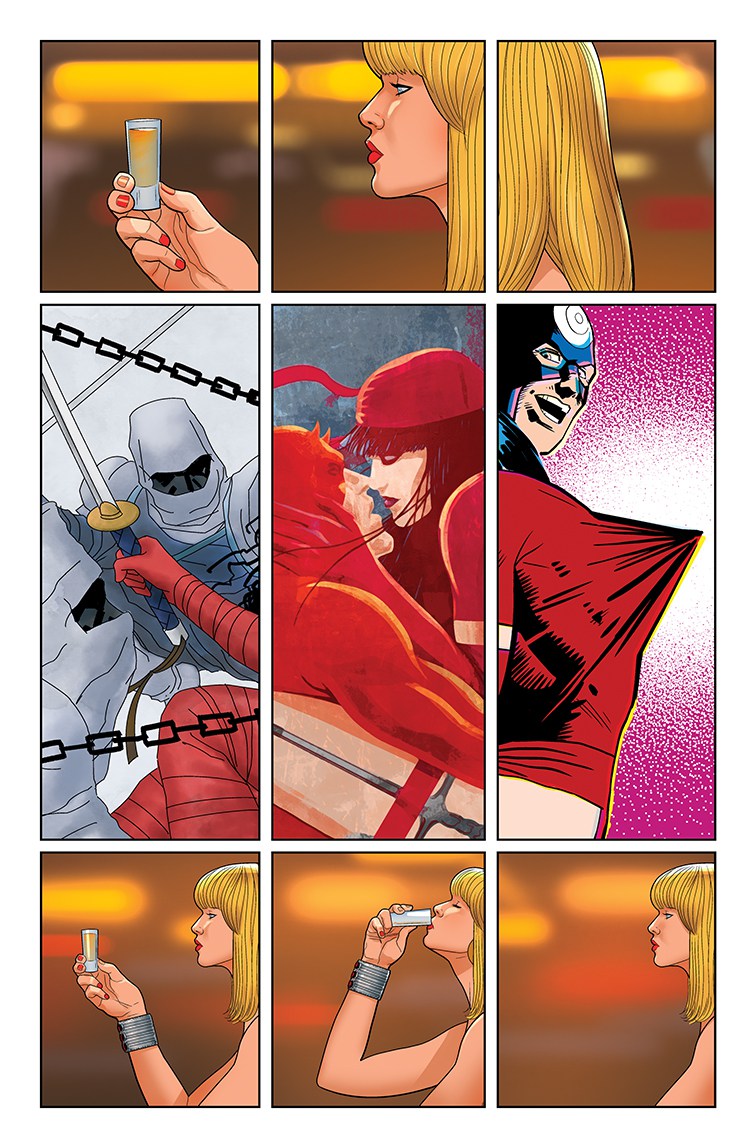 Writer Matt Owens isn’t afraid to tackle Sin City’s notorious reputation of sex, drugs, and violence. You get a glimpse of criminals and their activities, but there’s a bigger evil hidden within the casino, one that Elektra will come face to face with in the coming issues. Aside from the villainous figures in the casino, not much is known about the titular character. The overall issue does a great job in setting up the character’s motive and actions but leaves you wanting more of what Elektra is thinking or feeling. Perhaps she’s running away from her past or trying her best to move on, but there’s some indication through the art and dialogue that Elektra feels lost. The assassin even tells the bartender that she’s still “figuring it out.” To distract Elektra from her own thoughts and for us readers to further scrutinize her, Owens creates the abused bartender that Elektra shows compassion towards and fights for. This same compassion leads to Elektra’s unsparing kills, so it’ll be interesting to see how she develops from here 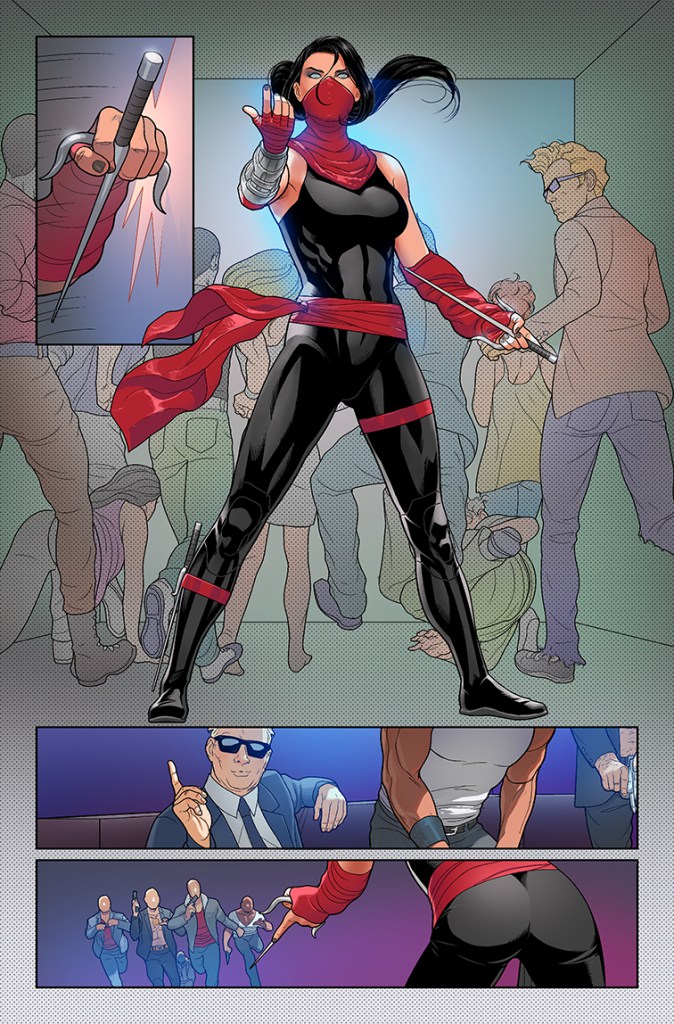 Artist Juan Cabal’s clean and smooth art compliments the neon lights within the casino, while keeping central characters focused during brief moments and dialogue. Cabal’s art also transcends during action-packed fight scenes as Elektra takes out mobsters with stealth and stylized choreography that isn’t afraid to spill some blood. Colorists Antoni Cabela and Marcio Menyz help distinguish scenes by emphasizing different background colors, varying from orange to purple during assassination mode. Fans should also be delighted by Elektra’s new look, which closely resembles the character’s appearance in Netflix’s DAREDEVIL.  By ditching the red outfit and head bandana for a crimson face mask and black tights, the character feels more like a ninja while still highlighting Elektra’s beauty through her dark shadowy eyes.

READ: Find out how Marvel’s IRON FIST can avoid ARROW’s doom and gloom!

While not much is known about Elektra in this first issue, the ninja assassin’s 2017 debut looks very promising. The crimson red lingers as Elektra showcases her new outfit and deadly skills. Stay tuned to find out what happens next as the evil erupting from a corrupted casino puts Elektra’s narrative on exciting and unfamiliar ground.