Marvel is well-known for their consistent schedule of crossover events. Whether you love them or hate them, you are guaranteed at least two or three events every year. Arguably one of Marvel’s best crossovers, though, came in 2014 under the title SPIDER-VERSE. This series brought together Spider-Men and Women from across the multiverse to battle a massive, vampiric threat. Now, with a sequel fast approaching, Marvel is getting readers ready for SPIDER-GEDDON with EDGE OF SPIDER-GEDDON #1. But does it measure up to the excellence of the first installment?

In EDGE OF SPIDER-GEDDON #1, readers get to catch up with Hobie Brown. Known colloquially as Spider-Punk, this Spider-Man comes from a world where its greatest villains are politicians and businessmen. When we first met Hobie in SPIDER-VERSE, he led a team of punk superheroes against Norman Osborn, the corrupt president of the United States. Now, those anti-establishment heroes must reunite as Kang the Movie Mogul arrives on the scene. Spider-Punk and Captain Anarchy come together as Spider-Geddon comes to the Multiverse. 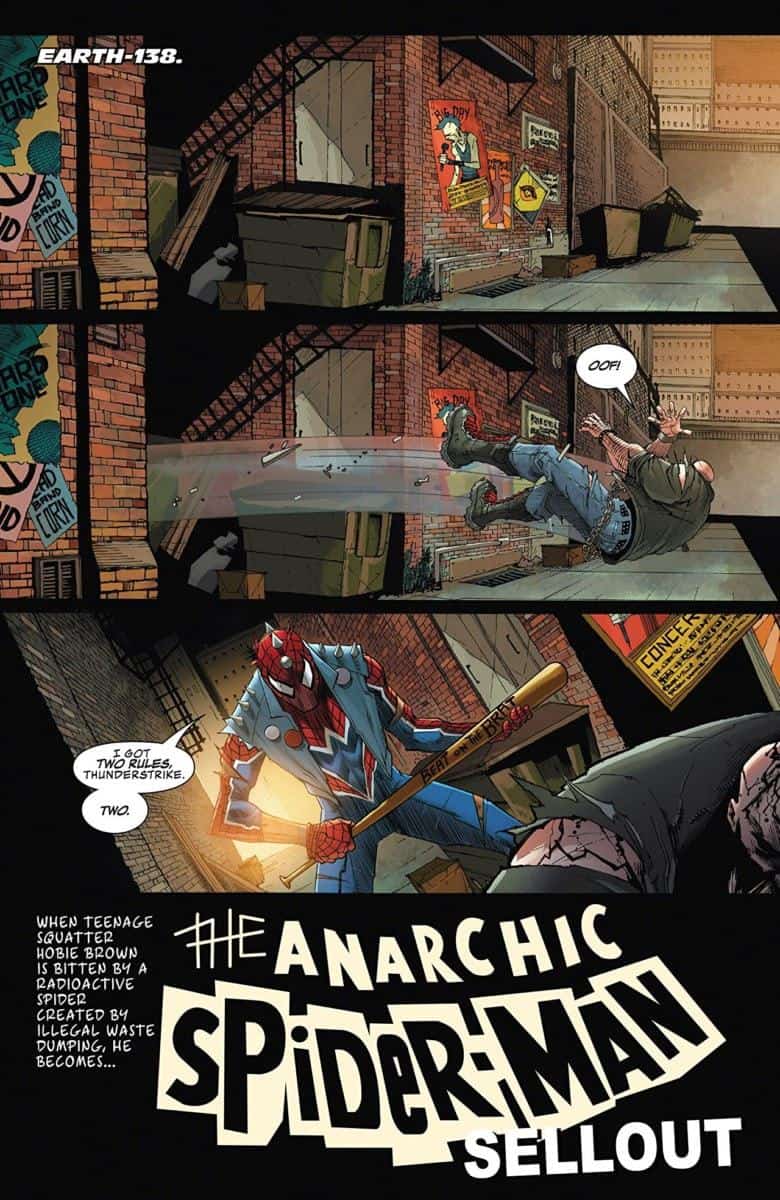 EDGE OF SPIDER-GEDDON #1 is a really fun introduction to the upcoming event. This is an action-packed story that delves into the most ridiculous elements of Spider-Punk’s reality. Writer Jed MacKay does a fantastic job inviting readers into this dimension early on, with fun references to the differences between this world and the main Marvel Universe. In many ways, he captures my favorite aspects of multiversal stories. He doesn’t overload readers with new information. For example, he only drops hints toward Captain Anarchy and Spider-Punk’s origins, and Kang’s motives are simple to understand. This allows MacKay to focus on the one thing that matters in a Spider-Punk story: the action and the ridiculous fun.

One of my sole critiques for EDGE OF SPIDER-GEDDON #1 is that it doesn’t quite have the same style as Spider-Punk’s first appearance. I don’t necessarily mean the visuals, though artist Gerardo Sandoval has a much more traditional comic book style than previous Spider-Punk penciller, Sheldon Vella. What I mean is that this feels more mainstream than the previous story. In Hobie’s first appearance, MacKay made him the leader of a revolution. Spider-Punk embodied the anti-establishment mentality. He was punk rock. That story could only be told through that character’s lens.

In this issue, though, I didn’t feel that same sense of revolution. This businessman Kang could have targeted any other Spider-Man in the multiverse, and this story would still make sense. That isn’t a bad thing, necessarily. In fact, new readers may not notice. But for fans of the first Spider-Punk installment, this may be a bit disappointing.

The Man Behind the Mask 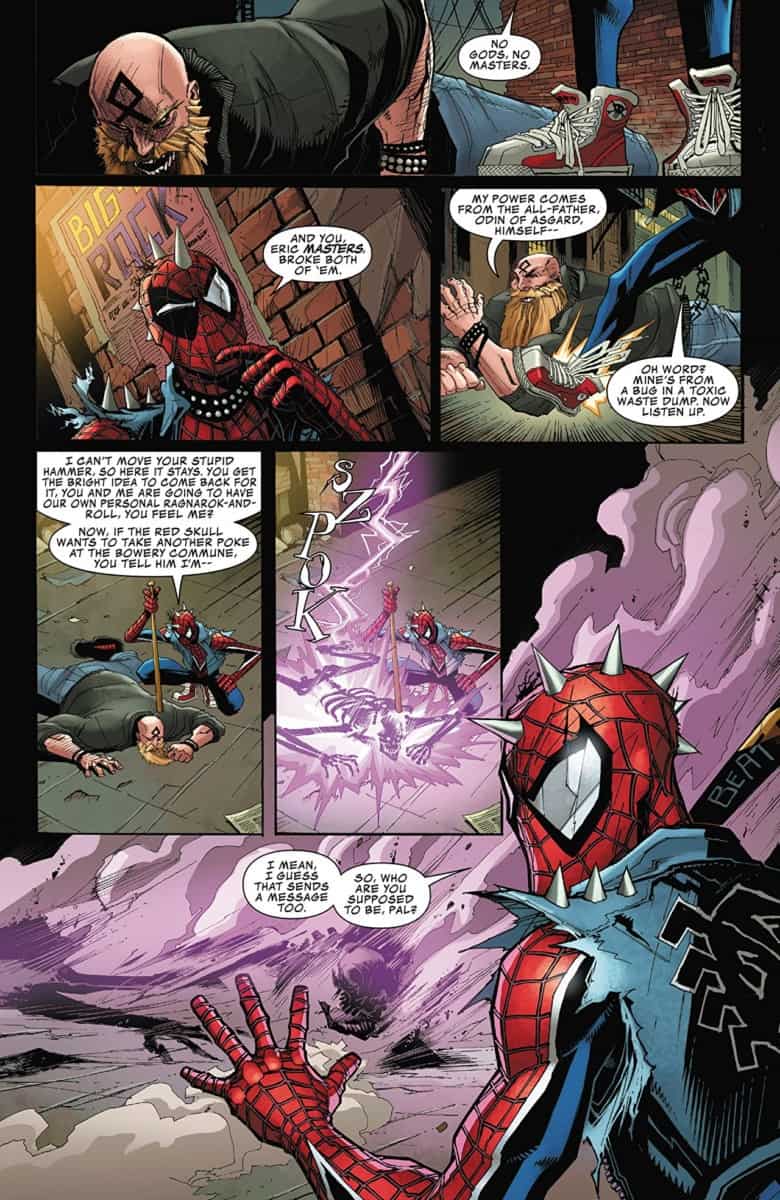 In terms of characterization, I was surprised by how well EDGE OF SPIDER-GEDDON #1 handles its large cast. Now, we don’t delve into the depths of these characters’ souls. However, there is a deep sense of personality in these pages. It isn’t perfect, and I feel like MacKay could have brought it out some more.

Nevertheless, I really enjoyed the character interactions from the very beginning. I especially loved the conversation between Hobie and Robbie Banner, the Punk-Hulk. The way Robbie questions Hobie’s priorities feels incredibly poignant. Especially considering that the first thing we hear from Spider-Punk in this issue is “No Gods, No Masters,” the fact that he could fail this creed hits hard.

I also really enjoyed the work with Kang. Again, it isn’t perfect. As I said, he has very simple motivations and very little actual personality. However, as a parody of mass market media, I found this simplicity rather endearing. Kang is a corporate sell-out attempting to use Spider-Punk’s revolutionary ideals as a way to make money. In many ways, this seems highly ridiculous, but again, Kang plays the satire well. I definitely wanted to know more about this character. For the little Jed MacKay shares, he stoked my interest. He made me want to explore this character in other stories, and that speaks a lot for Kang’s characterization. 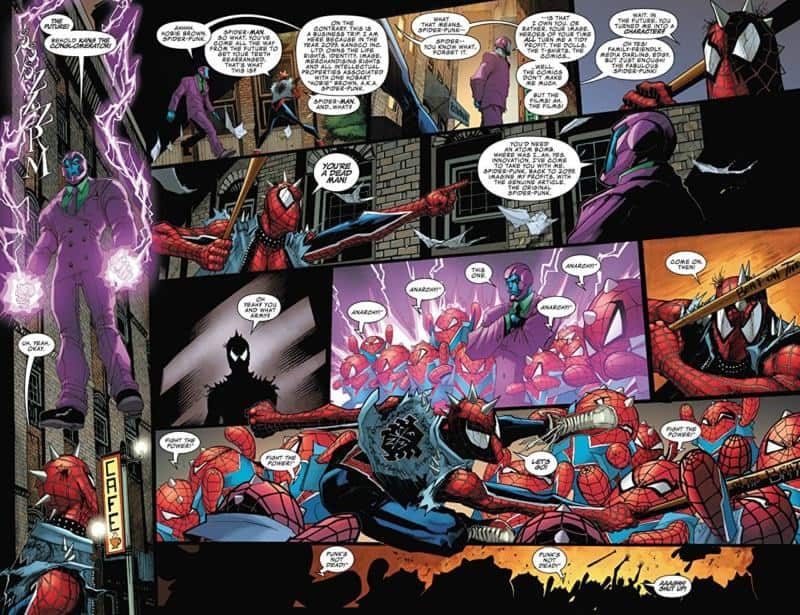 I mentioned earlier that Gerardo Sandoval’s art is much more mainstream than previous Spider-Punk artists. Let me explain that this is in no way a criticism. Sandoval does an utterly fantastic job in EDGE OF SPIDER-GEDDON #1. His character art is absolutely beautiful, and he does a brilliant job choreographing this issue’s many action sequences. I especially loved his environment art. The New York that Sandoval creates is extremely gritty and dark, perfectly representative of the injustices Hobie is trying to fight. It wholly differs from the almost fairy-tale New York of Earth-616.

EDGE OF SPIDER-GEDDON #1 is a fun introduction to the upcoming SPIDER-GEDDON event series. It isn’t perfect. Jed MacKay’s story doesn’t quite match the same fervor and energy of his previous Spider-Punk work. However, I still feel like this is a noteworthy and interesting story. The way MacKay parodies modern media through Kang the Conglomerator feels both poignant and funny. Also, the art by Gerardo Sandoval by itself makes this issue a must read. For fans of multiversal stories and of SPIDER-VERSE, you’ll find yourself right at home with this book!