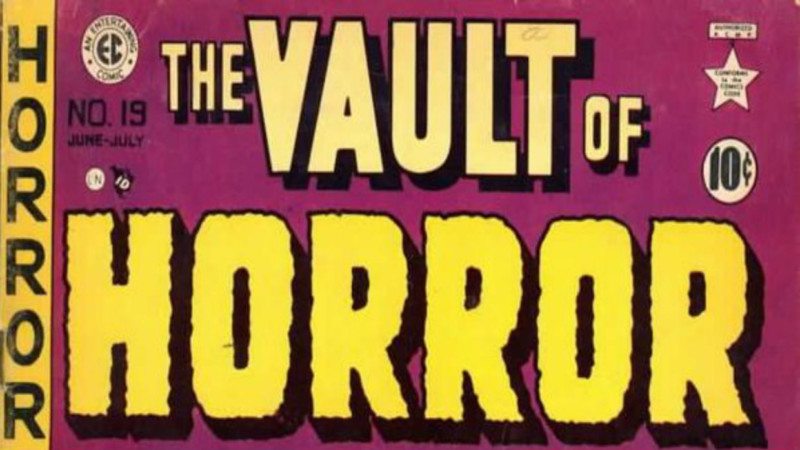 At the height of the Golden Age of comics (typically defined as the late 1930s to mid-1950s), it was easy to find comics of every genre. There were superheroes, of course, but there were also westerns, romances, science fiction, war and military fiction, and teen comedy romances. Like literature and films, comics were telling stories on every genre, but it was the horror comics from the company EC Comics that left an indelible artistic mark on the comic book industry.

EC Comics was one of a myriad of comic book companies dating from the 40’s into the 50’s, but when editor Bill Gaines released a new line of horror books, he unleashed an artistic and creative movement and a statement about freedom of speech in comics that would echo through comics for generations to come. EC made shockingly grotesque horror and violence its primary mission statement, and it was the lurid covers that stood out on newsstands and promised untold terrors within the four-colored images.

Gaines was unique in the publishing world at that time, primarily because he allowed the artists to maintain their creative visions. Each issue of EC Comics has the cover artist’s name somewhere in the bottom right corner. At the time, this action was unheard of. Creative figures in comics were treated poorly in both pay and artistic expression. Gaines on the other hand, according to David Hajdu’s book THE TEN-CENT PLAGUE (an essential text on the end of the Golden Age of comics), paid better than his competitors and “he encouraged artists to use their own styles, rather than adapt their work to a ‘house look’; he had them ink their own pencil drawings to retain their personality.” Gaines knew that the audience was spoiled for options and knew if you wanted their money you first had to get their attention. In many ways, he was a visionary for how the comic industry would evolve into a more artist driven medium, with the rise of creator-owned companies like Image Comics in the later part of the century up to the modern day.

CLICK: Who doesn’t love a good monster? Check out our analysis of the sympathetic monster in fiction.

By encouraging this level of artistic license, EC became a wholly unique creative force. Following the traditions of the Grand-Guignol or the penny dreadfuls, EC embraced the beauty in fear. The boundaries pushed in EC’s horror comics became a flashpoint for freedom of expression in comics and EC became the company to lead the charge in allowing comics to break free from the realm of disposable children’s distractions to an art form. Through these macabre stories, they revolutionized how comics could look as well as how comics were received by the public at large.

Judging by a Cover

The creative freedom given to EC’s artists can be seen right from the iconic covers. They are designed with massive type on a solid colored background hovering above a tableau of terror and have become synonymous with both EC comics and the delightfully lurid stories that unfolded in their pages. Any cover paying homage to an EC cover is easily recognizable because of these distinct features.

The covers themselves, which were brought to life through artists like Graham Ingles, Al Feldstein, Jack Davis, Johnny Craig, and Wally Wood, would jump to life from the newsstands. Look at issue 17 of THE CRYPT OF TERROR where EC mainstay Johnny Craig lays out a textbook EC horror cover:

This cover creates a complete story that is left entirely up to the reader to interpret and piece together: the newspaper headline warning of a werewolf, the beautiful woman, the alley-cat, and the lurking shadowy figure. In many ways, these covers made full use of the potential in comic book storytelling. Rather than bog down the stunning line work from their vast array of talent, the images were allowed to breathe and exist as storytelling devices in their own right. Compare this to just about any comic from the Golden Age that tends to be inundated with text that chokes the art in the gutters and cuts off the creative work of the art team.

When EC covers did use text, it was added in a flash fiction-style that conveyed an entire story in just a few words perfectly wedded to the cover’s imagery. Take issue 19 of VAULT OF HORROR:

Much like the first TALES FROM THE CRYPT issue, so much is conveyed purely through visuals. A mysterious forest, a beautiful young girl (sensing a pattern?), and a malformed, shambling corpse. That alone would be enough, but the dialogue box adds in the classic EC horror twist. This isn’t any old damsel about to be distressed. The reader is treated to a complete Monkey’s Paw story in one visual image. This is the comic book equivalent of the famous six-word story “For Sale: baby shoes, never worn.” What EC does best with their covers is what comics do better than almost any other medium: tell a story with nothing more than pictures and a few well-chosen words. However, the beautiful exteriors of EC comics would mean nothing to its legacy without the groundbreaking artistry of the comics inside. The covers made them famous, but the stories and art made them infamous.

The Golden Age of comics brought a nearly endless supply of creativity to newsstands across the country and created an entirely new art form. But like all forms of art, it had its trend chasers and imitators. Comics were seen as little more than disposable entertainment, which led to books that were churned out with little care for artistic quality in the hopes of making a quick buck. Will Eisner’s work on THE SPIRIT newspaper strip is widely recognized as being one of the major sources of comic book innovation from this time period, but the work of EC Comic artists cannot be understated. However, the works of three particular artists, Jack Davis, Al Feldstein, and Johnny Craig, were so on the edge of what was considered acceptable that it teetered EC Comics into oblivion with the rise of the Comics Code Authority.

CLICK: Go inside one of the darkest minds in American history to find out what made Ed Gein tick!

To amplify the horror of his work, Jack Davis rejected realism entirely. Davis seemed to be the personification of the word “cartoonish.” His art was heavily stylized but pleasant and fun to look at. No zombie ever looks quite as good as a Jack Davis zombie, and no two Jack Davis zombies looked quite the same. He managed to draw rotting and torn flesh in a way that made the images seem like they would stink of death. It was his work on the short story FOUL PLAY from HAUNT OF FEAR #19 along with writer Al Feldstein, that garnered him the most attention. Like many EC stories, it starts in a rather wholesome and conventional location, a baseball game; things take a dark turn, there’s murder by poisoned baseball cleats, and it all ends with the murdered player’s teammates dishing out vigilante justice.

The final panels (pictured above) reveal the team members using the dismembered body parts of their victim as baseball equipment. The images are chilling and wouldn’t be out of place in a modern Eli Roth movie. Davis’s grotesque detail on the bloodied appendages is disgusting, but it’s impossible for the reader to tear themselves away from its commitment to gore. This story was specifically targeted by Dr. Fredric Wertham in his book SEDUCTION OF THE INNOCENT, a largely debunked psychological study on the negative effects of comic books on the juvenile mind. Wertham’s crusade against comics can be traced back to the horror and crime comics of EC and became a major target when his work brought about the inception of the Comics Code Authority.

Dr. Fredric Wertham’s research created such a fervor from concerned parents that comics became a target of bonfires. Eventually, the outrage led to Senate judiciary hearings that pressured publishers to create the Association of Comic Magazine Publishers (ACMP). Much like the modern MPAA does with movies, the ACMP created the Comics Code Authority to regulate their content without being required to submit to government control. If a comic didn’t receive the Code’s seal of approval, if would not be published. (X)

During the Senate judicial hearings that led to the eventual formation of the Comics Code, Johnny Craig’s work was called into question. As mentioned before, Craig was one of the best of EC’s cover artists. Ironically, the cover that caused the most shock for the judicial committee was his cover to CRIME SUSPENSTORIES #22:

The cover’s graphic nature caused alarm among the committee members and led to this priceless exchange between Representative Estes Kefauver and EC publisher Bill Gaines. Kefauver asked Gaines if he felt the cover was in “good taste.” Gaines’ replied:

Gaines’ defense shows the kind of spirit that emboldened EC’s artists. Unfortunately, their pioneering artistic spirit was crushed by the Comics Code, as the censorship board created a list of rules and regulations that seemed developed with the specific intention of destroying EC. A lack of ideas would never be EC’s problem, but Gaines and one of his best creatives, Al Feldstein, would find themselves suffocating within the Comics Code’s guidelines.

Writer and artist Al Feldstein had a refined style compared to some of his EC peers, but that sleek pencil work created images that were equally realistic and cartoonish. These not-quite-R rated depictions of the human form amplified the terror.

Feldstein was also one of EC’s writers who stood up to the Comics Code as it was slowly tightening its grip on the regulations and standards that comics now had to uphold. Many of the rules the Comics Code came up with seemed directly aimed at destroying what was left of EC. Rules like: “No magazine shall use the word ‘horror’ or ‘terror’ in its title” constrained EC’s output. (X) There were also hyper-specific criticisms that forbid publishers from using violent imagery and rules and the ban of “walking dead, torture, vampires and vampirism, ghouls, cannibalism, and werewolfism…” (X) Feldstein, who was never a fan of the Comics Code, finally lost his composure when the Code found a ludicrous reason to reject a story. The story, JUDGEMENT DAY (for more on how this unfolded, check out part 2 of this article), contains a harmless twist, but still caused controversy among the Code committee. Feldstein’s willingness to fight for creative expression is admirable for both comics and artists as a whole.

CLICK: Check out our discussion about why horror movie characters make idiotic choices!

While they may not have been appreciated artistically in their time, EC Comics and its bevy of unspeakably talented creators shaped comics, especially horror comics, for years to come. The covers and panels of EC’s horror books captured a type of horror that could only come from comics: colorful and grotesque, gory and playful, sinister and unforgettable.

True, the material is shocking, even by today’s standards, but the story of EC is the story of artists using horror stories to rebel against the juggernaut of censorship. They were creators without fear who redefined the horror genre for an entire medium and proved the artistic merit of horror fiction and comics by becoming champions of free speech to ensure the artistic expression we allow today. Not bad for a group of people who just wanted to tell a few spooky stories.