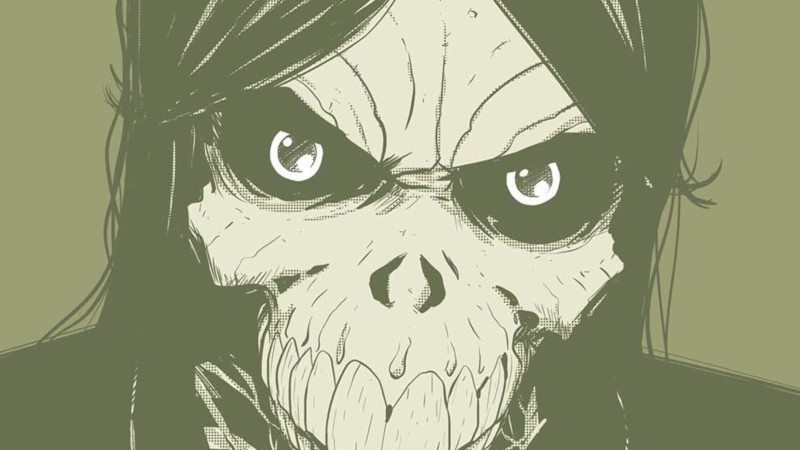 EAST OF WEST #30 kicks off “The Apocalypse: Year Three” story arc. The past five issues have really set the stage for the epic impending war, and this issue does not disappoint with continuing that trend. Jonathan Hickman has done an excellent job of spacing out his individual narratives to create a well structured web of stories that all connect in some fashion or another. This, along with the deep and thoughtful history of this world, has been what has made this series so great. EAST OF WEST #30 is a buildup issue that leaves the overall plot with many potential routes to take. However, what path will it follow? 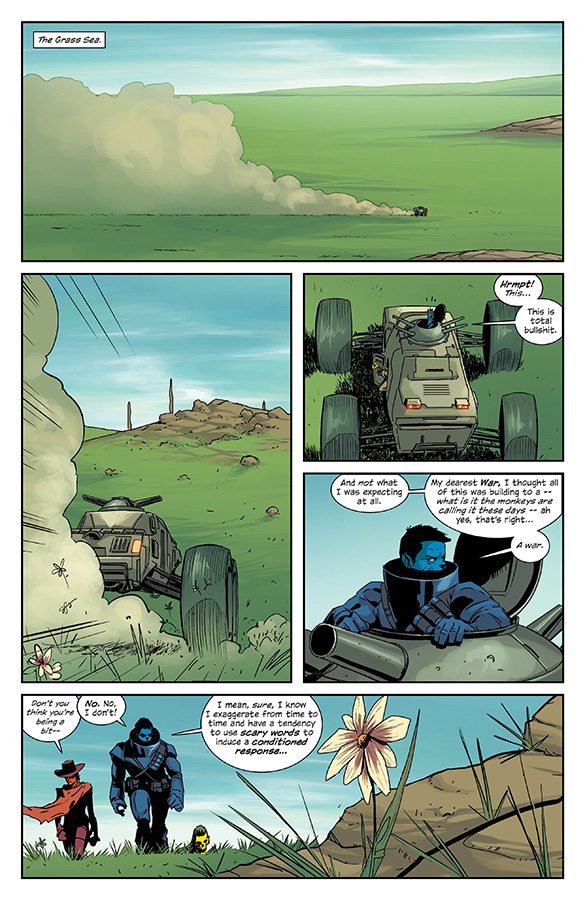 The issue begins with War, Conquest, and Famine traveling in a tank across an area known as the Grass Sea. We now have a much better look at their evolved forms after their transformation completed in issue #29. Conquest (who has grown back his foot) does the majority of talking as he speaks of his disappointment in the peaceful scenery around them. Eventually the three come across dead soldiers who were killed in an ambush, and the lone survivor begs for a quick death from the three. War, however, explains how that is not how they do things and instead argues that feelings such as pain should be extended and agonized over.

READ: New to Image? Here’s why we think it’s such an excellent publisher!

Meanwhile, the Prophet Ezra’s army of pilgrims surrounds the Machine City of the Endless Nation in a very intimidating manner. The Endless Nation council, under the dictation of Chief Narsimha, contemplates what to do, with the majority agreeing that they are concerned with what little action the Endless Nation is taking. Narsimha soon confirms that he has two plans in mind. The primary plan is attempting to speak with Ezra in order to call off the war, stating this is the best and safest course of action. The second, if the primary plan fails, is to crush the invaders with warships that have been strategically placed outside of the Endless Nation to combat these religious maniacs.

When Narsimha and Crow (who has taken a stand next to Narsimha) leave to confront this invading army, they are greeted by none other than Wolf, who survived his epic battle with Ezra. He explains what had happened, and we are given flashback sequences that have been typical in the EAST OF WEST series. The outcome of the battle was quite interesting, but without going into spoilers, it’s important to just know that Wolf’s role in this chaos has dramatically increased, and I’m interested in what his reunion with Death in the coming issues will be like. As Wolf and Crow embrace each other, the coming future is all the two can talk about, along with the integral role that Wolf will play.

As a whole, this issue is fantastic. It quenches my thirst of wanting to know how the battle between Wolf and Ezra would end. In a way, it only leaves me more curious of Wolf’s role in the final conflict. Though, I must say, while I do enjoy this issue very much, I hoped to see interaction between Death and his son, Babylon, as we did in EAST OF WEST #29. Hickman is obviously drawing all of his plots out, but even a few panels would have been an adequate tease. It’s possible Hickman will devote an entire issue to those two in the next chapter, as he did in issue #29. I’m hopeful for this because Death’s search for his son has been such a driving force in this series.

READ: Enjoy Jonathan Hickman? Here’s what we thought of his finale to SECRET WARS!

The art is stellar as ever. Nick Dragotta has only improved with each issue he’s drawn. Specifically, in EAST OF WEST #30, Dragotta’s ability to imagine and capture vast spaces such as the Grass Sea is impressive, and his interpretation of facial features and expressions always has me believing what the characters are saying and feeling. There is a point in this issue where Crow and Wolf are together and speaking of the situation at hand. On the final page, the rare smile that Dragotta places on a usually somber Crow’s face, as she and Wolf hold hands, has all of the love and unknowing between them spring to life. Rus Wooton’s black and white shading of Wolf and Crow in this scene has the two characters contrast greatly with the colorful scene around them. I’m always drawn in when Wooton is only working with one or two colors on a character, as is seen with the Four Horsemen, Wolf, and Crow. This almost always catches my eye and the detail of the characters, consequently appear more pronounced. 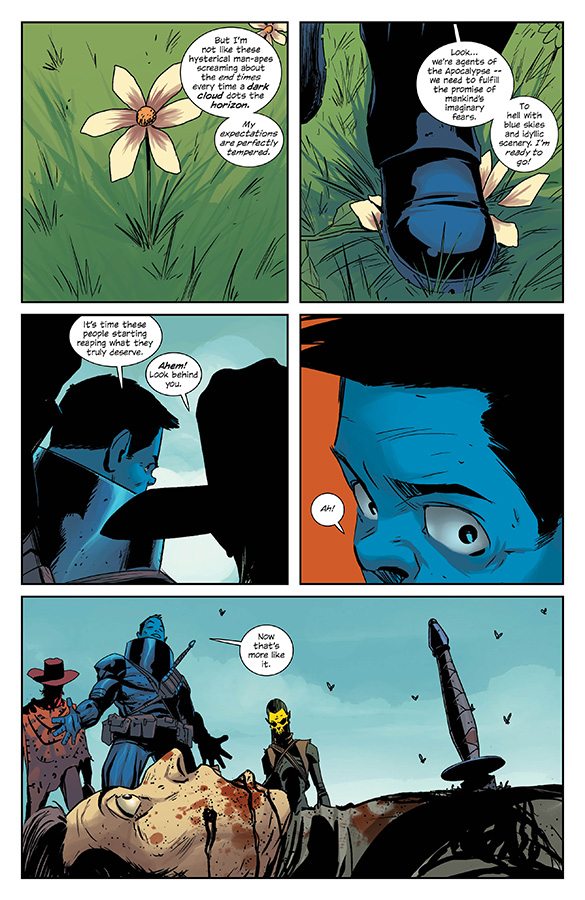 If you’ve been interested in where this story has been going, you’re going to enjoy this issue tremendously. It once again makes War, Conquest, and Famine relevant with purpose, and their aged appearances only make them appear even more deadly. In Hickman style, there are many plot lines that are being addressed slowly. But if his reputation of writing impressive epics continues in this series, it’s safe to say that all of our questions will be satisfactorily answered in the conclusion of “The Apocalypse: Year Three.” Based on what issue #30 shows me, I believe we as fans are about to witness a true war to end all wars.