One of the biggest controversies of the year has been “fake” news. From CNN, to Fox News, to independent websites, many are questioning whether news sources are truly reliable. This is because there have been instances of information being omitted, unchecked, or falsified, creating a false narrative. This is particularly alarming because there are those out there who have no qualms spreading a lie and have no regard of its repercussions. Because of this, the public has been split, questioning who’s trustworthy and who’s not. Things have become rather complicated this year, and EARTHA explores the problem of news and reminds readers how to trust again.

Written and drawn by Cathy Malkasian, EARTHA is a story set in a fairytale world where a number of bizarre things run about, like talking animals and physically-manifested dreams. Despite all these oddities, it still hits home with a message highlighting the significance of empathy and honesty. The story follows a girl named Eartha, who lives in the land of Echo Fjord, where residents were once accustomed to being visited by the dreams of city folk from across the sea. However, it seems that the dreams have become scarce. Fearful of what may have happened to the city, Eartha ventures off to figure out what is afoot and finds that the citizens have fallen victim to biscuits with small messages from the outside world on them. With nothing but compassion, Eartha must free everyone from the biscuits’ grip and bring back the dreams.

From the get-go, the comic expresses how society can be obsessed with news. This is evident when Eartha reaches the city and finds that the people are disassociated from one another, focused exclusively on their biscuits. When she approaches them or questions their pastry, she is quickly labeled a threat or a liar.  This, of course, is a comparison to how many pick and choose who to listen to and how impractical news sources can be. It seems fanatical that one would take the word of a biscuit over a person, but considering the odd sources people will trust these days, is there much of a difference? But let it be said that the comic does not patronize the biscuit-eaters. Instead, it portrays them as people who want to be aware of the world around them and want to be critical. It shows that it’s not uncommon for people to want to be enlightened. A character named Betty, a talking cat, best expresses this desire, “Nobody sleeps! Afraid they’ll miss out. They don’t travel outside the city, afraid of missing their news from outside the city. They want to be here, yet they’d rather be anywhere but here!” So no one is necessarily wrong for trusting the biscuits, but wrong for losing trust in one another, and more importantly, wrong for not being critical of those who give the news.

Along with its metaphorical prowess, EARTHA proves to be a fun read because of how well the dialogue is written. The conversations between characters will flow naturally, using pedestrian diction, while expressing complex thoughts that challenge you. Some characters will feel familiar, Old Lloyd for example, a crotchety old man with a silver tongue, while feeling unique in their own way. I myself felt as though some characters were from my family arguing and laughing over something mundane. It has a very human quality to it; it feels very natural.

Another reason I’m so avid for people to read EARTHA is that it has such a unique style. Malkasian’s art is easy to visually digest, as seen in her other works — such as TEMPERANCE and PERCY GLOOM — and is easy to engage with. Her landscapes are soft to the eye and seem ever-expanding; the soft color palette is smooth and seems akin to the work of Georges Seurat. Even scenes that show ample space between the foreground and background have certain characters or elements detailed explicitly to draw your focus to them. There’s always something intriguing on the page; it’s a talent that’s seldom seen and deserves recognition.

In addition, Malkasian’s character designs are impeccably inclusive. There’s a body type for every shape and size, showing that Malkasian isn’t afraid to portray the human form in all its variations. Every one of them looks so animated and vibrant, and she achieves this without making certain features hyperbolic. It shows an honest depiction of people that some aren’t favorable of. People are old, large, and not always attractive. It’s this honesty that reminds me that people are fragile and have basic desires.  This shows when Malkasian reveals the dreams that manifest. Each one is personal, giving way to secrets, memories, and goals. It shows the unbridled ego, with all its flaws, that we all have and that it’s better to confront them, rather than cast them aside. 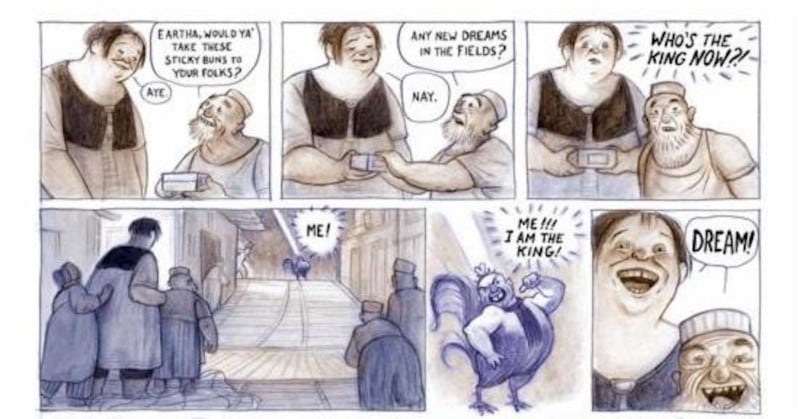 As a whole, EARTHA is a fantastic spectacle from this year that I wholeheartedly suggest anyone read. It’s culturally relevant, enchanting, and fun.