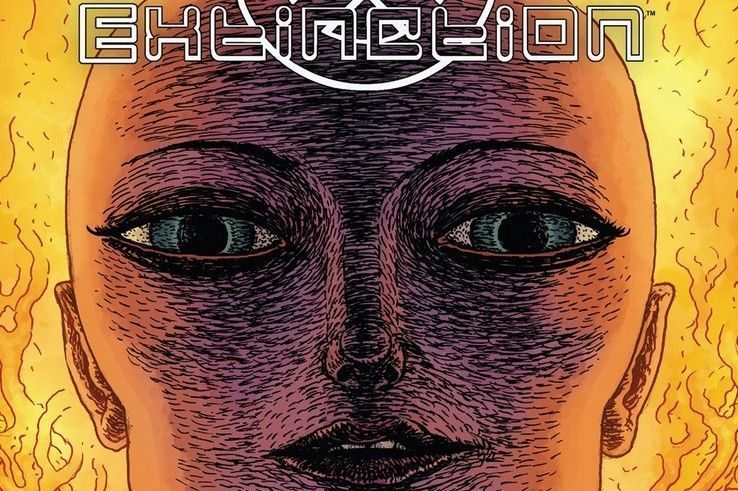 In this final issue of E IS FOR EXTINCTION, Cassandra Nova is in control of the Phoenix… and there is few the X-Men can still do to stop her!

E IS FOR EXTINCTION #4 by Chris Burnham, Dennis Culver and Ramon Villalobos!

After battling Magneto’s Special Class team of New X-Men as well as an army of alternate Beasts brought upon them by Sublime, the aged X-Men Cyclops, Wolverine and Emma Frost, as well as the mind of Charles Xavier in Quentin Quire’s body face their most powerful opponent to date: Cassandra Nova has taken control of the Phoenix, and she intends to end everything Xavier’s dream ever stood for. After a short flashback sequence that brings us back to how Xavier killed both himself, Cassandra and Jean and their battle within the Phoenix egg, we delve right into the X-Men’s attempts at getting Jean back in control of her own body, which, of course, fail horribly. But in the end, one of Xavier’s students comes up with a plan to stop Cassandra once and for all…

I’ve already commented on Ramon Villalobos’ art in my previous reviews, and I still think the artist was a fairly good choice for this title, but something very interesting about this book is the black/white imagery as a metaphor for the battle between Charles Xavier and Cassandra Nova. The black and white fetuses. The black and white speech bubbles. The black and white birds. These two mutants, in this story, stand for good and evil, light and dark. And, in a way, they keep each other in a balance (grey, ironically). For a book this tangled and chaotic with many twists and at least 10 issues of plot in 4 issues, it’s good to see that there’s some kind of framing; this story began with the battle between Charles and Cassandra in #1, and this is what it ends with. Even the couple that visited Hank in #1 is revisited. This framing makes the book feel somewhat complete and purposeful, and it was fun to see how the creators further explored a What-If-scenario book during the flashback scenes.

This issue is also full of allusions to and motifs from the original NEW X-MEN run, which is why it kind of pays respect to that run. On the other hand, the entire book has kind of felt like a parody of sorts: too many absurd plot-twists, utter confusion about what’s going on at all for both the protagonists and the reader, new villains seemingly appearing out of nowhere over and over again… E IS FOR EXTINCTION has definitely been a very over the top book. And even if it was meant to be a parody, which I assume, because it doesn’t really take itself too seriously, the humor gets kind of lost on me as a reader because it tries to make Grant Morrison’s work seem much more absurd than it actually was. And in the process, it becomes something that can barely be taken serious, itself. All of which leads to many problems in this issue.

LISTEN to our podcast about Grant Morrison’s NEW X-MEN!

Character deaths don’t have much impact on the reader because they never really had a chance to develop all that much after all. Events seem rushed or are not taken serious by the reader because there has been too much plot during few issues. Speaking of characters, again, few characters had their chance to shine. (Spoiler!) Beast is being hunted down by people who judge him for not withstanding his the animalistic instincts that have been released and let to the death of their sister. Emma grieving the death of her lover and not having a single reason left to live for. And finally, two lovers being reunited, making the ultimate sacrifice in order to defeat Cassandra once and for all. But again, if we had gotten more time to watch the characters develop, to actually get to know them as people with motifs, it would have made a lot more impact. Again, this is due to the massive amount of plot shoved into this short series.

Another thing I disliked is the fact that the final showdown is very similar to another X-Men comic. Cassandra Nova taking control of Jean Grey’s body and thus having access to the Phoenix powers? It’s been there before in X-MEN: THE END.

Also, I’m not sure if I’m a big fan of how Burnham and Culver decided to have their story end. The total annihilation of everyone involved just makes their entire story seem utterly pointless and redundant. On the other hand, there have been so many allusions throughout the entire series to how many feelings Logan still has for Jean, so the two of them being reunited is kind of a fitting end. And a reborn Phoenix Xorn philosophizing about restored balance has something too. Still, in hindsight, the book just seems like a random collection of pointless conflicts that became redundant not only because the reader doesn’t care about the characters but also because in the end every person involved died anyways.

Nevertheless, E IS FOR EXTINCTION #4 is a solid finale to this book, especially because of the framing and the Charles/Cassandra leitmotif. Still, this series was far from perfect, since it didn’t really work as a parody, but neither as serious book since it lacked impact.