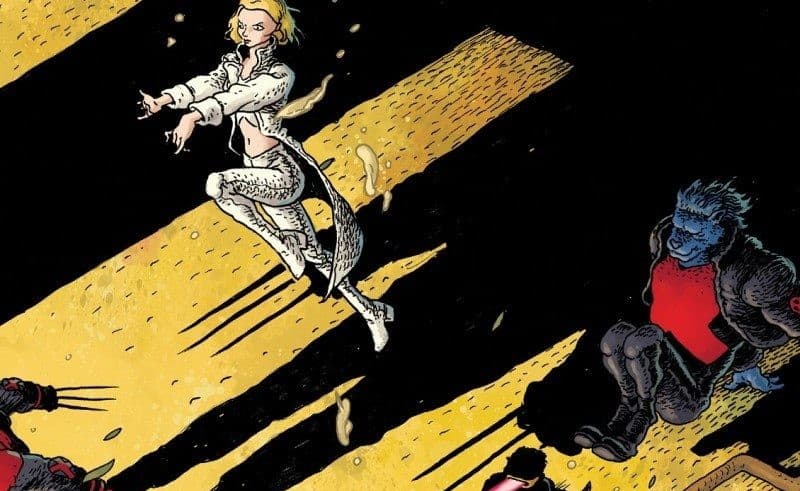 It’s X-Men against X-Men as the de-powered old-timers Scott, Emma and Logan free Xorn and confront Magneto and his new team of mutants in the Atom Institute. All while Beast is finding himself… literally!

E IS FOR EXTINCTION #2 brings us the conflict between the former X-Men Cyclops, Wolverine and Emma and the new team of X-Men led by Magneto at the Atom Institute. In the beginning of the issue, Scott and the others free Xorn from a U-Men facility and immediately confront Erik and Esme in their bedroom. What follows is a huge fight between the two X-teams, a revelation about what Magneto has been planning all along and a confrontation between Magneto and Xorn. At the same time, Beast is dealing with the fact that another version of himself is lying in his apartment… deceased and… human? And, in the end of the book, there’s a huge plot twist that I’m not going to give away!

Just like the first issue, this book has many original ideas that still seem to fit into the tone of the original arc. In this case, several of the characters are being confronted with things that were thematized in the Morrison book: Beast is facing a non-mutant version of himself, hinting at the fact that this character has been dealing with the change of his outer appearance and his progressing… inhumanity. This character suffers from the fact that he’s one of the smartest men alive inside the body of a wild animal. So making him face a human version of himself was a very smart idea of the author. I wonder if we’ll see any dialogue about that particular topic in the next few issues.

Another great idea was to create a stand-off between Magneto and Xorn, a man who, in NEW X-MEN, turned out to be Magneto (which was retconned later, though). During the scene in which they fight over the Phoenix egg, the author manages to illustrate the differences between these two men, once again addressing themes from the original comic and doing something creative within this new plot.

So as for characterization, this is a great book. It has a lot of other cute little character moments in it and definitely pays respect to its protagonists. And the plot is exciting as well. Until there’s a huge cliffhanger/plot twist that just left me completely and utterly confused. Again, I’m not going to give it away, but it’s unforeseeable and totally absurd. And it makes me a little bit concerned about the future of this book. Another thing that felt weird about this issue is that it felt more like the finale to a miniseries than like a #2 out of 5. The huge showdown has already taken place, several characters already died. I’m very uncertain as for what’s to happen in the next three chapters of this story. But we’ll see. Anyhow, generally speaking, this book hits the right tone. As I mentioned back in my review of #1, the art is extremely fitting since it resembles that of Frank Quitely.

All in all, E IS FOR EXTINCTION #2 does the same things the first issue did: it has good characterization, an original plot and fitting art. It has enough ideas on its own and still many elements from the original NEW X-MEN storyline, thus paying respect to it. If only the ending wouldn’t be so confusing and worrisome…