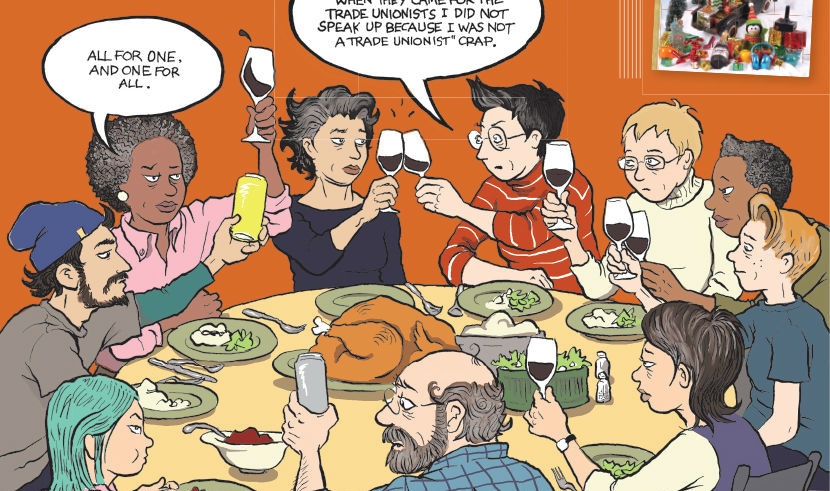 The internet sure is a democratizing medium. People post all kinds of content. If you want to learn how to make a sweater, you google a tutorial. Those who wish to become musicians create their own music and post it online, and those who wish to write start a blog to show the world what they’re made of. Artists and thinkers show the world what they’re made of without the barriers of mainstream gatekeepers. While this is commonplace now, it wasn’t always this way. Before the internet, it was hard to get your ideas across to the masses. This was especially true if most of America agreed that your lifestyle was shameful. Since this month is Pride Month, let’s champion the internet’s assistance in spreading LGBT+ stories with DYKES TO WATCH OUT FOR as a case study.

An (Extremely Brief) History of the LGBT+ Internet

QUEER MILLENIALS ONLINE, an article written by Miranda Rosenblum, explains the positive effect the internet has had on LGBT+ youth by explaining the internet’s ability to connect people to each other. Like the romance between Tom Hanks and Meg Ryan in YOU’VE GOT MAIL, the power of the world wide web to bring people together is unprecedented in human history. Message boards for queer youth show them they are not alone no matter how isolated they might feel. They connect with people who had gone through or were currently experiencing the same situation. This created a sense of community where there might not have been one before the internet. Yet, while the Internet did a lot of good, it also increased people’s ability to bully these same youth. Thus, while the connectivity vastly improved, some aspects of life it hindered others. Still, the positivity of this advancement cannot go unignored. 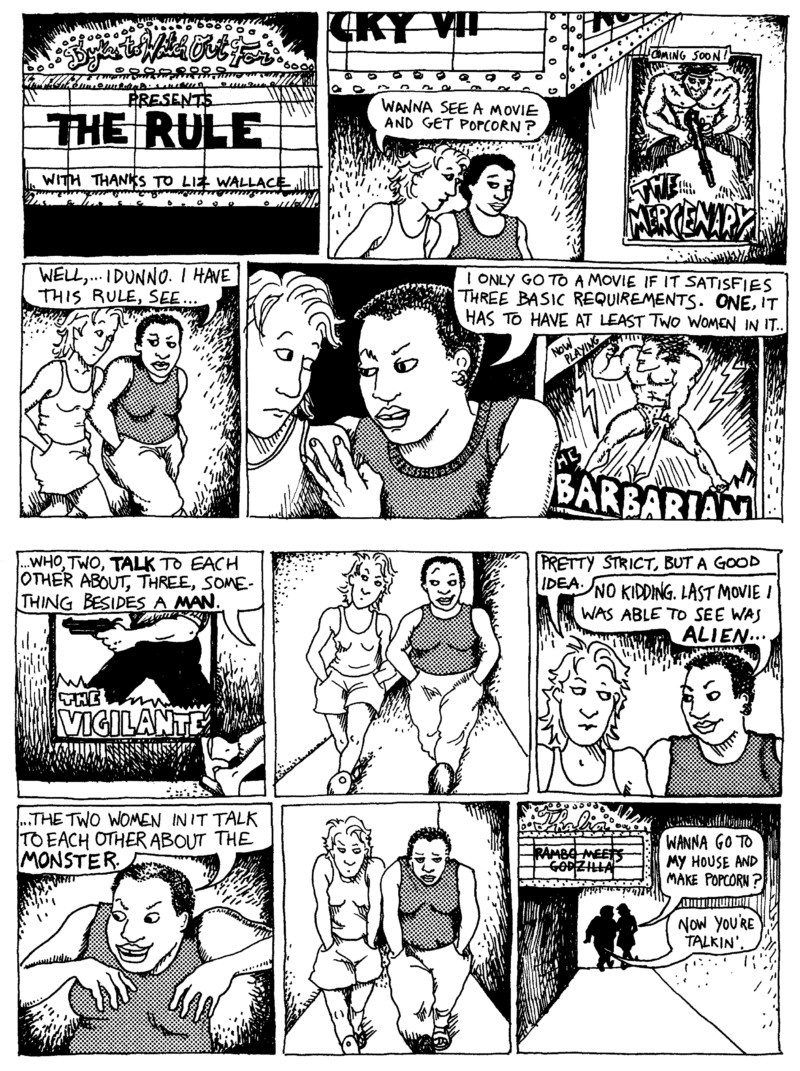 NO STRAIGHT LINES: FOUR DECADES OF QUEER COMICS, edited by Justin Hall, outlines the history of this transformation. The authors of this anthology explain how LGBT+ media grew beyond gay-specific neighborhoods due to the advent of the internet. Fans who might not have had access to queer media in their lives could now simply type an address on their computer and have access to the entire library of a queer creator. Not only that but once publishers began recognizing the need for these kinds of stories, they started responding. Online publishers made room for webcomic creators. This trend parallels the popularity of Alison Bechdel’s DYKES TO WATCH OUT FOR, something that started as newspaper strips but, due to the high demand among readers, was published online and eventually became a mainstay in popular culture.

What is DYKES TO WATCH OUT FOR?

Originally published in Funny Times while also being posted online, DYKES TO WATCH OUT FOR is a soap opera that follows the lives of characters like Mo Testa, Lois MacGiver, and Ginger Jordan to name a few. Think of DYKES TO WATCH OUT FOR as kind of like modern Charles Dickens novels. The stories are linked, like these classic serials, yet the narratives per strip were self-contained enough that one does not need context to comprehend the story. With fairly diverse characters, the strips mainly focused on what it was like to be a lesbian in America during the time it was written.

Each character of them possesses a strong identity of their own. One could argue Mo is most similar to Bechdel herself. Mo works at a bookstore and is a graduate from librarian school, showing an appreciation for literary connectivity. This is similar to the author’s own literary fascination, as seen in her work, FUN HOME, where constant references to reading and appreciation of English scholarship are made. Mo is even drawn in a way similar to how Bechdel depicts herself.

Lois worked at the bookstore with Mo and provides advice for Janis as she struggles with her trans identity. Ginger is a professor at Buffalo Lake State with a fear of commitment. Yet her ability to spar with those who oppose her political beliefs, like the character of Cynthia, is truly admirable. They’re all flawed individuals, but that’s not a bad thing. It’s how they deal with the issues inside themselves that make for these compelling narratives. 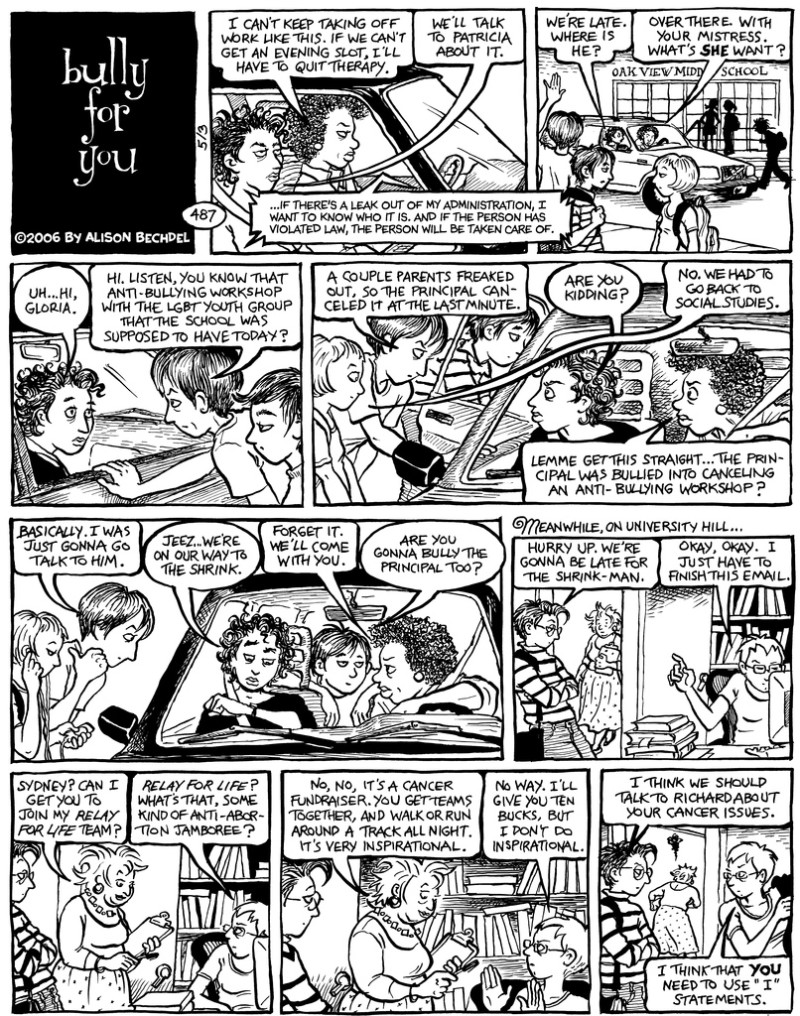 Does This Stuff Actually Happen?

Personally, my favorite story is “Episode 487,” published on May 4th, 2006. Not because it was published on Star Wars Day (though that does help), but because of the story’s similarity to an event I more or less personally experienced. This strip discusses how the middle school where Raffi, the child of Clarice and Toni, attends had parents pressure the principal into canceling an anti-bullying workshop meant to help LGBT+ youth.

READ: But FUN HOME is still an amazing work. Check out why it’s so important to us here at ComicsVerse!

When I was in high school, we didn’t even have an LGBT+ club. A teacher who’d recently come to the school attempted to form such a group yet, from my understanding, either the students or parents stopped that from happening. They eventually made something that was meant to be a general, umbrella club for anyone who felt they needed a place to go, yet specific groups for minority students and queer youth were discouraged. This happened my senior year of high school. While this strip came out years ago, stuff like this still happens under the pretense it doesn’t involve enough people to be important. DYKES TO WATCH OUT FOR more or less reaffirmed that my school wasn’t the only one that sometimes had trouble coming to terms with the changing times. The reassurance was welcomed.

That Comic Before FUN HOME

While this strip might seem insignificant, barely a blip compared to Bechdel’s later work FUN HOME, DYKES TO WATCH OUT FOR spoke to the politics of the time. It pointed out gender inequality and the changing tides of LGBT+ culture. The famous Bechdel Test arose from one of the strips, highlighting media’s treatment of women leads. The strip went out of hiatus briefly on November 23rd, 2016 to comment on the election of Trump. This caused Bechdel’s website to promptly crash due to traffic straining the servers!

Though, let me be clear: this comic is not FUN HOME. While it still reads as quintessentially Bechdel in terms of style and substance, it is a much lighter piece. The best way to describe DYKES TO WATCH OUT FOR is kind of like a GARFIELD comic but gay. That’s what makes them so good. Unlike her autobiographical books, which weave literary references that often boggle the mind, DYKES TO WATCH OUT FOR are smaller and simpler. FUN HOME is a masterpiece, but it’s also been studied to death. The psychoanalytical meaning of the work, how one could adapt it into a Tony-award winning musical — it’s a story that people are now very familiar with. While the relationship between Bechdel and her father is unquestionably relatable, it doesn’t focus as much on navigating queer identities in recent times like DYKES TO WATCH OUT FOR does.

The comic strips tackle many aspects of what it means to be LGBT+ in society. How political views can vary drastically from extremely liberal to painstakingly conservative. It discusses the impact of mental health on people, and how it’s okay to seek therapy when needed. DYKES TO WATCH OUT FOR pokes fun at the political situation of the time of writing. This makes some of the older strips a bit dated, yet reading them years later shows how far we’ve come as a society as well as how far we still have to go.

For those who live in more isolated towns, it feels like you’re all alone. You really don’t know who to talk to when you struggle with finding your sexual identity. The access to books that might guide you through this time often doesn’t find their way to these neighborhoods. That’s why DYKES TO WATCH OUT FOR matters. The diverse characters allow for any reader to connect to at least one character. Maybe someone will recognize themselves in Jezanna Ramsay, suffering from MS yet still holding her own despite this terrible illness. Or maybe Janis, the transgender daughter of Lois MacGiver who is managing her own identity in the world. 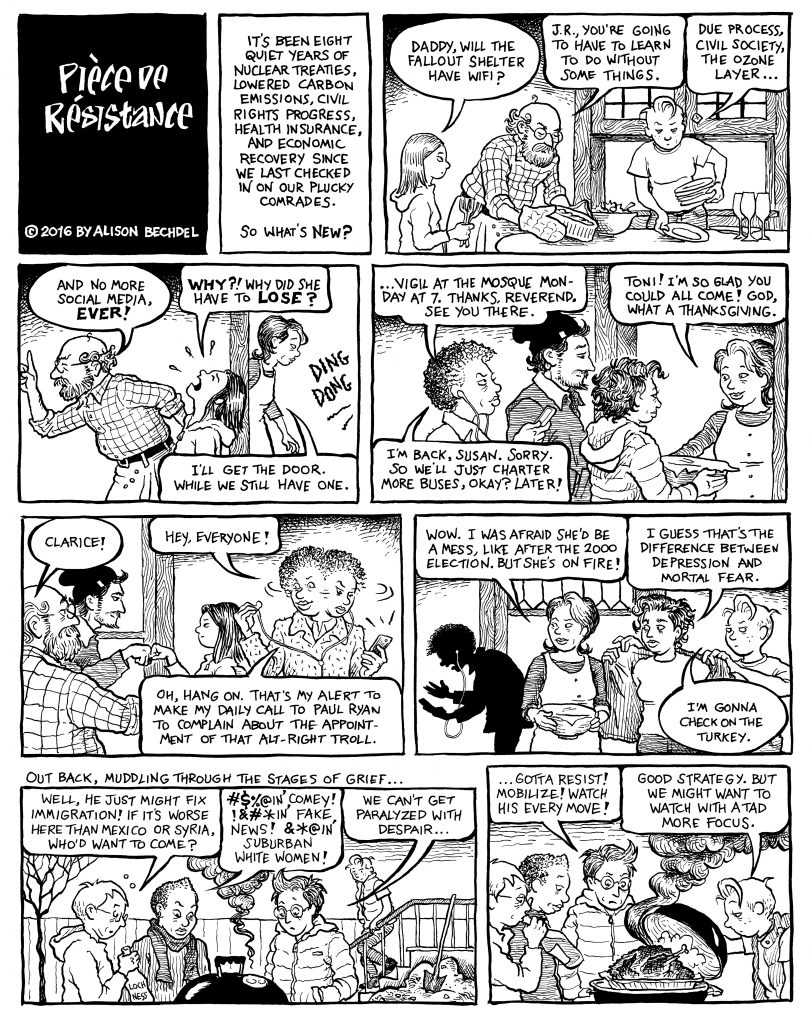 READ: Rearing to read some LGBT+ webcomics? Check out our top-10 must reads here!

When there’s no outlet for someone to explore their sexuality, they turn to media for answers. That’s why it is so important that stories like DYKES TO WATCH OUT FOR are shared. They show those fearful of the future they are not alone. Their feelings are not something to run away from but to embrace. Human characters doing human things and not caricatures of what gay individuals “should be.” Having access to this kind of content makes all the difference. Especially when those around make snarky comments on their misguided perception of queer people. Comics posted online like DYKES TO WATCH OUT FOR show these kids they’re not alone, and they’re going to be okay.