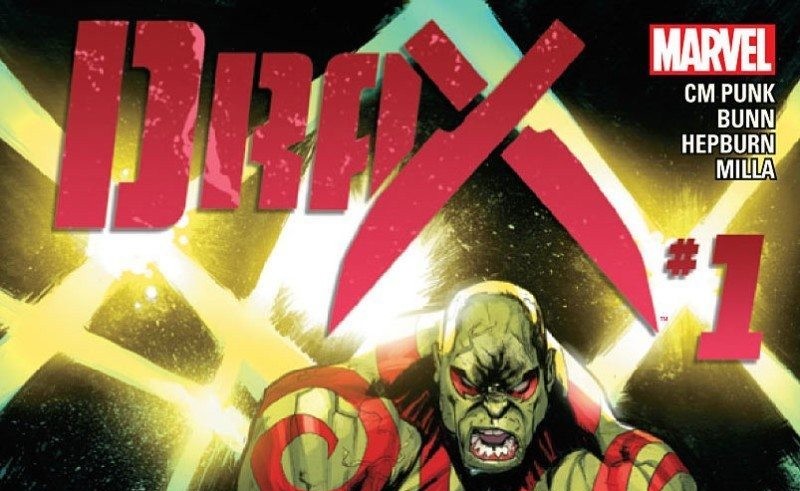 Starring one of the breakout characters from Marvel’s massively successful GUARDIANS OF THE GALAXY film and co-written by a famous celebrity, DRAX #1 has all the makings of crossover success, and the pre-release hype one would expect. Whether the book delivers on said hype or not is another matter entirely.

Since the character of Drax broke out from the GOTG film, it only makes sense that the first issue of his first ever solo series begins with the Guardians engaged in a battle. However the team will only be half familiar to those only familiar with the cinematic version. Drax, Rocket, and Groot are all here, but are joined by the All New, All Different Marvel lineup of Ben “The Thing” Grimm, Venom (Flash Thompson), and Kitty Pryde in the guise of Star Lord. The group is attempting to stop a terrorist cell from detonating a bomb, and is eventually able to do so, thanks to Drax quite literally ripping through several of their adversaries. After the fight is over, the members of the team each go their separate ways, leaving Drax alone. 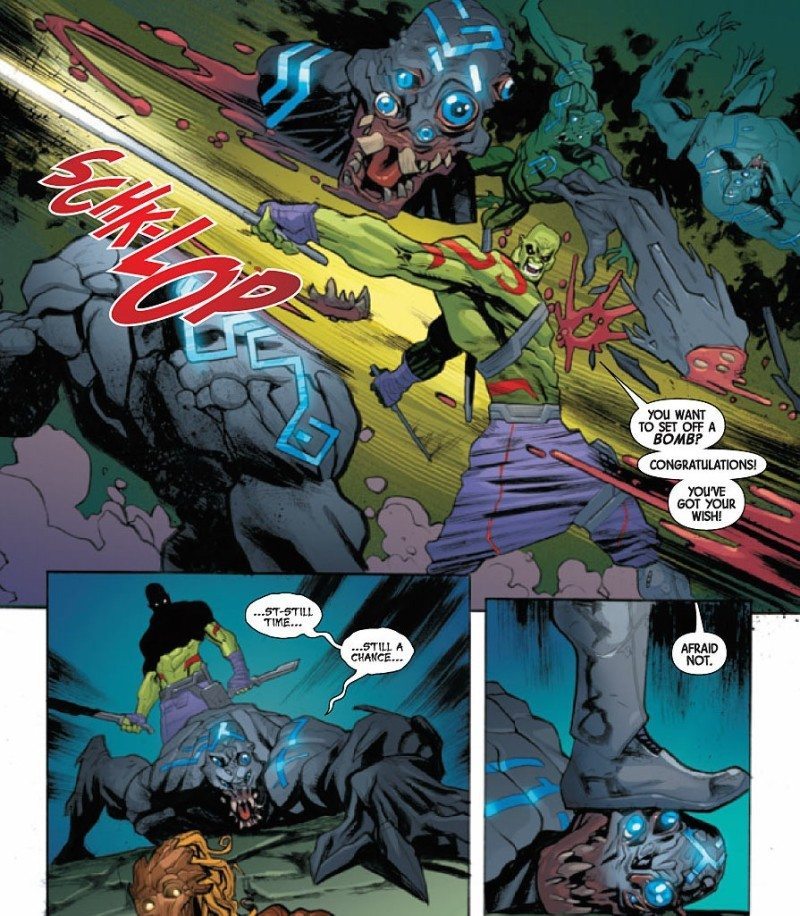 Since he has nowhere else to go, Drax decides to get back to his pursuit of Thanos. Fearing for his friend’s safety, Rocket offers him a ship so that he can at least travel, though the condition of the ship makes one doubt it can even fly at all, let alone safely. Drax sets off on his journey, but quickly become bored when he realizes he has no way to actually find Thanos. He aimlessly flies through space, eventually relishing an encounter with a crew of pirates just so he’ll have something do. Unfortunately for his bloodlust, they decide his ship isn’t worth the trouble of a confrontation.

Eventually, the derelict ship’s systems give out, forcing Drax to crash-land on an unknown desert planet. Since this is a desert planet in a post-STAR WARS world, Drax of course immediately stumbles into a seedy bar. Before he can even find out from the proprietor what planet he’s on, he’s challenged to a fight by a certain cosmic Marvel character that I won’t spoil here. Suffice to say, the cliffhanger sets up a huge brawl for Issue 2.

WATCH: Our review of the GUARDIANS OF THE GALAXY film!

DRAX #1 is pretty much exactly what one would expect from a GOTG solo comic in a post-film world. Co-writers CM Punk (former professional wrestler, future MMA fighter) and Cullen Bunn are very much writing the cinematic Drax (somewhat ironically, Punk’s former in-ring colleague Dave Bautista portrayed the character in that film). The plot follows what those only familiar with the film version would expect, right down to the Guardians cameo and having Drax on a mission to avenge his family by killing Thanos. Structurally, there’s really not much else to the plot of the first issue. It seems to be setting up the series to be a “big fight” book where Drax will encounter and do battle with cosmic Marvel characters, eventually building up to a showdown with Thanos, with this first issue serving as the opening video package building up the fight card. This isn’t to say the book is bad- in fact quite the contrary. I had quite an enjoyable experience reading it, but it’s certainly not a very deep story, at least so far. Instead, the issue reads as very much what it is; a first issue spinning out of a popular group. 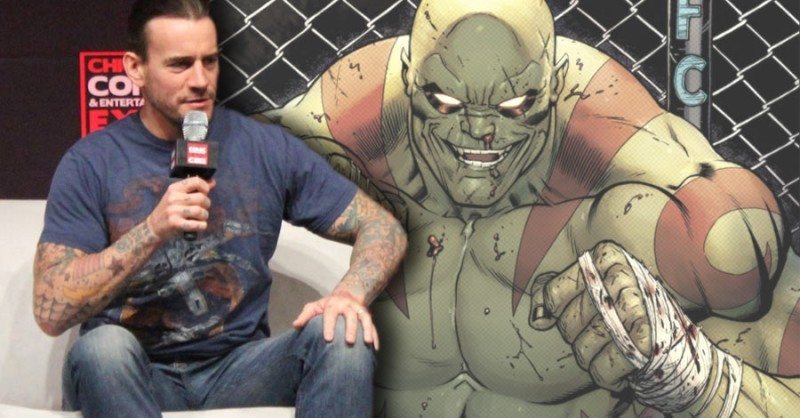 I will say the only thing that slightly disappointed me writing-wise was the lack of Punk’s trademark acerbic wit. He’s well known amongst wrestling fans and Twitter followers as being a genuinely funny guy, and brought those skills to his previous comics writing gigs in Marvel’s THOR ANNUAL and Vertigo’s WEIRD SPORTS STORIES, but they’re largely missing here. I must mention one particular joke that does stand out, namely the other Guardians complaining about The Thing’s incessant use of his “It’s Clobberin’ Time” catchphrase. As big CM Punk fans know, he used the phrase as part of his wrestling gimmick for years. Perhaps as the series continues moments such as that will become more prevalent. 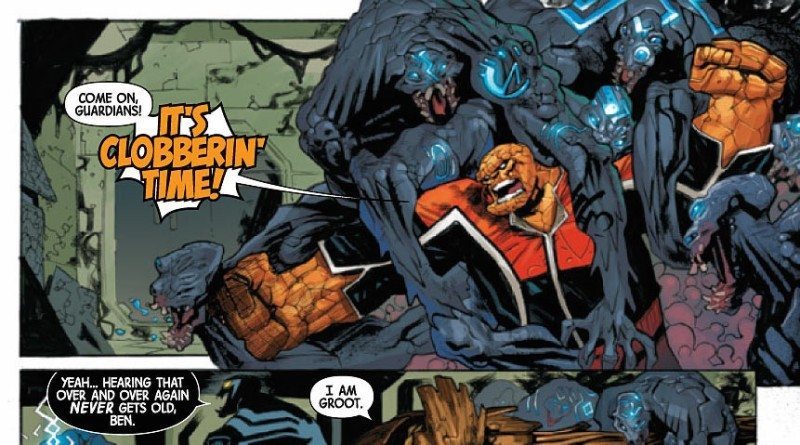 Similarly to the plot structure and story, a great deal of the characterization in this book owes itself to the GOTG film. Drax is presented here much as he is in the film, a literal minded blunt ass-kicker who has no qualms killing his enemies and is driven by a lust for vengeance against Thanos.  Rocket and Groot are also presented pretty much as they are in the film, while the other Guardians are basically ignored, I would think so as to not confuse readers who aren’t familiar with them.

READ: Our review of another solo Guardian series: STAR LORD AND KITTY PRYDE!

As enjoyable as the writing was, the creative MVP award for the book has to go to artist Scott Hepburn. His pencils elevate the material in the best way possible. I especially enjoyed the way he played with Drax’s physical posture, first showing him looking confident and dominant during the Guardians early fight, and contrasting this later by showing him crammed into the cockpit of Rocket’s ship, trying to fight off boredom. 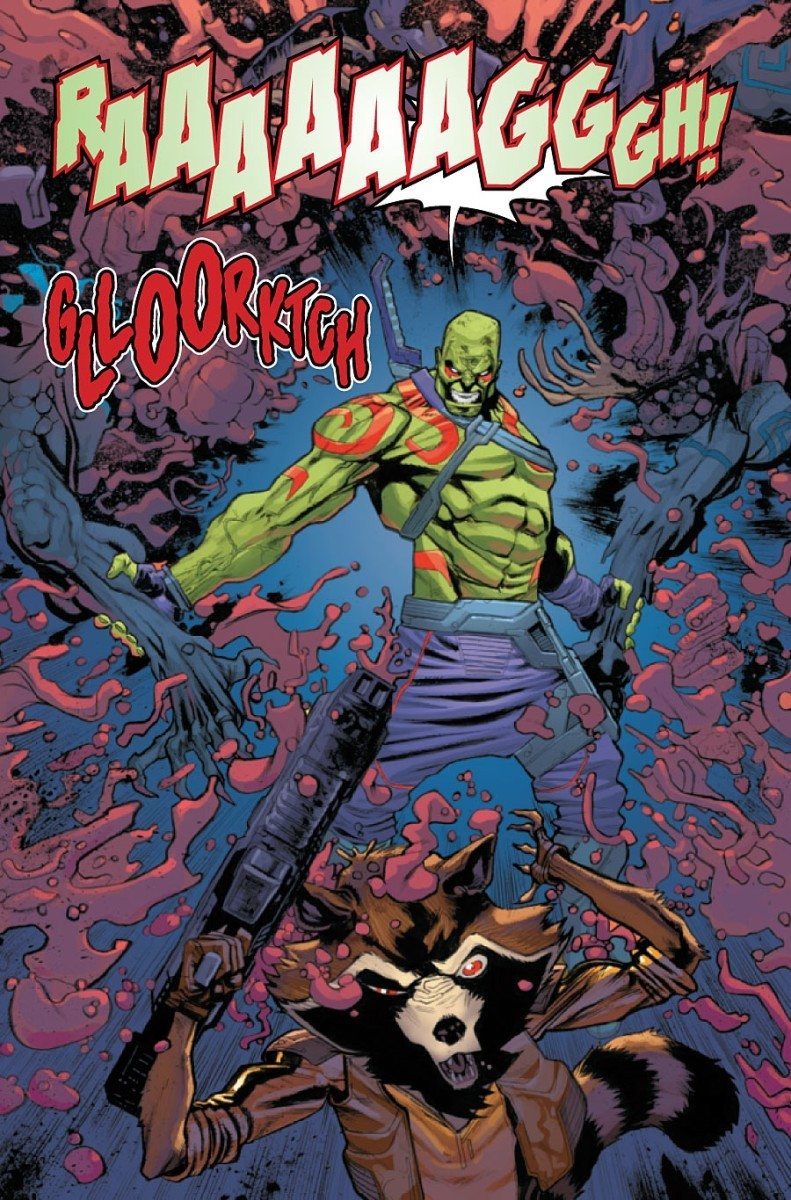 DRAX #1 is a well written beautifully illustrated story, albeit one that feels a bit predictable and light on content. I’d give it a solid recommendation if you’re a big fan of the GOTG film, or simply looking for a fun comic that you don’t have to much thought into.

What did you think of DRAX #1? Let us know in the comments below, or on Twitter @Comicsverse