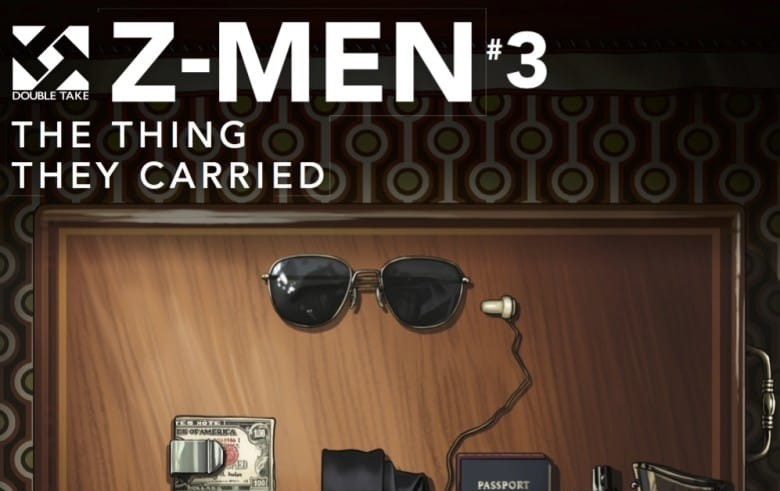 Z-MEN #3: The Things They Carried

It often takes a bit for zombie stories to really hit their stride. Not all narratives with the undead can start with a bang like THE WALKING DEAD, or 28 DAYS LATER. Z-MEN is no different in that the first couple of issues took time to establish the context that all zombpocalypse stories need. After reading this issue, I can finally say the creative team at Double Take finally hit their stride in full zombie-killing fashion.

READ: Did you miss our review of Z-MEN #2? Check it out here!

When last we saw our heroes, they were fighting off a mini zombie horde in a basement. This issue sees them deal with those zombies, while also providing a larger context to the mayhem going on in the rest of the town. The first two issues contained three zombie kills, all headshots. This issue we finally get to see the use of melee weapons, an absolute staple in zombie lore. Clancy and the deputy try to fight their way out of the basement as Stuart is fast asleep in the squad car; though the action isn’t excessive, it’s perforated by humor from the characters, the prime example being Stuart sleeping and drooling while his partner is in mortal danger. 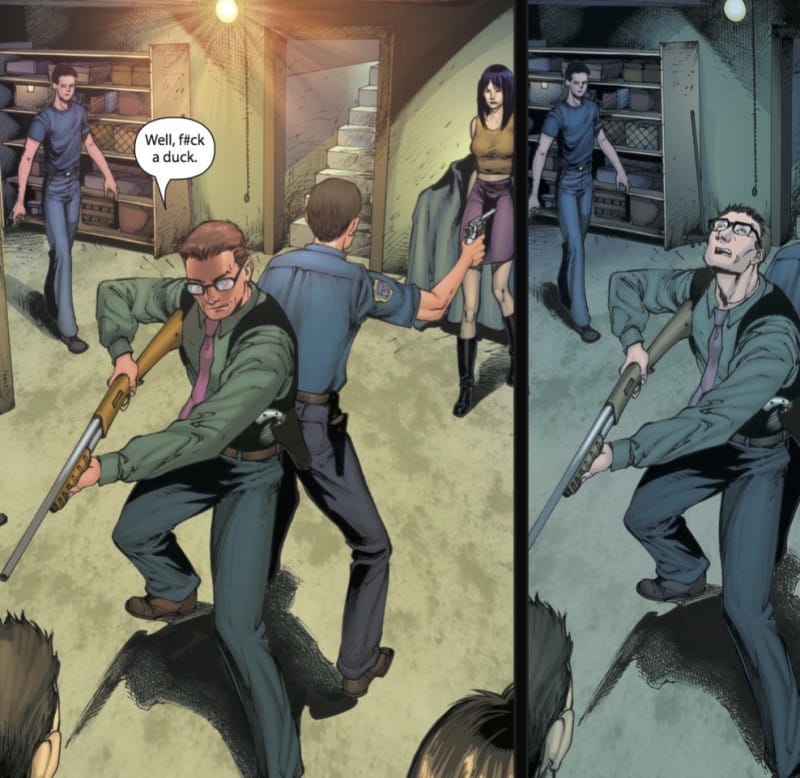 What is interesting to note is how fresh and subtle the humor is in this comic. As we see the action and horror rise through the story, we also see an increase of the sarcastic, dry-wit humor that sets this comic apart from the other many comedy/horror stories that flood the media today.

It’s known that this property is to be adapted into a film in the near future; it will be a good sign if the film can replicate the humor and pacing of this particular issue. This issue also explores the relationship between the two leads more, suggesting that whoever is cast should have great comedic timing and chemistry.

We meet protagonists Stuart and Clancy halfway through the first issue. We don’t know much about them when they’re introduced, and there’s some witty, pop culture-filled banter in issue 2, but the dynamic between the two agents really begins to develop in this issue. The classic buddy cop tropes of a hardened badass and a naive young gun are tried and true. Hopefully this dynamic continues to develop in issues going forward as the duo meet increasingly tough situations. What will be interesting to see is how this duo will distance themselves from, or perhaps continue to play off of, these buddy cop tropes.

The art does a great job of lending to the grounded, even classic, feel of the comic. Being set in the 60’s, the art’s extravagance might feel out of place, but Kurt Tiede’s drawings definitely compliment the story while failing to distract from the characters and plot. Readers might want more visual stimuli in this comic, but the blood and gore is sure to increase in the coming issues. Z-MEN issue #3 is a great escalation of this story and proves that when it comes to Double Take, the best is yet to come.