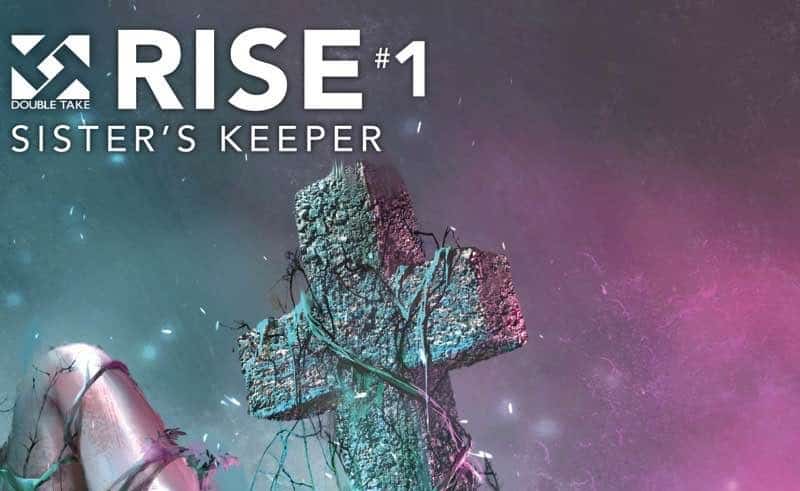 Once again, I delve into a new title released by new publisher ‘Double Take’ who are created an entire set of comics based in the Night of the Living Dead Universe. It’s an interesting idea, like I said before and while I kind of wish they were doing their own shared zombieverse, tethering your books to an existing property is going to always be a safer bet for a new publisher.

Getting immediately to the elephant in the room, when I previously reviewed the publishers other books ‘Zmen’ and ‘Slab’ I spoke quite a bit about the quality (or lack thereof) in the lettering. After the reviews were released, Double Take got in touch with me on Twitter and assured me that there will be more traditional lettering in the print versions.

To see my previous reviews on DOUBLE TAKE, click here!

While this is fantastic to hear, at the risk of beating a dead horse, I still find it puzzling that the lower quality lettering (which again is a problem in this book RISE 1: SISTERS KEEPER) is in a digital version of the book. My previous experience of digital material has been exactly what you get with a print quality; I don’t know if the different lettering is a good idea in the free digital issues, especially when the whole design is to get people to buy your book.

That aside, I actually really liked RISE apart from a few minor quibbles, which I’ll expand on as we go. The cover is again, a work of beauty and immediately grabs my attention. Like I said before, judging books by their covers is something that comic fans will do, especially when it comes to new books. In terms of that, Double Take has nothing to worry about. When I was choosing which book to review next, I felt intrigued by several covers, but this particular one really drew me in.

To learn all about DOUBLE TAKE, check out our press release on the company!

I also like that unlike SLAB, the main character of the book is featured on the cover. I felt the lack of this in SLAB hurt my enjoyment of the book but here, it is definitely not the case.

The interior art in RISE is again a high quality like the other books I reviewed. The quality of the line work and the colors are very high for a company that is brand new. Startup comic companies are lucky to get one or two artists that are very strong, but so far, of the books of theirs I’ve read, Double Take has a seriously talented art team.

The writing on this title was also by far the strongest of the three I’ve read. There was great atmosphere built, likeable characters introduced and some interesting mysteries introduced that I want to see expanded. In the case of the writers Michael Coast and Jeff McComsey, perhaps two heads are better than one? I really like the main brother/sister duo and am very interested in some of the interesting question marks raised by the formers apparent fate and subsequent implications that may have I would like to see explored more.

To check out another DOUBLE TAKE book, take a loot at DEDICATION

There is some quibbles, none of which are a big deal but there are a certainly a few eyebrow-raising moments. The stats at the start of the book are a bit out of place (although I’m sure they serve some sort of long term purpose), the political scene in the middle interrupts the flow of the story that I was caring about, and I could have done without it. I also can’t finish the review without mentioning the utterly ridiculous method the siblings use to get away. I won’t spoil it here but it is really, really ridiculous and took away some of the goodwill that the book had earned.

However, despite all this, RISE is a decent enough book and definitely the best of the trio of Double Take’s offerings I’ve been given to read to date. If the majority of their books are like this, and they can crease out the few wrinkles I mentioned, I could see a very strong line coming out from them.

We also have this review for yet another DOUBLE TAKE book, SOUL right here!