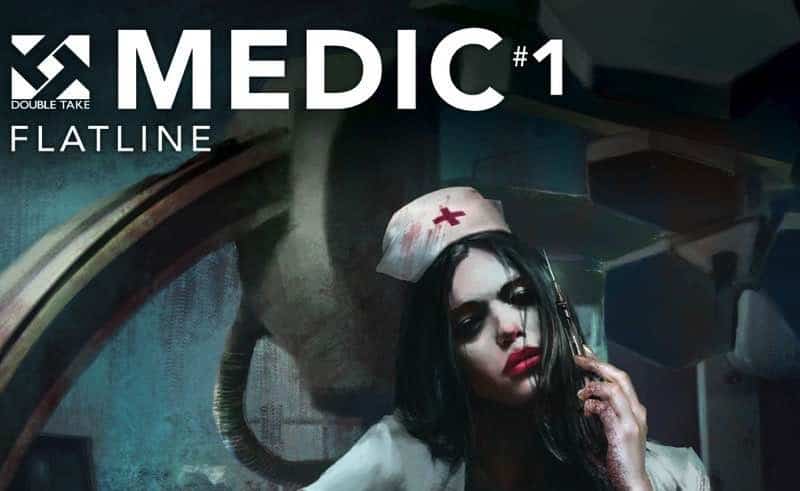 Double Take has taken a most ambitious step in introducing itself through a whole new universe. I’m not sure if any up-and-coming comic publishing companies can boast such a thing! They’re presenting ten different, unique story lines that all intertwine, so all comic book fans’ interests should be piqued. I had the great chance of reviewing the first issues of MEDIC and HONOR as separate story lines, which allowed me to see how well Double Take’s Comic Universe is set up and how the stories overlap.

I started with MEDIC: FLATLINE, and the characterizations are immediately communicated in the first couple of pages. The tension in the hospital from three injured and nameless individuals being rushed in was apparent from the start. From the get-go, there’s a lot of information to be taken in. There are multiple storylines that present themselves at once, such as the man on the news, the injured patients (a couple and a snarky man with a severed toe), and eventually the anecdote that the practicing doctor, Dr. Bricker, tells while preforming surgery. If there’s anything lacking about the story, it’s certainly not the characters. A good story is nothing without the characters. 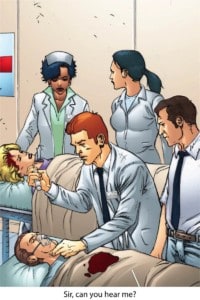 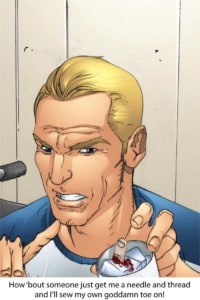 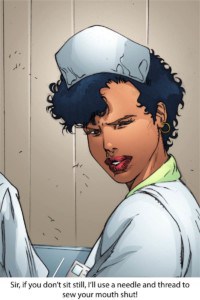 That being said, due to the diversity of the characters, it is difficult to pinpoint which character to identify with or follow through the story. The panel organization could definitely allow for more of a variance in visual communication, in addition to having the story follow the couple into the hospital, or maybe the nurse. 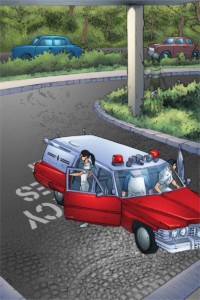 In addition, I feel like while the visual urgency is apparent in the injured being driven to the hospital, the scene where they’re being rushed inside could do with some sound effects to round out the whole sensory experience. Though I will say, the subtle addition of a ghost in the background is a nice touch…what does it all mean? We’ll have to find out!

One character we get to relate to strongly is Dr. Bricker. He introduces himself to us in the comic as “a very late bloomer when it came to girls” after being referred to as “one of the best surgeons in the state.” Dr. Bricker continues his surgery while telling this anecdote about how he was unpopular in school and how he finally had a chance at love.  He tells this tale while trying to save this nameless man’s life who’s suffering from severe chest injuries. The tension and suspense in this scene is memorable. This scene also capitalized on different angles and perspectives. It’s arguably the strongest part of the story for MEDIC’s first issue! That is, aside from the interesting cliffhanger. Their withholding of information left me with many questions, such as: “Who was the injured couple?”, “How was the cranky man with a severed toe involved?”, and “What is the Venus Probe?” These are all strong questions to leave the issue with. Hopefully the second issue will grace us with a bit more information about how all these separate threads are connected.

That being said, HONOR: PROTECT. SERVE. BEAT. BURN. is much more of a joy to read. It opens with a dialogue between the police officer and chief on a day when they do a standard traffic speed limit monitoring. While doing so, they are talking about the police officer’s memory of something that happened for the first time at the age of ten. What exactly this is is not revealed until the end of the story. This is a great story thread to have throughout the comic, giving the reader a home base to return to while events take place for this pair of cops. We also get great insight into the police officer’s past concerning her experiences with growing up and with her family. The only question I want answered is what to call this interesting woman. I have all the necessary information about her character except for her name. 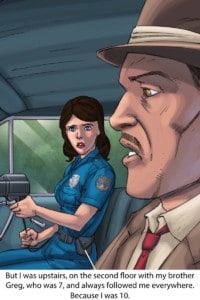 Despite this, I’m comfortable following her as the main character of the comic. The two pull over a couple from out of state for a speeding violation, having let many others pass with much higher speeds. As Chief McClelland of Evans County PD talks to the confused New York driver, it becomes clear in their dialogue that the Chief is not necessarily the most honest police officer, claiming the driver was going faster than he was.  McClelland is gunning for the out-of-state drivers’ wallets. This causes a chain reaction of unfortunate events, all beautifully strung together by the female police officer’s personal narrative.  This leads to Old Fred, an old friend of Chief McClelland, speeding on his country tractor in attempts to break the speed record. 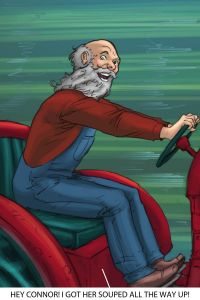 Meanwhile, the couple are distracted by their flirtations with road sex, which cause the husband to kick the stick brake. There is a certain dread for what is to come next! At the risk of spoiling anything, let me summarize in saying that this issue ends similarly to MEDIC. There’s certainly an overarching phenomenon going on in Evans County, Pennsylvania. Double Take has taken up to the formidable task of presenting these events from the perspective of various people of different careers, each forming one piece to an overall puzzle of the universe. 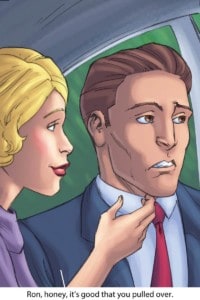 In short, I found HONOR a bit more compelling in its storytelling because of the way that the female police officer’s personal narrative held together and propelled the main stories- the New York couple being pulled over and Old Fred on his speeding tractor. This issue did a better job of creating a sense of dread and suspense. In addition, I can’t help but wonder if perhaps this couple is the same one being wheeled in from a mysterious and unspoken injuries in MEDIC. That alone is an interesting connection to make between the issues, making Double Take’s ambitious first step a truly interesting one.

I think it should be acknowledged that while I was introduced to Double Take’s work in analog form, it actually seems to live and breathe the most effectively on the web. The motions and the subtleties in the changes between the panels are more impactful when moving through the reader they provide on their website. It’s also apparent that they had to cut some transitional scenes for the benefit of telling the story in analog form in the most effective way. It’s definitely worth reading both the analog as well as the web format for Double Take comics. For those of you who aren’t used to reading things in a storyboard or narrative video game format, Double Take’s comics may take some warming up to.

I did find myself wanting more commitment to the horror genre in the art, and I hope that in the future we’ll get to see some art that reflects the weight of what has come upon Evans County. It would be great, too, if the interior art remained cohesive with Apple Qingyang Zhang’s fantastic cover art. I felt that I desperately wanted more from the interior artwork. The story is all there, I just felt that I wanted more heart and soul in the artwork, something more compelling. If the story and artwork become more fleshed out, this great idea could reach its highest potential. That, with a greater commitment to a single character to follow through each story, could greatly improve the flow of a great story and characterizations that all exist. Double Take still has a great amount of room to work in for revealing more information about the universe they set up in Evans County. The skeleton is there. Now it’s time to see the body.

Double Take has graciously launched all the comic issues on their website www.doubletakeuniverse.com, and you’ll get to feed your analog fix when they release all ten individual issues as well as a great Super-Pack that includes all ten issues together, on Wednesday, September 16th. Look out for Double Take’s big entrance in a comic book store near you. If you like new thing and innovations, you’ll check them out!