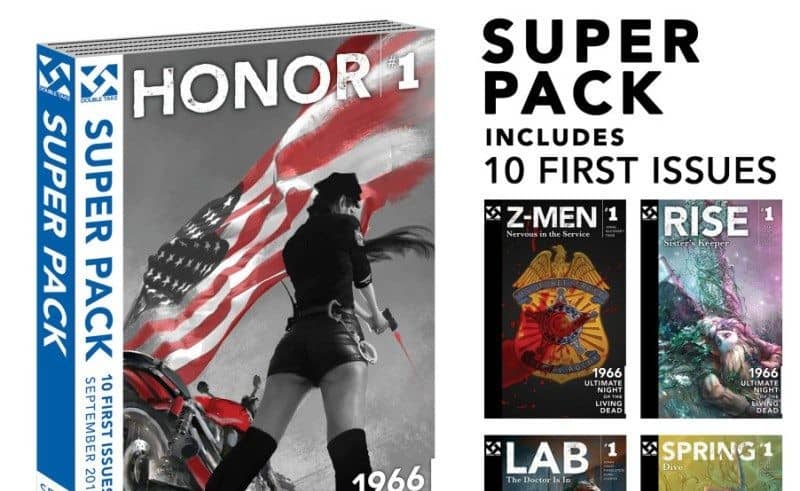 It’s hard to get anyone to try something new in any industry. By nature, humans are more comfortable with the familiar, what they’re used to. This is why in film today we get so many movies that are either adaptions, reboots, or sequels. We know these movies, they’re not going to hold any surprises, we know pretty much what we’re going to get for our money.

With comic books, I think it is largely the same. We know Batman, Spider-Man, and The Avengers, so people will buy them. They know what they’re getting. A new property is something of a risk. What if I don’t like it? Maybe I should just wait for the trade? I think we all ask ourselves these questions without even realizing it.

I’ve worked on the smallest of small end of comics for nearly 6 years now. I know what it’s like to try and get people to pay you attention. It’s not easy and so when the opportunity arrived to review two new offerings from new publisher, Double Take, I leapt at it. I’m going to talk about two of their new books, SLAB and ZMEN, which both take place in a shared universe that stems from the original Night Of The Living Dead.

READ: Like Zombies? Check out the review of SECRET WARS: MARVEL ZOMBIES here!

Well- we have something familiar, which gives them a slight advantage, and we have them dealing with zombies who are having a bit of a ‘moment,’ so let’s see how we get on.

I want to mention before I get started something very important, you can read both of these comics I’m about to read for FREE on the company’s website at: http://doubletakeuniverse.com. With the increasing price of print comics from most companies, its hard to resist at least trying out a comic if its FREE so if you seem intriqued by this review then you can check them out. I’ll be keeping story details to a minimum and looking at both of the books more from an overall technical aspect.

I’m reading SLAB first because I really like the cover. It reminds me of my own indie books Sparks by prominently featuring a female character and seems to indicate some sort of crime/medical drama feel. It draws my attention anyway and in comics where people really do just the book by its cover that is really important.

LISTEN: What’s SPARKS? Find out here in our podcast with author, Glenn Matchett!

What immediately catches my attention on the title page is that while I don’t recognize a lot of these names, one certaintly sticks out in the form of Bill Jemas. Back in the early part of the millennium, Jemas and Joe Quesada were pretty much responsible for bringing Marvel back from the brink and turned the company around. Jemas was a huge part of the launch of the Ultimate universe and is even credited as co-plotter on the first arc of Ultimate Spider-Man. He was the publisher of the company during one of their renaissance of sorts but lost his pivotal role due to some controversy revolving around the brilliant Mark Waid/Mike Weiringo Fantastic Four run. That being said, he was a major part of Marvel’s revitalisation so his involvement in this company certainly grabs my interest.

First of all, art wise, the book is lovely to look at. The quality of the art and colouring is really high I’d say. There is some really good knowledge here on how to put a panel together and the characters and scenes are crystal clear. If I finish a comic and I think ‘I want to work with this art team,’ then I take that as a good thing.

The writing itself is a bit more uneven. I’m not sure if in the print page that there is a page explaining what ‘universe’ this comic takes place in but the digital copy never makes it clear. I know there’s some sort of zombie outbreak but people seem to largely be taking it in their stride, rather than treating it as a major threat.

None of the characters come across as appealing and I didn’t care about any of them in the slightest. These things of course can take time with a new book, but if you’re going to have any level of threat, you need to build characters that people will care about. I was also really, really disappointed that the character on the cover never makes an appearance. I wanted to know who she was, what her story was, and there’s no sign of her. There’s nothing that drives me more crazy in comics these days than covers that either give away a main point in a book or don’t tell you what the story is. I think the cover is great and a lot of people will pick it up on that alone, but they’ll not find anything in the comic that the cover indicates. I’m also puzzled by the choice of the title of the book. It indicates something medically orientated but it seems to revolve around some kind of television show.

CLICK: For a comic that does exactly what it promises on the cover, check out our review of BOMBSHELLS 1 from DC!

The final thing that jumps out at me over and over is the lettering. To be completely frank, the lettering is the worst part of the book. Having worked in comics, I know how important lettering is to a story, and I will freely admit having comics out there where the lettering is also poor, which bothers me. The lettering drags the overall quality of the book down, and its a real shame because I can think of at least 4 letterers who are exceptional at their job who would KILL for an opportunity to do a book like this and make it look 100 times better- Wes Locher, Matt Krotzer, Alena Lane, and Greg Gorman are a few names that come to mind. They’ll improve the quality of the book by tenfold.

The whole thing reads as a poor B-movie horror movie from 20 years ago and perhaps, considering the universe it is in, that is the point. Still, I’m not sure how many people that type of comic will appeal to in the current market.

Moving on to ZMEN, which again has an interesting cover which grabs your attention. The bloodied police badge gives you an impression of what kind of book you’re about to read so let’s see if this time, that is the case.

Again, art wise, I have only the highest of compliments towards this book. It’s clear that the company has managed to get some top notch artists involved and that is something incredibly important for a small press book. I am completely unfamiliar with Kurt Tiede, who did the art, but again I finished it thinking ‘I want to work with this guy’. Like SLAB, the art is high quality and something I could see in any book by a much larger company so kudos to Double Take in that regards.

I’m also puzzled by the title of the book. It almost makes you think you’re reading a new X-Men title. Perhaps the reason behind the title will become self apparent in future issues? If I had to choose one to continue reading, it would definitely be ZMEN, but based solely on these first issues, I’m honestly not sold on either.

Oh and yes, the poor lettering is back again. Seriously, I’ve put together over 20 comics in my time in the industry, working on no budget, and starting out with barely any experience, and I never made books with lettering this bad. If Double Take wants to be taken seriously, this is an area that they absolutely need to nail down.

I wanted to like both of these, I really did. Having my own books that I want more people to read, I wanted to sing the praises of both of these books. Is there potential here? Definitely, but I think there needs to be some serious rethinking done and I’d say/hope that Bill Jemas is a smart enough man to realize that. They certainly have the art down, the writing can be improved over time, and I think I’ve said enough about the lettering.  The thing is there are some fantastic books out there, and not just from Marvel and DC.  There’s fantastic indie books like Nailbiter, Copperhead, The Chair, and Metaphase that are completely worth your time and money, and maybe some of Double Take’s other series will be of higher quality, but these first issues haven’t pulled me in.