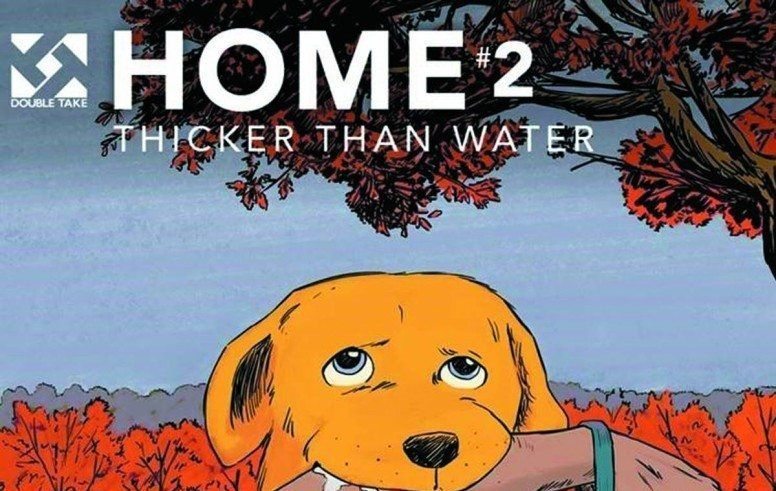 HOME #1 was an interesting title in the Double Take launch.  With zombies that didn’t seem like your typical zombie, a young daughter whose knowledge seemed a little too mature and intricate, and a lack of action, it was definitely not everyone’s cup of tea.

However, if issue #2 is any indicator, you’re going to want to stick with this title, because things are about to get really interesting.

READ: Learn about Double Take’s Z-MEN, soon to be a movie from Lionsgate!

The cover, again, feels disconnected to the contents of the book itself, but the covers sort of set the mood for the story. It’s actually beneficial to not get too much detail on the story within, so that you can enter with a clean slate.

Before we get to the issue itself, there’s also a humorous one-panel comic in the front of each Double Take issue.  It’s a quick little zombie-related joke, usually irrelevant to the rest of the book, but it’s fun nonetheless.

The issue is still very expository.  What starts as an issue focusing on the bite from the end of issue #1 quickly becomes a story focusing on the teenage kids back home.  There’s another character introduced, and we get to learn more about the teenagers.  We jump back to the parents and younger kids for a minute, but only very briefly, to check in on the development of the bite.  The important action in this book is in seeing the way the zombie outbreak has spread.  That is, this is the most important action until the big reveal at the end.

We won’t spoil anything, but look carefully in the background.  If that’s what we think it is, then a lot of questions are about to be answered.

Honestly, the last panel of the second issue is what has us the most excited about this title.  The younger daughter, whose crass attitude and grown-up knowledge is reminiscent of Louise from BOB’S BURGERS still didn’t play off very naturally, but it looks like we’ll find out exactly why this is pretty soon.  In fact, this stands to be a complete game-changer.

Art-wise, things feel a bit better than the first issue.  Comparing the art to the attempt in issue one, it seems like the shading is a bit softer and more natural in this sophomore issue.  There are some interesting angles being used (one of my favorite is a full page of the youngest daughter with a little wisdom about teenagers and sex).

Overall, the issue itself still feels expository, but fans of THE WALKING DEAD should be more than used to set-up issues.  What I’m most excited for is what’s coming up- the more you look in the background of these books, the more you find, and I can’t wait to find more!