After six years DOOM PATROL is back with their own book! It’s the iconic book of DC’s YOUNG ANIMAL imprint, which is curated by MY CHEMICAL ROMANCE frontman and THE UMBRELLA ACADEMY creator, Gerard Way. YOUNG ANIMAL is currently pushing out new, revamped, and reimagined titles like SHADE THE CHANGING GIRL (based on the VERTIGO series SHADE THE CHANGING MAN) and MOTHER PANIC, new to the DCU. Finally, readers are now being treated to tripped out psychedelia in comics turned up to eleven.

Gerard Way and Nick Derington are the ones creating the madness of the series by taking bits and pieces of DOOM PATROL history and smashing them all together. The team has crafted a sizzling new world of fresh imagery to add to the already bizarreness of the Doom Patrol. This was the first of a new breath of cosmic, neon punk air that the YOUNG ANIMAL imprint has been pushing out. Several old characters are back, some for the first time in print in over twenty years. On top of all the classic characters, this generation’s Doom Patrol has a few new names added to the roster.

History of the Doom Patrol

DOOM PATROL has a deep history in the DCU, beginning way back in MY GREATEST ADVENTURE #80 in 1963. The series was renamed THE DOOM PATROL on issue #86. A mysterious man brought them together to face impossible adventures. Their cruel and fantastic circumstances are why they were chosen for these missions. These outcasts left feeling sorry for themselves finally had a purpose of fighting and saving the lives that no other hero could.

Although the Doom Patrol consists of the heroes that no one really wishes they could be, they take on the villains and insanities that teams like the Justice League can’t handle. The most favored and best run came from Grant Morrison in 1989. Here, Morrison took hold of these bizarre characters and amplified them tenfold. He introduced new ideas like Da-Daism, the Scissor Men, and characters like Danny the Street and Flex Mentallo.

READ: Learn more about the future of YOUNG ANIMAL in our interview with SHADE THE CHANGING GIRL artist Marley Zarcone! 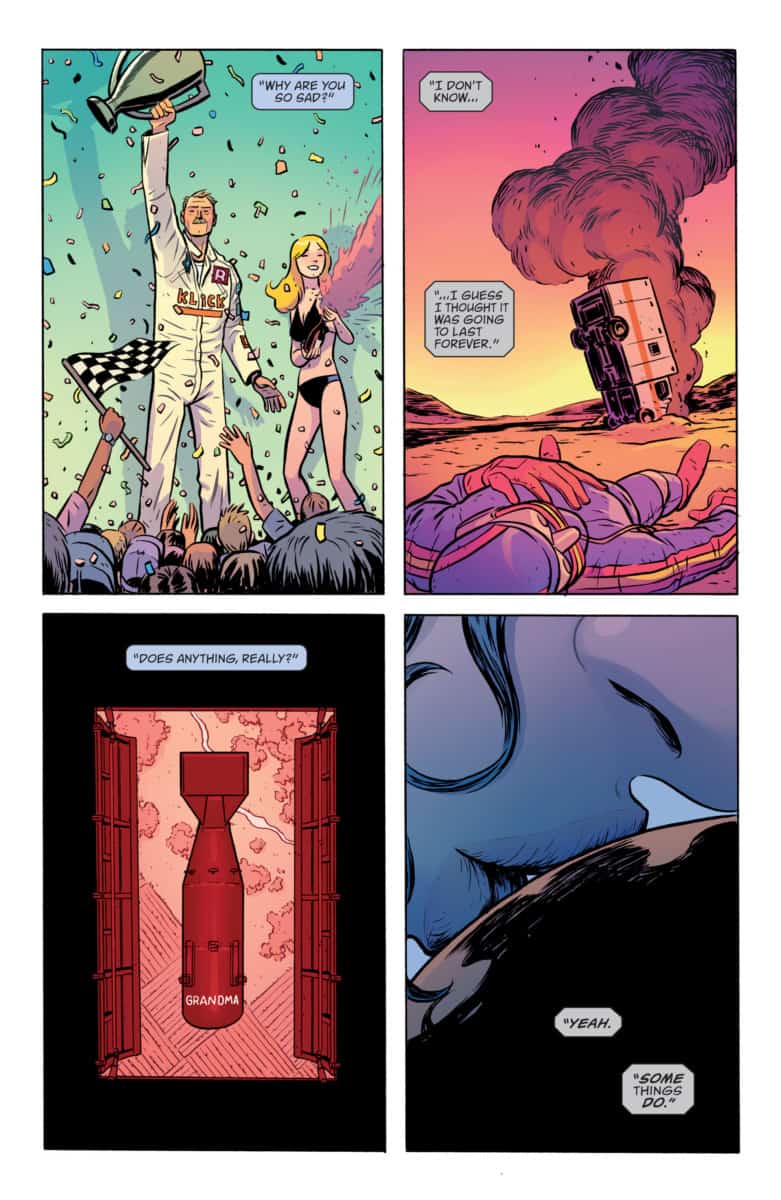 Overall, Morrison had a romantic influence in his storytelling that involved a complex adult reading style, which was barely emerging at the time. Morrison applied this style and warped the Doom Patrol characters to make them go out of their mind, literally. At the beginning of Morrison’s run, Cliff Steel, who’s brain was put inside a robot after a deadly car accident, checked himself into an insane asylum due to the trauma of having a human mind in an emotionless metal body. Here Cliff met Crazy Jane, a girl who had 64 different personalities and could switch to someone new in an instant.

Crawling From The Wreckage

The new series brings back all the bizarre characters, along with several fresh names. Introducing Casey Brinkie and Sam, the best ambulance driver and paramedic in Midway City. The devotion to their jobs shows us that they’re heartfelt and they care about others. Another new character is the tap dancing Terry None, who enters the story as a singing telegram for Casey. The question between good and evil is brought up as the panels suddenly zoom into a tossed away gyro on the street, unveiling a microscopic universe within, and an advanced civilization holding a beloved Doom Patrol member: Robotman, Cliff Steele.

READ: Thirsty for more trippy? Take a look at our review of CAVE CARSON HAS A CYBERNETIC EYE!

Cliff is the only member of the Doom Patrol to appear in every incarnation of the team. Niles Caulder, (AKA the Chief) is known for saving Cliff’s brain after his accident. The Chief serves as the leader of the team. Although he might not have powers, the wheelchair-ridden man has a genius intellect. His appearances in the new book are a single page that hasn’t made much sense yet.

Also, another familiar face returns: Larry Trainor (AKA Negative Man) who was a test pilot for the US Air Force. Larry was exposed to a high amount of radiation, giving him the power to release a radioactive negative entity from his body known as the Negative Spirit. For the first time, Negative Man’s entity takes a trip to the Negative Space. It’s a new concept that seems to be similar to the Green Lantern Corps. In the Negative Space, Larry faces N’hal the Negative Entity where he becomes examined, judged, and put to purpose by it. So far, an interesting new twist to this classic character.

Lost, But Not Forgotten

Another legendary character making a comeback is Danny, who’s still a brick from previous continuity. Danny first appeared in Grant Morrison’s run on DOOM PATROL as Danny the Street, a sentient road that can travel at will to any place without affecting the surroundings. Being a literal street, Danny can allow people he picks up, usually the outcasts and the strange, to live within him. In his previous incarnation in 2011, he was destroyed with only bits and pieces of himself remaining. Danny used the last remaining energy he had and pushed his consciousness into a single brick. The flamboyant Danny also brought other characters onto the scene, like the “Hero of the Beach” — Flex Mentallo. Way picks up Danny as a brick and reincarnates him as the sentient street. The mystery of what happened to Danny post-2011 begins to unravel.

Flex, the muscle man of mystery, debuted in DOOM PATROL #35 created by Grant Morrison. Besides Morrison’s run, Flex has only otherwise appeared in a four-issue self-titled series. Flex has only made small appearances so far, but as a fan favorite his future seems promising.

Crazy Jane is another character that’s long overdue for a reappearance. She was one of the most bizarre of Morrison’s DOOM PATROL creations. The result of the alien Dominator’s “gene bomb” caused each of her 64 personalities to develop different super powers. Gerard took Jane’s past and continues to build upon it by bringing back Jane’s Underground, an inner subway station within her consciousness that leads to each of her different personas. It will be interesting to see how her future plays out. 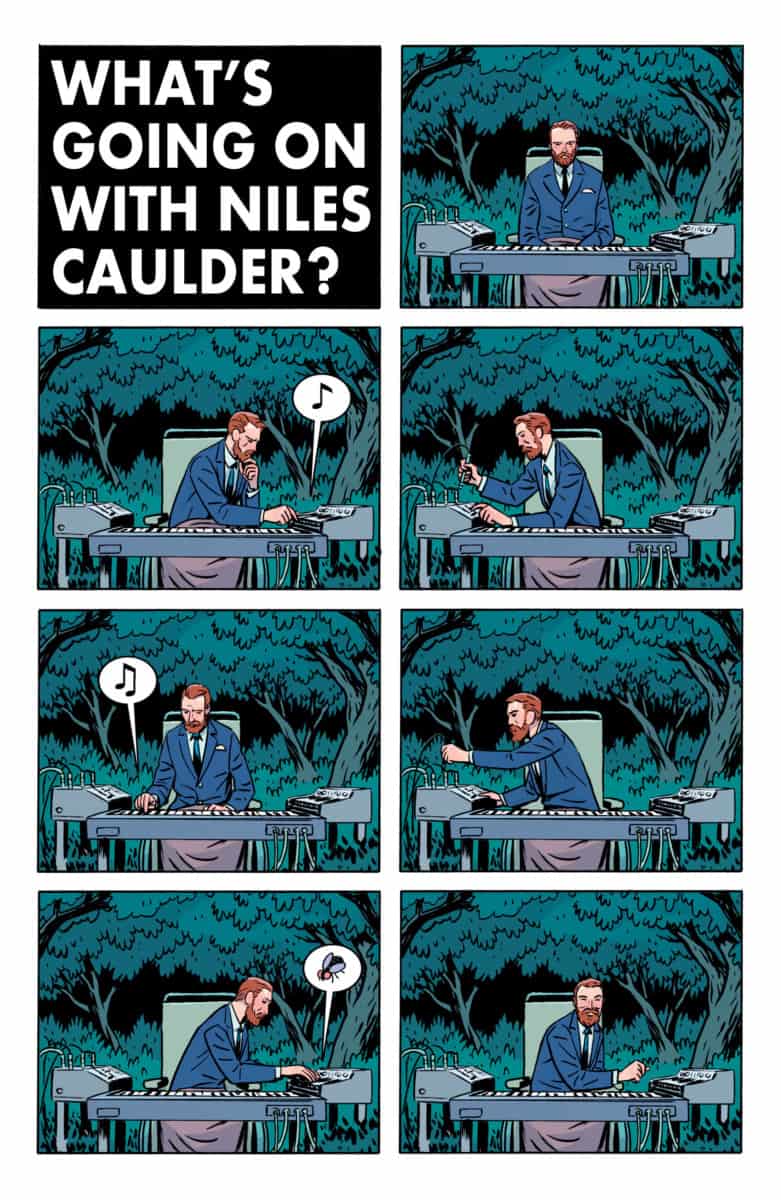 Overall, Gerard Way’s poetic and at times cryptic writing style shows how heavily influential Grant Morrison’s run was. So far, while taking the entire history into consideration, Way has found a means of allowing new readers to grasp the large world easily. Way is also curating the entire YOUNG ANIMAL imprint, which is a heavy load of work with five ongoing series. Nick Derington has done the pencils and colors for all of vol. 1 so far. Altogether, his work shines bright and gives a friendly new look to the title. Derington is definitely making his own definitive style of art.

Together Way and Derington have set the tone for not only this book but for the whole YOUNG ANIMAL imprint. While volume one collects issues 1-6, readers can grab issue #7 in stores now. With a new story arc out and announcements for a crossover coming soon, it’s a great time to catch up. There’s still more to come from these strange heroes, so keep an eye out for the next arc!