Ready to get weird? If not, DOOM PATROL #1 might not be the book for you. DOOM PATROL #1 is the inaugural release of DC’s new imprint, Young Animal, curated by the frontman of late emo titan My Chemical Romance and Eisner Award-winning king of misfit comics, Gerard Way. In addition to being behind the creative direction of Young Animal, Way will also be penning three of the four comics, including DOOM PATROL.

It is fairly difficult to ascertain the length of time that passes between the twenty-four pages of narrative contained within DOOM PATROL #1. While it is clear that SOMETHING has transpired, it is similarly difficult to decipher WHAT that something actually is. DOOM PATROL #1’s primary purpose (shared with the overwhelming majority of #1s) seems to be laying the groundwork for subsequent issues in the series. A sizable portion of the book is spent introducing readers to a handful of different characters, both old and new, each their own facet of the gem that is DOOM PATROL.

However, the meat of the story is presented to the reader through the eyes of Casey Brinke, who possesses the ability to drive in a wildly dangerous fashion without crashing. This certainly comes in handy in her work as an EMT, behind the wheel of an ambulance. The story only departs from Casey’s point of view to give the reader brief windows into the lives of other characters, which serve to lessen the slack in the loose ties as the issue moves forward, and will presumably continue to do so as DOOM PATROL progresses. In DOOM PATROL #1, readers see Casey Brinke put her EMT skills to the test by attempting to reconstruct the body of Robotman with the help of her new roommate, a freelance singing telegram. 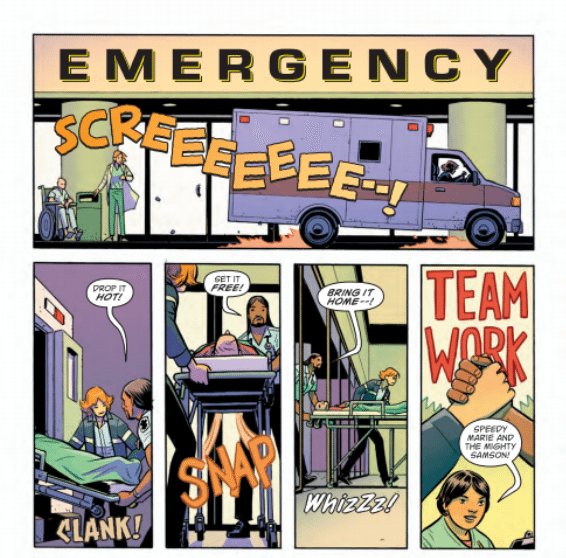 For those who’ve read THE UMBRELLA ACADEMY or THE TRUE LIVES OF THE FABULOUS KILLJOYS, it will come as no surprise that Way’s dialogue in DOOM PATROL #1 manages to solidify each character’s vernacular and unique pattern of speech, side-stepping the comfortable trap of similarity. That being said, DOOM PATROL #1 gets away with lacking a general narrative direction because it is the first issue of the title, but if this persists, then Way’s DOOM PATROL will best be read in a collected format, instead of in twenty-four-page chunks. Through frequent hopping between characters and seemingly non-sequitur panels, any doubts one might have regarding Way’s command over metaphor and symbolism are dispelled. For instance, Way uses the severed head of Cliff Steele (Robotman) as a nod to both Ridley Scott’s ALIEN and Shakespeare’s Hamlet. Additionally, flies make multiple appearances in DOOM PATROL #1. Do they appear as a metaphor for rot and decay, or possibly a larger plot point to be revisited later on in the series? Only time will tell.

READ: DOOM PATROL is a reboot, so what? Check out our defense of reinterpreted superheroes!

Pairing Way with artist Nick Derington and colorist Tamra Bonvillain is what truly turns DOOM PATROL into a retro epic for the modern age. Visually, DOOM PATROL #1 is equal parts acid trip, cave painting, Saturday morning cartoon, and kaleidoscope. Derington and Bonvillain tackle a wide variety of environments and styles; from an apparent microverse (in sepia – rendered in pencils) to celestial realms, and back to a two bedroom apartment littered with bits of freshly-exploded roommate. Between Derington’s clean lines and Bonvillain’s vibrant colors, even the smallest details are crisp and eye-catching. 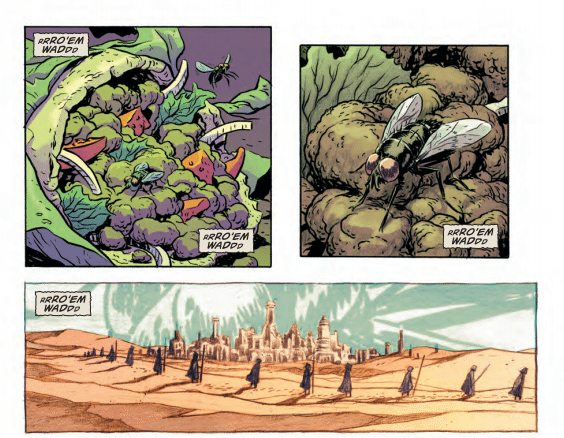 DOOM PATROL is certainly not your average cape comic. For those of you who might be a little dissatisfied with any perceived monotony in the world of superhero books, DOOM PATROL might be just the thing for you. DOOM PATROL #1 has proven to be a refreshing breath of air lacking in neither action nor characterization. It’s going to be wacky, it’s going to be dark, and it’s certainly going to be different.