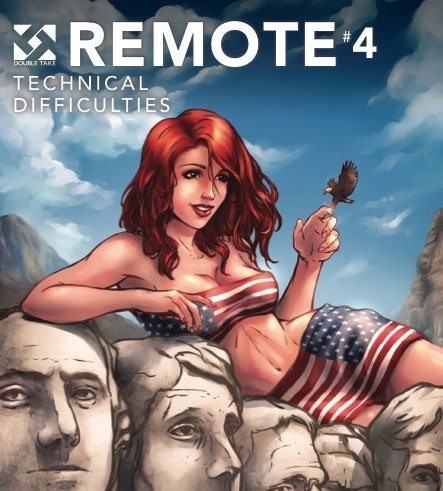 If you’ve been following the comic industry for the last year or so, then you’ve undoubtedly heard of Double Take, the young publishing company owned by Take Two games. While only 4 issues deep, Double Take has taken THE NIGHT OF THE LIVING DEAD and run in an entirely new direction. Those of you who are expecting more zombie action may be disappointed because what you get is not your typical run-of-the-mill zombie story. Most titles don’t focus too heavily on the zombies, instead focusing on the survivors. As you’ll discover in the other titles in Double Take’s Genesis IV super pack, trying to juggle the different character groups and their dynamics is no easy task. Who holds the power, and what does power mean in this post-NIGHT OF THE LIVING DEAD world? We’ll explore this through the events of REMOTE #4!

READ: Wait, the zombies are us? Catch up on Issue 3 of REMOTE with this review!

The issue starts off with one of the most powerful characters we know. He’s powerful enough that he’s managed to escape the zombie apocalypse and is getting high, both literally and metaphorically, in South America. He’s managing his information network and making money like the rise of the dead hasn’t even occurred.  While an interesting character, I’m wondering when he’s going to really begin to do something of consequence.  So far, he’s just been living extravagantly and telling a story about ice skating. 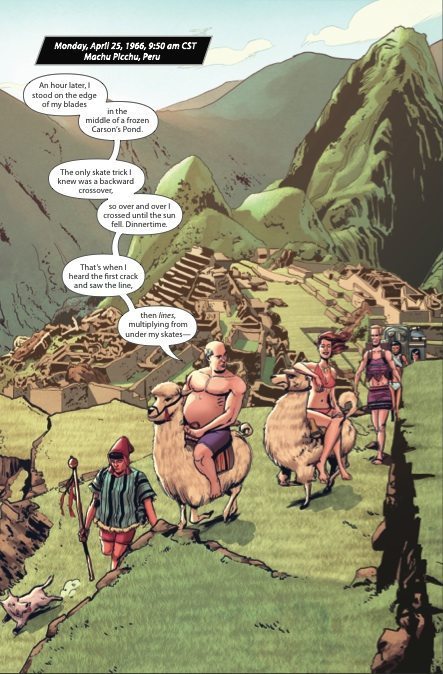 Meanwhile, Samantha Stanton, radio DJ extraordinaire, has been marathoning through the weekend, never going off the air. Those of you who have read our previous reviews or have been reading since issue 1 will recall that Samantha was kissed by a zombie in that first issue. You’ll also remember that she’s been able to maintain a sort of control over the zombies. This is our first example in the series of Samantha’s power manifesting. Her personality shifted a bit too, becoming much more rebellious and confident as time has gone on. She used to be meek and conservatively dressed; now she’s saying “pussy” on the air and dressing provocatively. Some may have mistaken this for inconsistent characterization, but if the Genesis IV super pack did anything, it answered a lot of questions.

Here’s the quickest explanation: human scientists experimented with a bacteria, which can infect a host and reanimate dead tissue. These bacteria survive in colonies called “torques,” which are large enough to be detected as worms. These worms can be spread via skin-to-skin contact, but if they are on the skin, they will not infect the host until the host is deceased. If the host is alive and the torque enters the body via the transmission of bodily fluids (the zombie that kissed Samantha, for example), then the living host can be taken over by the torque. At this point, the living host retains intelligence, can control the zombies, and usually gains additional super powers.

CLICK: Our review of Z-MEN #4, soon to be on the big screens!

Since Samantha has absorbed the torque while still living, we have an explanation for her changing personality. We now understand why she can control the zombies. It’s an interesting dynamic; she almost seems to feel sorry for the torques that are stuck inside the bodies of the zombies. Since the torques are a species that survives best in colonies, it makes me wonder if Double Take might explore trying to help these torques reestablish intelligence or remove them from the dead bodies into new, living hosts. 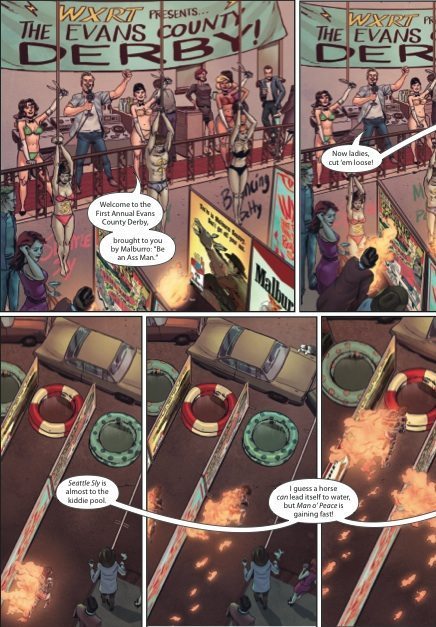 This type of power stems from ability. Samantha is able to think, to use fine motor skills, and to communicate with ease. As time goes on, according to the survival of the fittest, the torques that have found themselves within a living body should thrive. The dead ones, lacking any skill, will likely die off.  They can’t blend into normal society; they serve little function. They’re treated like animals by the torques and the humans. Those that aren’t shot on sight are used in twisted games like the derby pictured above, or they’re used as slaves, as Samantha has been prone to do.

Another type of power that we see manifesting itself in this issue is political in nature. Ed Grubler, who owns Samantha’s station, is establishing himself as a media mogul. As the owner of the only radio stations still in operation, he essentially has a monopoly on communication and media. If you control the flow of information to the general public, then you could theoretically control them. Unfortunately, Samantha’s rebelliousness attracts the wrath of several old-fashioned religious folks nearby who form a mob. Religion can be a powerful thing, too. 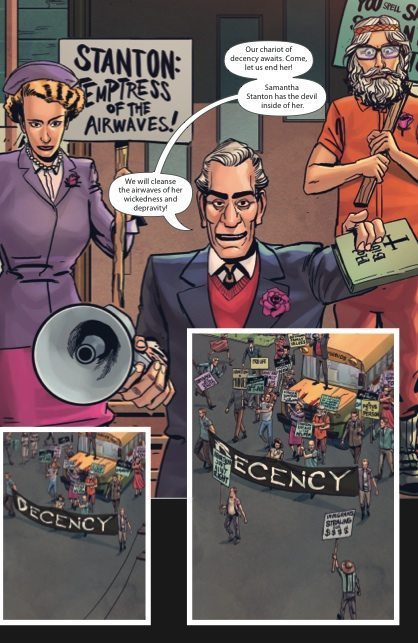 The last type of power we see is Samantha’s first usage of something that has been teased on every cover of this series, so I don’t feel that it’s necessarily a spoiler, but if you haven’t read the book yet, look away. The final pages reveal Samantha’s ability to increase her size to that of a giant. This is the most obvious form of power we’ve seen in the series so far, and it’s the kind of thing that is going to quite obviously change things moving forward. How the power dynamics of this world continue to develop in this REMOTE corner is yet to be seen, but it’s one ride that I’m quite curious about.

The art is a huge improvement for the series as a whole. Comparing this issue to issue 1 is like comparing apples and oranges. This is cleaner, crisper, and just all-around better. The establishing shots of Machu Picchu are breathtaking, but the issue also has plenty of action to match the caliber of the art.  From explosions to trippy hallucinations, Heller Young has stepped the quality of the art up a notch or two.

READ: For more Double Take action, check out our review of SPRING #4!

As a whole, this is a huge step forward for this series. REMOTE is blowing up. If you’re a fan of Samantha Stanton, you can’t miss this issue. We finally get some answers to questions that have been building, and the ending is so satisfying. It’ll definitely bring you back for issue 5.