Over the years, Disney has published quite a few mini-series. From superheroes to wizards, Disney has never been afraid to put their classic characters into parallel worlds. Until now, I have enjoyed their tales from different Disney universes, however this newest incarnation seems to be more of a hodgepodge of random, popular folklore floating through space. DONALD QUEST #1 is about Donald Duck and Mickey Mouses’s attempt to stop the evil Meteormaster, who is trying to take over the floating lands of Feudarnia. This new story by Pat McGreal & Stefano Ambrosia promises everything from encountering pirates and vikings to steampunk technology. Putting these popular trends into a story is smart, but unfortunately doesn’t make it more engaging for the reader.

Andrea Freccero’s character design for this series is well done. Having the ability to recreate these classic Disney character is an art form on its own. Freccero has truly mastered the ability to portray our beloved Disney favorites in comic book format. My main grievance is with a majority of the panels’ backgrounds. The environments look very bland and uninspired. Even the night sky in the first page looks like it has a moon that was photoshopped in at the last minute. When the world of your story is based around the idea of galaxies and space travel, attention to detail with those panels should be of the utmost importance. I hate to say it, but the “wonder” seems to have fallen through the cracks in this issue. 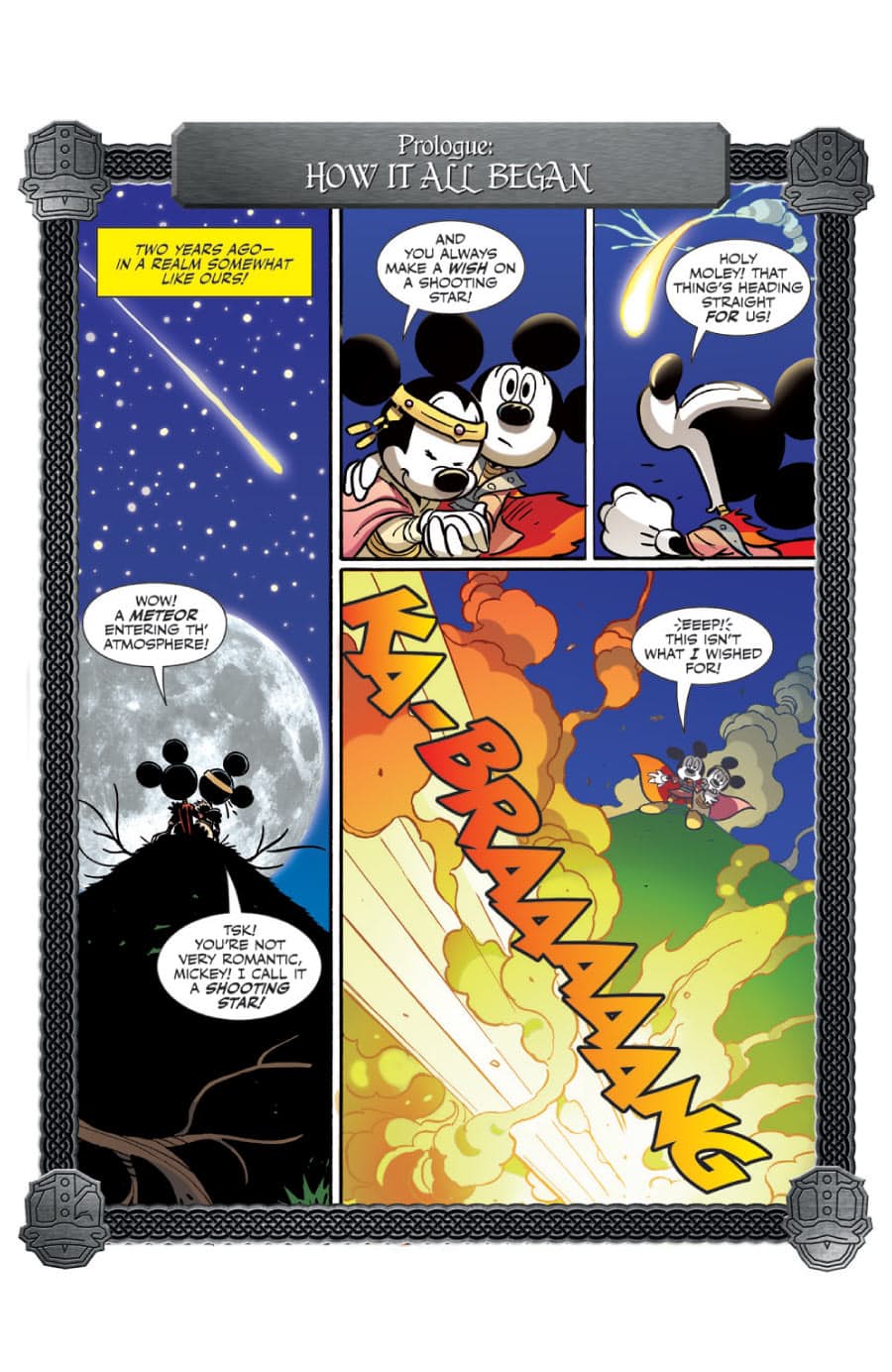 As for the setting, I think it’s too scientifically inaccurate for me to not take notice. It is hard to get over the fact that these two islands are literally floating in the middle of outer space. How is it they survive without some kind of shield, enchantment, or atmosphere when all they seem to have is wood? Its’s easy to say kids reading this won’t think about that, but, when I was eleven, I questioned Jimmy Neutron not needing a space helmet every time I watched the movie. The lack of attention to detail really took me out of the plot of DONALD QUEST #1. Freccero shows me steam viking robots and floating ships but no steam emanating from these inventions. Nothing to lift these giant ships up. The nuances are small, but can really take a reader out of the story.

DONALD QUEST #1 includes very well written characters to an extent. The writers have captured their original essence so well that it’s boring. Seeing as this was a different universe, it could have been a bit more alien from their original incarnations. In the story, Donald seems to have some rivalry with Mickey, nothing really that original there. Scrooge and the triplets are just viking versions of their DUCKTALES counterparts. To say it plainly, these are the characters we know and love in fun costumes. Ambrosia & McGreal write these characters well, but they definitely didn’t take any risks. When venturing to a parallel world, many readers crave the “What if?”. This is the rare chance to mix it up and completely alter fan favorite characters. These comics should be an opportunity to stir the pot that is classic Disney. 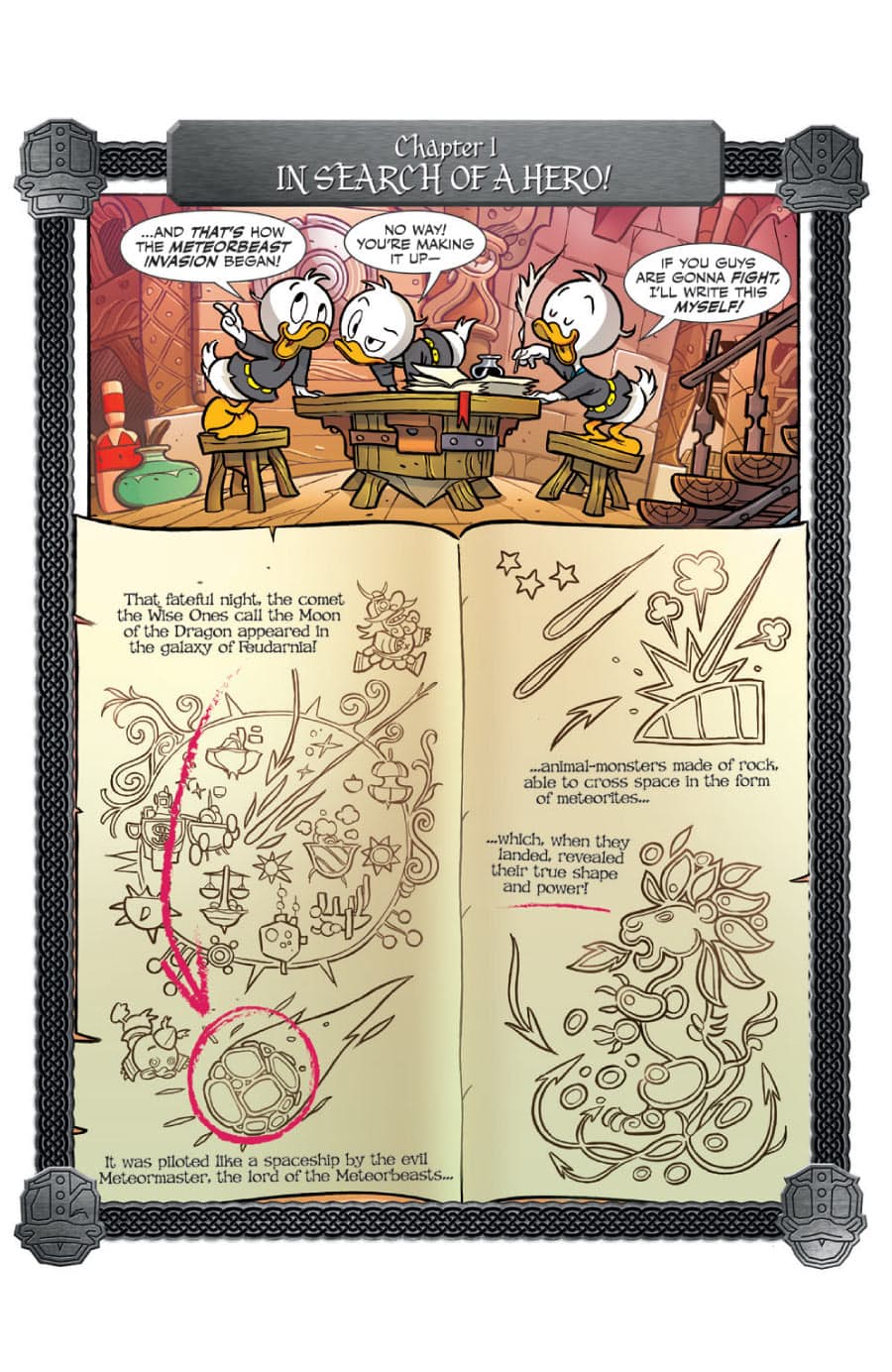 I will continue to read DONALD QUEST #1, mainly due to my belief in these creators’ potential to make this as wonderful as their past works, such as WIZARDS OF MICKEY. I hope the story will explore these characters more in-depth. I want to see more of their backgrounds and lives instead of pandering to fantasy trends. It’s the characters I want to invest myself in first, then the rest of the world. With this first issue, it was hard to do either.