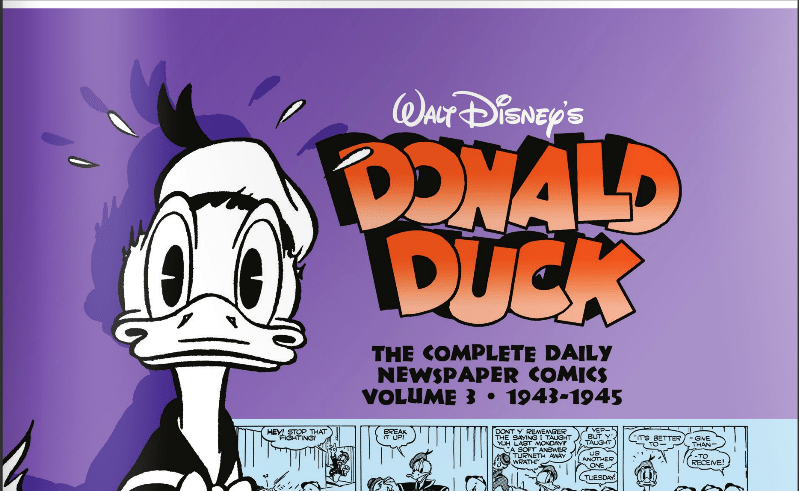 Have you ever wanted to get into the comics your grandparents read but weren’t exactly sure where or how to find them? You’re not alone. Finding old comics from decades before has always been a challenge for fans. Thankfully, publishers know your plight and over the years began compiling these old strips in volume books. One such book is the DONALD DUCK DAILIES series. In the newest release, VOLUME 3, IDW has compiled Donald Duck strips from 1943-1945.

This isn’t IDW’s first rodeo, though. They’ve done several of these compilation volumes in the past, most recently MICKEY MOUSE TIMELESS TALES: VOLUME 1, to varying degrees of success. Where other books shine though, DONALD DUCK DAILIES: VOLUME 3 falls short. It could have been an opportunity to show a dynamic range of Donald Duck comics that portray the fluidity of Donald’s character across decades. Instead, the book ends up feeling like a half-hearted archival work that looks great on the shelf but feels tired to read.

For comparison, MICKEY MOUSE TIMELESS TALES combed through Mickey’s history to provide a volume that had comics ranging from Mickey’s first appearances to his most recent. As a reading experience, it felt as though there was a larger purpose behind it beyond its role as an archival book. DONALD DUCK DAILIES: VOLUME 3, though, just feels like that exclusively.

It’s a very well-assembled archive work to be sure, but it feels as though it lacks a purpose. The comics, old as they are, have been restored remarkably well by Al Taliaferro and the rest of the team at the Library of American Comics. The lines are clean, bold, and well-rendered on the page. There are clear differences between the blacks, whites and grays, which you would mistake for a newly-drawn book if you didn’t know its age before-hand.

Then there is a wonderful introduction provided to give us some context about the world that Donald was living in when these comics were published. From it, we are given a clear historical lens to examine these comics through as we read them. It creates a more enriching read even if it does ultimately feel a little by-the-numbers at the end of the day.

On its own merits, it’s impossible to deny that DONALD DUCK DAILIES: VOLUME 3 is an expertly produced work. What Taliaferro was able to accomplish in bringing these very old strips to life again should not be discounted in the least. Next to IDW’s other Disney volume works, though, it feels like a weak entry that lacks a certain purpose. Sure, it’s nice to have a collection of old comics, but that pursuit feels more like a coffee table book than a truly engaging work. For a character with as storied a legacy as Donald Duck, a better book is deserved. Maybe that’s not what this book was supposed to be, and for what it is, this book’s a labor of love. In spite of this, DONALD DUCK DAILIES: VOLUME 3 just may not be the best expression of that love.