[spoiler title=’Minor Spoilers Ahead’ style=’default’ collapse_link=’true’]Please be aware this article may contain minor spoilers to THOR, and DOCTOR STRANGE as well as various Doctor Strange comics.[/spoiler]

It’s been a week since DOCTOR STRANGE was released in theaters, and now we find ourselves stuck in time waiting for the next Marvel movie to drop. DOCTOR STRANGE brought real magic, or rather mysticism, which was only touched upon in the first THOR movie. This element brought by the current film opens opportunities for other realities, giving us more goodies from the MCU. 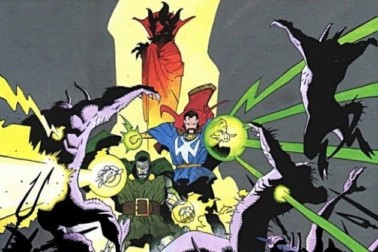 I want bring up something that confused me at the end of THOR: THE DARK WORLD, After Thor leaves, it’s revealed that Odin is actually Loki, who is alive and impersonating Odin. This left me to believe that they’ll take some influence from the story Thor: Blood Brothers, but we find Thor in the end of DOCTOR STRANGE asking the good doctor for his help to find Odin with assistance from Loki. It was never addressed on what had happened to Odin or if Thor found out that Loki was impersonating his father in any film. This is reminiscent of the comic, Doctor Strange & Doctor Doom: Triumph and Torment, where Strange helped Doctor Doom free his mother’s soul from the malicious Mephisto.

Like Doom’s mother, Odin used dark magic to send Thor to the Earth in the first AVENGERS. Odin’s disappearance could have been his comeuppance leading to certain events in THOR: RAGNAROK. In the mid-credit scene, Strange agrees to help Thor and Loki find their father. If that’s the case maybe we can speculate that they aren’t able to retrieve Odin, Like Doom’s mother, forcing Thor to take his place as the king of Asgard. But this is just one plot that the MCU could entertain.

READ: How Do You Tell an ‘Epic’ Story?

There’s the possibility of rebooting the entire franchise, but not anytime soon. The Eye of Agamotto is revealed to be the time Infinity Stone and it was stated that messing with time can disrupt the flow of time or create other parallel dimensions. Looking at things in the business side of things, the actors’ contracts may end or they may not want to play their roles anymore. So with that possibility, it would be easy for fans of the MCU to transition into a new era beyond phase four. The Infinity Gauntlet can bend space and time at will, so with Thanos wielding its power, it could change the Avengers roster for future phases; it could be the MCU’s version of the Secret Wars. Maybe by that time, Strange could create the Illuminati and then maybe get one of the most desired stories, Planet Hulk. There are many universes that the MCU could take influence from, such as Earth 1610 (Ultimate Universe) or Earth-91119, but not really.

READ: Why the MCU’s Future Depends on Doctor Strange and Thor Ragnarok

Kevin Feige has given us scattered bread crumbs to the future of the MCU, but he ensures us that many interesting things are going to happen. The interesting things that Feige may be covertly speaking about are the pairing up of individual titular heroes. That being said, THOR: RAGNAROK will definitely have Hulk, and Strange will be in the film too assuming for brief part of the film. Strange is also confirmed to be in AVENGERS: INFINITY WAR, and according to Slash Film, when Thanos arrives, Strange would have a hard battle against him, Feige responding “Only that you are correct. Yes.” We can only imagine the film opening only to find an epic battle between Thanos and Strange.

Introducing magic and other dimensions is a great move for Marvel Studios, and now we wait with great anticipation for the rest of phase three. With DOCTOR STRANGE out in theaters we can only sit and watch AGENTS OF SHIELD to hold us over until GUARDIANS OF THE GALAXY VOL. 2, set for release on May 5, 2017 in North America.

READ: Revisiting Guardians of the Galaxy