Sometimes, the best stories come from the heroes’ worst mistakes. In Marvel’s newest crossover event DOCTOR STRANGE DAMNATION, this couldn’t be more true. Every drama and injury is intensified by the fact that Marvel’s Sorcerer Supreme brought Hell to Earth. The story, while stranger than Marvel’s other crossovers, has provided a story that feels necessarily dark. I have enjoyed every moment of Strange’s sojourn through Hotel Inferno. The writing surrounding Wong’s gathered warriors stands out as a rising star in modern Marvel comics. This trend of potent storytelling continues as our heroes go to war with Mephisto’s corrupted Avengers in DOCTOR STRANGE DAMNATION #3.

After cheating in a game with Mephisto, Dr. Strange has been transformed into the newest Ghost Rider. Forced to attack his would-be rescuers, Dr. Strange’s only hope lies in Johnny Blaze, the original Ghost Rider. If Blaze can reach Mephisto and kill the demon lord, then Vegas will be saved. Meanwhile, Bats the ghost hound possesses Strange’s body and turns it against the demon horde. With so many pressing advantages, the Midnight Sons think the battle is won until a human Johnny Blaze falls from Hotel Inferno’s penthouse. With the world at stake, can our heroes save the day? Or will they be cursed to an eternity of damnation?

Possession of the Damned 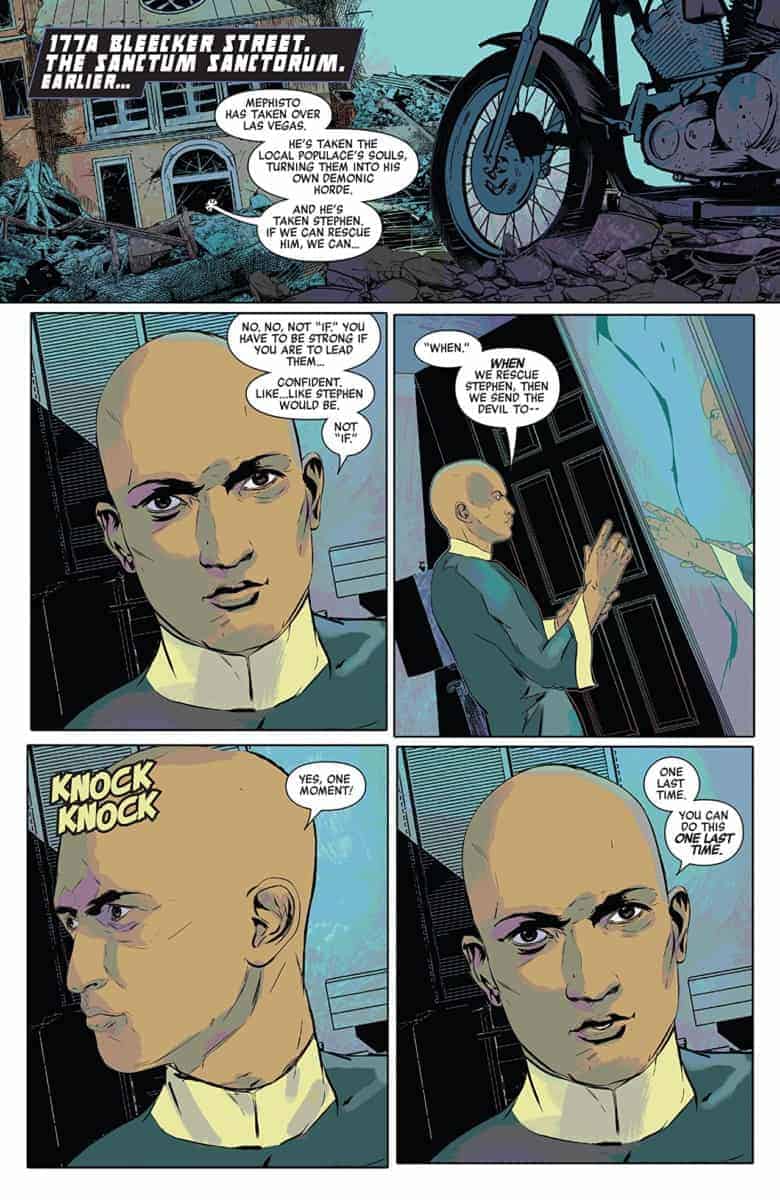 My biggest complaint thus far from DOCTOR STRANGE DAMNATION comes from its characterization. Writers Donny Cates and Nick Spencer have crafted a tale of immense dramatic tension, but they haven’t yet captured the essence of their huge cast. In complete fairness, this cast is massive. Any writer would struggle balancing this many working parts. However, DOCTOR STRANGE DAMNATION #3 sees these writers stepping in the right direction. The cast still feels a bit lopsided, with some characters getting the spotlight while others fall to the wayside. The heroes do have their moments to shine, though, and that is a real pleasure to see. This split focus works especially well considering that many of these characters are rather obscure. Seeing them here in modern tales feels like nerd heaven.

However, these writers excel at character construction in the lighter moments of this story. I know very little about Elsa Bloodstone, but her personality races forth as she mocks the established superheroes around her. Moon Knight, in seemingly lifting Thor’s hammer, has a moment of pure jubilation as he determines he’s no longer crazy. And Blade is just Blade, the badass vampire hunter. I especially enjoy the focused examination of Johnny Blaze and Wong, who play such key roles in this issue. Wong as the nervous, uncertain leader feels like a breath of fresh air in contrast to the sometimes egotistic Dr. Strange. Johnny Blaze’s determination especially rises up from the smoke. His role in the plan is both crucial and utterly impossible, so his agreement to go forward with it shows a side of the character that I’ve never really seen. 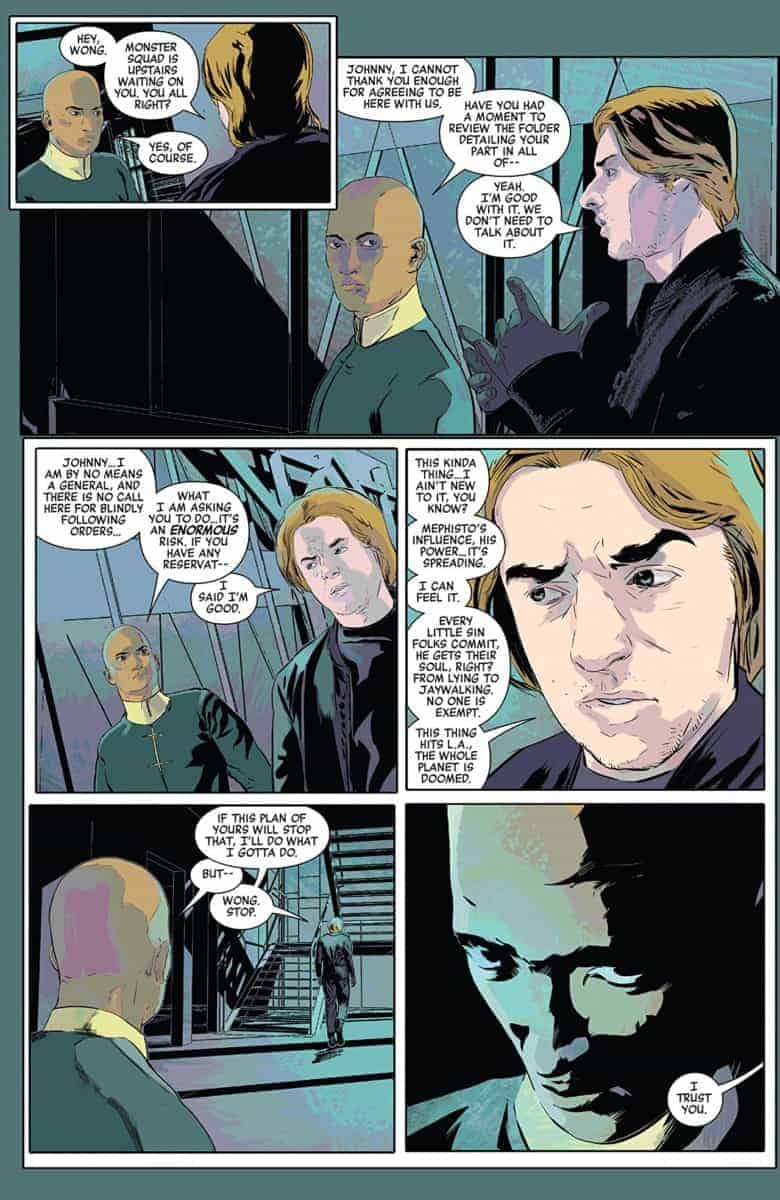 DOCTOR STRANGE DAMNATION #3 had a much stronger sense of pacing than previous issues. The events of the story come along at a methodical speed. The fight constantly rages around our heroes, but they aren’t always caught up in it. These slower moments allow the characters to come forth in new and interesting ways. More importantly, this story is just cool. The battle between the Midnight Sons and the corrupted Avengers has some incredible moments. The story comes across as entirely bonkers and heavy metal in the best way. When demon Thor makes it rain blood and Blade stabs her through the eye, it felt so satisfying. Sometimes, the best superhero stories aren’t about deep literary themes. Sometimes, you just need to throw the action figures down and see what happens.

My one issue with the plot comes from some of the lighter, comedic moments. While I felt that several were necessary and honestly quite funny, some of them felt out of place. The moment when Moon Knight tries to pick up Thor’s hammer is brilliant, as is Bats the ghost dog possessing Strange’s soulless body. However, other moments, like Ghost Rider kicking demon Black Panther between the legs, weren’t as well thought out. Sometimes these moments undercut the very dark nature of this story. It otherwise feels very atmospheric, something that other writers should take note of. But when this darkness is filled with bad puns and silly jokes, it loses its edge. When Spider-Man does it, it fits his character. When Ghost Rider and Blade do it, it sets things down the wrong path. 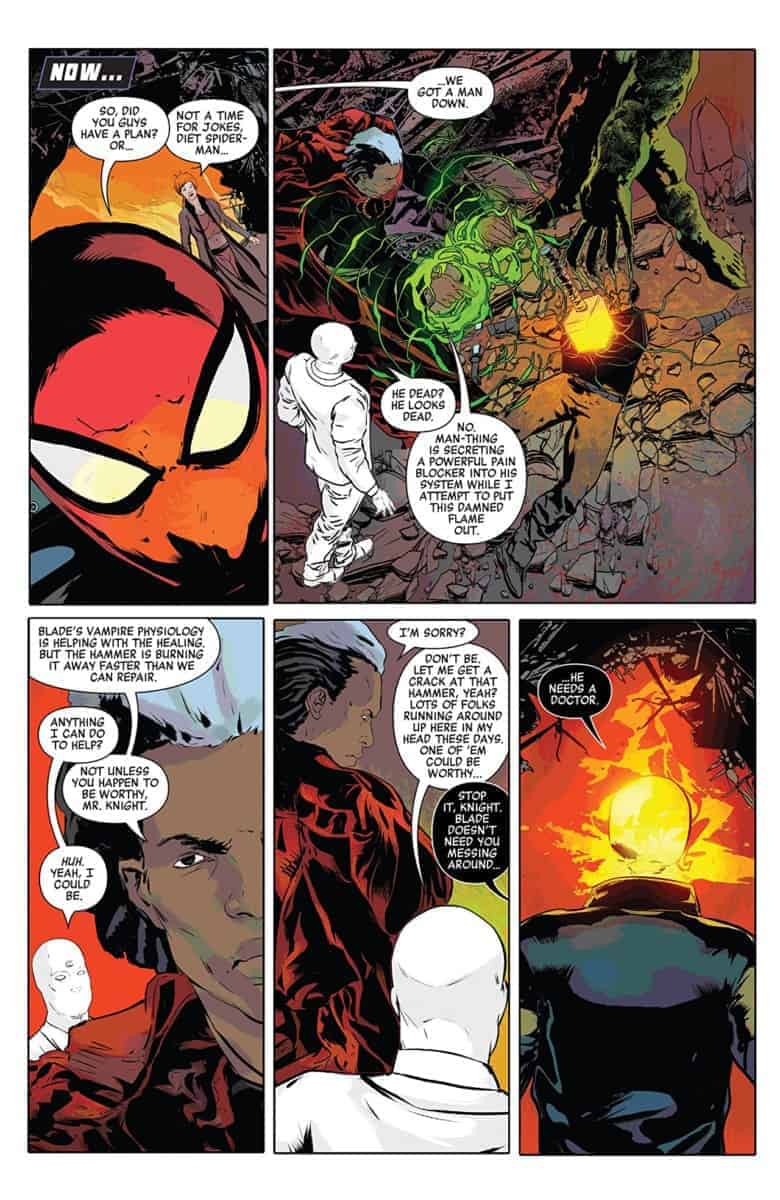 Szymon Kudranski is in charge of pencils and inks for DOCTOR STRANGE DAMNATION #3, and overall, his style adds to the already strong atmosphere. His portrayal of the monsters and creatures throughout the world of this story showcases his greatest strengths. His depiction of Ghost Rider may just be one of my favorites in comics. However, I am not as happy with his portrayal of the more human characters. While I recognize his talent, his realistic style sometimes produces some rather awkward looking faces and anatomy. He isn’t a painter but a linework illustrator, and sometimes his choice of lines doesn’t make much sense. This isn’t a constant issue throughout the piece, though it did catch my eye as strange. Otherwise, Kudranski’s depiction of Hell Vegas looks incredibly detailed, and his monsters are particularly terrifying.

Dan Brown covers the colors in this issue, and I have to pay a special compliment to his work. The Hellfire-consumed Las Vegas really limits his potential color palette to a lot of warm colors. His work had the potential of feeling stale or monochrome, but the subtle gradients throughout his work do a fantastic job of livening up the environment. I especially enjoyed the way the heroes stood out. Many of them, Moon Knight and Elsa Bloodstone excluded, utilize a very dark or cool color set in their costume. This means in the grander context of this evil realm, they come across quite clearly.

DOCTOR STRANGE DAMNATION #3 excited me as a reader. While not a deep story, the action sequences feel fun, and some of the events legitimately surprised me. In fact, much of the appeal of this story comes from the sort of action figure clash feeling. While some hiccups did occur in the artwork, the atmospheric feel of hellscape Vegas comes across perfectly. Pair that with an improvement in characterization, and DOCTOR STRANGE DAMNATION #3 works. It may not be the strongest comic book in Marvel’s current pantheon. However, it does entertain, which is all I can really ask for.