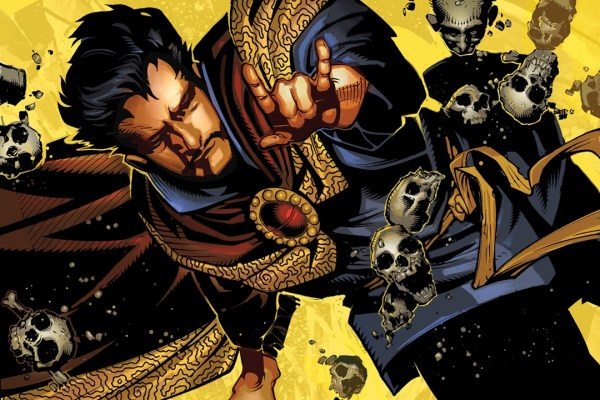 It’s been a long time since Doctor Strange starred in his own monthly title – but with the launch of All-New All-Different Marvel, Jason Aaron and Chris Bachalo have kicked a new series off!  How does it run?

DOCTOR STRANGE #1 opens with a simple enough story of the good Doctor paying a house call, going about his everyday business.  As the oddities increase in number even for him, he begins to suspect that the mystic realm is out of balance – that he hasn’t been “paying his bill” – and that, as a result, there’s a storm coming.

READ: How do we predict the ALL-NEW ALL-DIFFERENT MARVEL will do?

It’s a simple enough concept, but Jason Aaron writes it with skill.  He dives deep into the weirdness and wackiness of Doctor Strange’s world, opening with a battle in the soulscape of a nine-year-old boy.  One look at the book is enough to tell you why Marvel teamed Aaron up with Chris Bachalo on this project; Bachalo is clearly having the time of his life drawing for this book!  This is one of those occasions where the chosen writer and the chosen artist dovetail so perfectly, and where you get the sense that no other team could have quite pulled it off.  When Bachalo draws the Cloak of Levitation, for example, he does so in a way that I have never seen in comics before.  There are still a couple of moments when he struggles, though; Brother Voodoo’s face doesn’t quite seem right on occasion, for example.  Still, when you have a book with art like this, that’s a minor quibble: 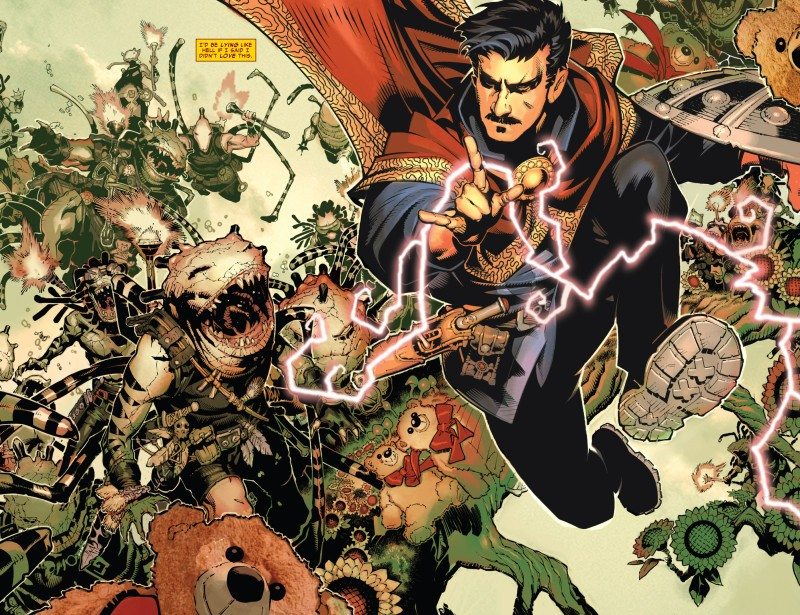 Aaron makes some pretty surprising background choices, though; this is a first issue that doesn’t even refer to Wong, instead using the Scarlet Witch, Shaman, Doctor Voodoo, and Monako as secondary characters.  If you haven’t heard of Monako before, don’t worry about it, neither had I; Aaron is, as always, happily indulging in his favourite habit of picking up long-forgotten threads in the tapestry of the Marvel Universe.  Still, this decision is an intriguing one, particularly as it helps to firmly establish Doctor Strange as standing supreme among the sorcerers.  I like the way Aaron fleshes out Doctor Strange’s world, with the Bar With No Doors seeming like a not-so-subtle nod to the Harry Potter franchise!

I’d just like to call attention to that intriguing choice of coloring, which is part of an overall scene in which only the mystic world is colored.  It’s a tremendously creative approach, and one that I hope will both be used again – and not over-used.  Touches like this help make the book stand out, but could easily be overdone.

In terms of characterisation, it’s worth noting that Aaron’s interpretation of the central character is an odd one.  Every writer interprets a character in a slightly different way, and Aaron focuses in on the arrogance of Doctor Strange, as well as his being a bit of a womaniser.  In all honesty, this is more like Doctor Strange crossed with Tony Stark than anything I’ve read before, but that comparison breaks down in a pleasant scene where Doctor Strange shows concern for the nine-year-old boy’s neighbour, asking the boy’s parents to make sure he doesn’t have a lonely birthday as a thank you to Strange for what he’s done.  Given that we’ve been reading Jonathan Hickman’s interpretation of Doctor Strange for the last few years, the contrast is a little bit jarring, and sounds like a slight off-note.  I’m sure that off-note will fade with time, though, as Hickman’s Doctor Strange is forgotten and Aaron’s takes centre-stage.

All in all, DOCTOR STRANGE #1 is the beginning of a run that is filled with promise.  Aaron and Bachalo are the perfect team for this kind of book, and I look forward to seeing what comes next!