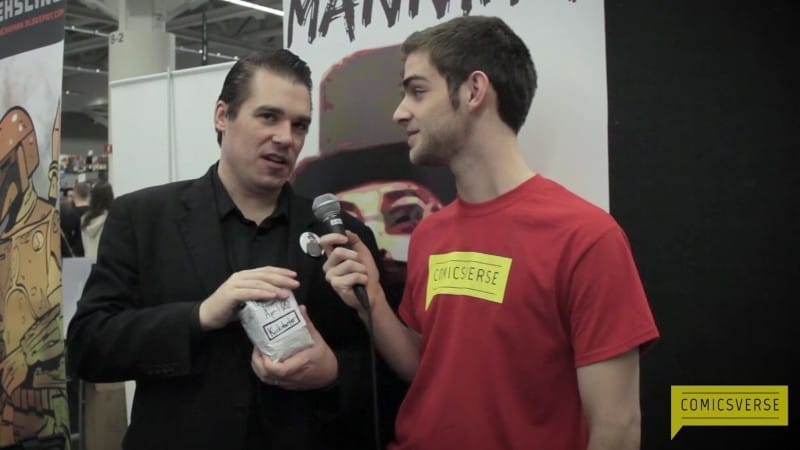 At Wizard World Cleveland this past weekend, Dirk Manning took the time to speak with Comicsverse about his career, his latest book, and his favorite convention memories. At his booth in Artist’s Alley, Dirk was more than happy to spill the secrets of the trade and his personal success stories.

Dirk Manning is the author of countless books. He is most known for TALES OF MR. RHEE, following the titular anti-hero battling demons (both inside and out) in a post-rapture world. Manning also wrote an advice book for writers called WRITE OR WRONG to try and help new writers break into the comics industry. He’s an accomplished screenwriter, as well, having written a two-part short for BlackboxTV on YouTube.

WATCH: Want more Dirk? We interviewed him at this year’s New York Comic-Con!

Humbled by the reactions to his book TALES OF MR. RHEE, Dirk touched on what it was like to have a following and find success with an original story. He even gave ComicsVerse the inside scoop on the upcoming Kickstarter for the next volume. Beyond that, Dirk gives advice to comic writers. He offers a couple of solutions, as well as promoting his book WRITE OR WRONG. Dirk also told us about his favorite convention memories, what it was like to go to his hometown and do a book signing, and what it was like to work with BlackboxTV on YouTube.

LISTEN: TALES OF MR. RHEE was the subject of a ComicsVerse Podcast! We delve into the story and more!

I had a wonderful time talking to Mr. Manning. Not only was he willing to talk about all his projects, but he also went into detail and gave me more time than I ever imagined. Any comic creator that is nice enough to spend ten minutes talking rather than chase sales on the floor is the kind of creator we need in this industry. Besides, Dirk let me smell his new specialized brand of coffee. Check out the video for more details.