To be honest, I had never heard of Dirk Gently until the new TV series was announced.

I didn’t get into Douglas Adams’ books when I was a kid (the only one I had at home was a later entry in THE HITCHHIKER’S GUIDE TO THE GALAXY series, and I refused to start at the “halfway point”), and as more and more time passed, he became one of those authors that was permanently tabled in my mind, even when THE HITCHHIKER’S GUIDE film was released in 2005 (which I still haven’t seen). So I saw DIRK GENTLY’S BIG HOLISTIC GRAPHIC NOVEL as my introduction to both Douglas Adams and his oddball detective creation. But it turns out, I might have been better off waiting until the premiere of DIRK GENTLY’S HOLISTIC DETECTIVE AGENCY this Saturday.

DIRK GENTLY’S BIG HOLISTIC GRAPHIC NOVEL is comprised of two volumes from different creative teams. “A Spoon Too Short” follows Dirk as he investigates the case of a family who has lost all form of communication, and is written by Arvind Ethan David with art from Ilias Kyriazis. Meanwhile, “The Interconnectedness of All Kings” is written by Chris Ryall with Tony Akins and Ilias Kyriazis on pencils, and sees our hero going up against copycat serial killers and reincarnated Egyptians.

While the cases at the center of these two books sound suitably mysterious and robust, they’re ultimately pretty thin. Most of the interconnectedness in “Kings” is so obvious (“souler power” instead of “solar power,” come on) that most of the volume feels like a wait for the characters to catch up to what the reader already knows, and something the book builds up to in the third act is so anticlimactic that even Dirk comments on it.

RELATED: Read another take on the first issue of “The Interconnectedness of All Kings”

In addition, the way each case progressed was a little predictable. This doesn’t apply to the moment-to-moment of each story of course, but in broad strokes Dirk spends most of the case being next to useless, and then comes in at the very end with an explanation for what’s going on, a plan to stop it, or both. You could apply a similarly simplistic approach to pretty much any other story, but here it feels like the creators tried to justify all the wasted space by having Dirk pull a rabbit out of a hat. 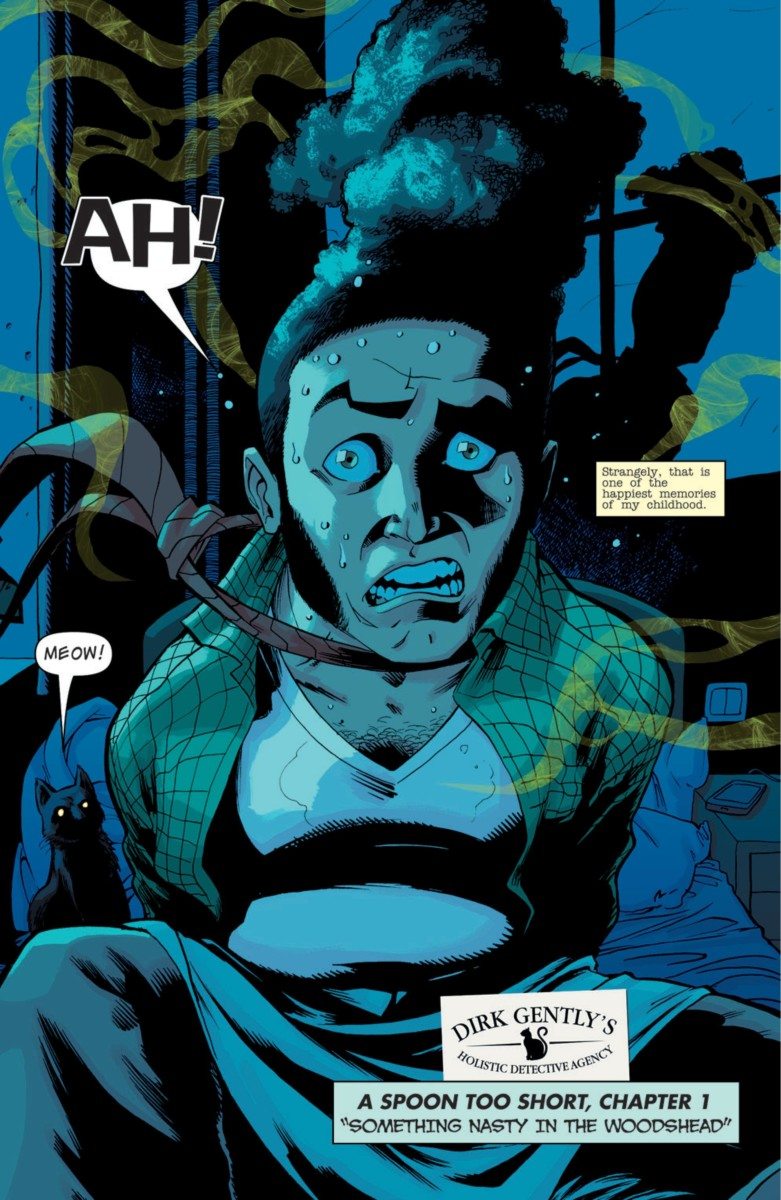 This wouldn’t necessarily be a problem if Dirk himself worked as a character, though. In both volumes, he’s pretty much your typical eccentric in the vein of other British staples like Doctor Who and Sherlock Holmes. He has his operating theory of the “interconnectedness of all things,” he’s arrogant, he thinks everything’s a clue (but doesn’t go looking for clues in the traditional sense), and he frequently interrupts other people with his random thoughts. But almost every time these aspects of his character are shown, they come across as contrived. At one point in “Spoon,” he insists on calling a flight attendant a waitress, which makes him seem more like a purposefully rude idiot than someone who insists on a set of rules for the world (“name follows function” blah blah).

The supporting cast doesn’t fare very well, either. Many of the characters are forgettable, and those that aren’t run the gamut in how well they’re handled. For example, Dr. Madluck is supposed to act as an intellectual foil to Dirk, but ends up succumbing to some of Dirk’s problems with forced characterization. And Agent Katie Schechter is characterized strongly by the joke she has to explain when she first appears, but doesn’t revisit this type of esoteric humor ever again.

The collection’s issue with characterization was particularly disappointing in the case of “A Spoon Too Short,” as writer Arvind Ethan David is one of the executive producers of DIRK GENTLY’S HOLISTIC DETECTIVE AGENCY. However, while reading the comic I thought that a performer would be able to clarify the tone of the material, David is obviously not the only voice on the project (Max Landis is the creator), and I already like Sam Barnett’s portrayal of the title character from the trailer:

It might have been beneficial for the comic book Dirk to have a permanent assistant like Elijah Wood’s Todd Brotzman. This would have given the books the opportunity to fully develop Dirk in relation to another character, and without as much of a need to treat Dirk as entirely “new” for the benefit of side characters (and us), the creators might have been able to avoid belaboring Dirk’s theory of interconnectedness, his disdain for Sherlock Holmes, and the “humor” of him correcting the people he works with when they call themselves his “associates” (not “assistants”). The humor of the books isn’t all bad—there are some fun panels, lines, and background jokes, including the first of “Spoon’s” references to THE LION KING—but too much of the comedy relies on Dirk being charming, or at the very least endearing, which is simply not the case.

RELATED: The Doctor never goes too long without a companion. Find out where your favorite ranks with our definitive breakdown of the new DOCTOR WHO companions

Another problem I had exclusively with “A Spoon Too Short” is how attention is drawn to certain plot details which could be problematic, as if to absolve the creative team if they are. [Very mild spoilers] Nurse Sally dresses up as a sexy nurse for Halloween (because irony), and she explains that she’s “drawing attention between the objectified concept and the reality.” A page later, we’re shown a profile of her butt (which Dirk is staring at), and a few pages after that, we get multiple shots of her cleavage as she treats Dirk’s injury. It’d be easier to make the argument that it was all for the sake of self-aware humor or her agency as a character if so much time wasn’t spent paying attention to her body.

Later on, when we first see Dirk and his “assistant-client” Tamasha in Africa, Dirk is wearing traditional Arab dress. Thankfully, Dr. Madluck calls him on appropriating another culture, but there’s still a sense of “why?” to it all, especially because Dirk doesn’t understand what he did wrong (he later calls Madluck a “cultural appropriation Nazi”), and he intrudes on Madluck’s explanation of why it’s wrong with lines that highlight his paper-thin “Hey, I’m an eccentric” characterization. Though the fact that he’s wearing Arab dress in the first place is still completely unnecessary, a genuine admission of fault here would have gone a long way toward making Dirk a more likeable character and demonstrating the importance of respecting other cultures. 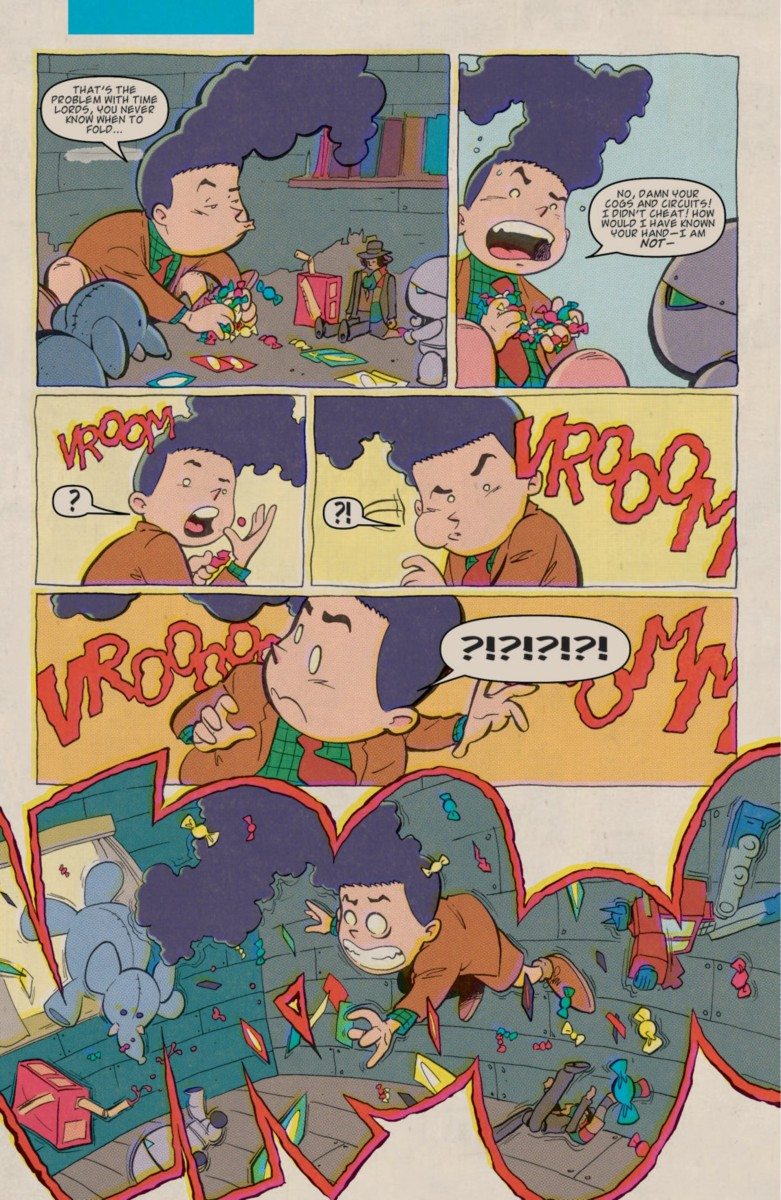 On the plus side of things, the visuals for “Spoon” work pretty well. Ilias Kyriazis’ linework and Charlie Kirchoff’s rich colors fit the story perfectly (particularly when Dirk makes his way to Kenya), and the use of a simpler, CALVIN AND HOBBES-style to depict Dirk’s childhood and the exposition sequences was a nice touch. (Due to some creative layouts, I had a bit of difficulty knowing how I was supposed to read certain pages, but this was entirely because I was reading right-side up on a computer, preventing me from seeing the full picture.) In comparison to “Spoon,” Tony Akins and Ilias Kyriazis’ pencils and Leonard O’Grady’s colors for “Kings” seemed to lack personality, with the colors and art being somewhat standard and dull.

DIRK GENTLY’S BIG HOLISTIC GRAPHIC NOVEL serves as a poor introduction to the Douglas Adams character. Not enough attention is paid to developing Dirk outside of him being an eccentric, with this having a ripple effect on every other aspect of the collection (though they’re not exactly substantial in isolation). A hard pass on this, and a reminder that DIRK GENTLY’S HOLISTIC DETECTIVE AGENCY premieres on BBC America this Saturday at 9/8c. Can you tell I’m excited?