The “League of Shadows” story arc in DETECTIVE COMICS has been interesting, to say the least. DETECTIVE COMICS #950 and 951 began another character-driven arc, this time focusing on Orphan. Unfortunately, since those two issues, the storyline fell slightly off track. DETECTIVE COMICS #954 broke up this arc even more so. With multiple situations getting in the way, it became difficult to feel attached to our star, Orphan. DETECTIVE COMICS #955, however, has brought the focus back to Cassandra Cain, reminding us that she’s the main protagonist here, and finally giving us someone to root for. 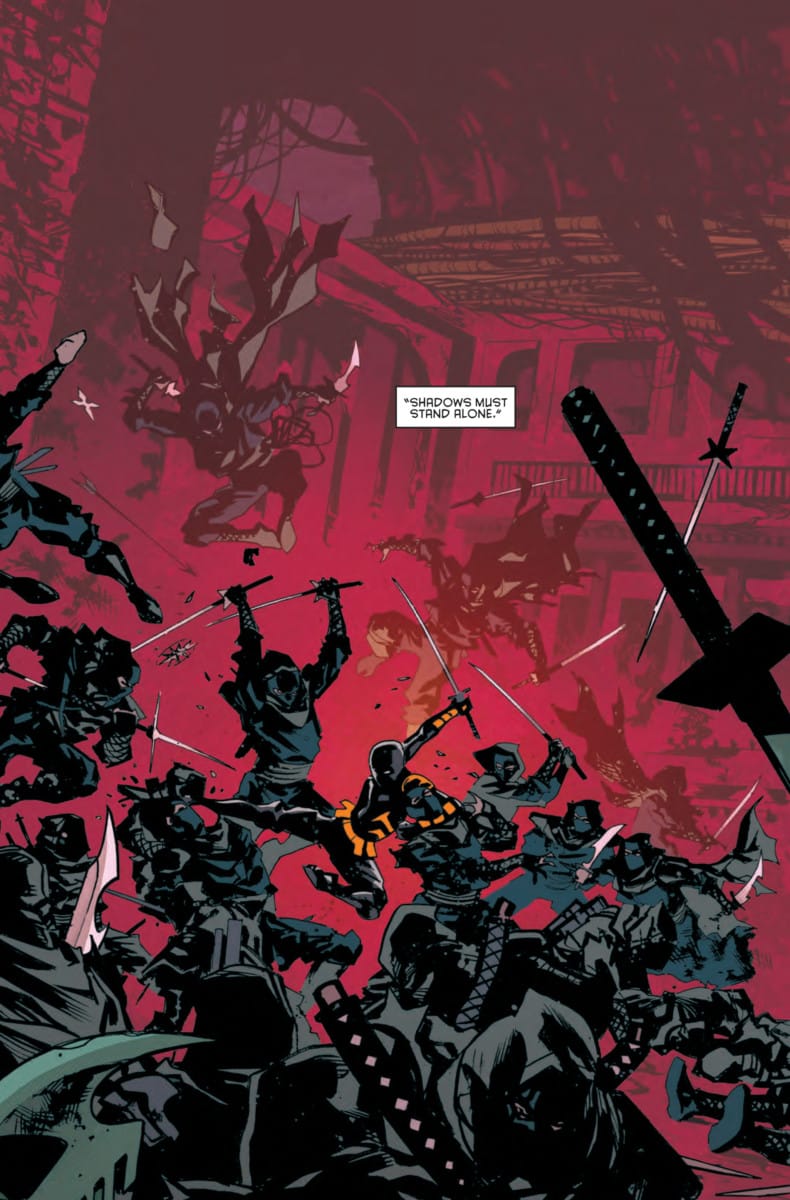 Cassandra Cain Steps Into The Ring

Writer James Tynion IV has done something very interesting with the DETECTIVE COMICS series. Since Rebirth, Tynion’s writing has embodied the “detective-mystery” aspect of the series, although he puts focus more on the characters than the actual plot. This isn’t to say the story of each arc is weak, but the character development is what shines the most in each narrative. In the first arc, we got to focus on Batwoman and Robin learning how to lead a team. For the second arc, we got to focus on Spoiler, and a little on Clayface, to see how their actions make them question their morality. In DETECTIVE COMICS #955 we get to focus all on the Orphan (Cassandra Cain).

Orphan being a closed book is what makes her an interesting character. We don’t know much about her, besides her origin. She’s quiet, and purposely so! She’d rather not have anyone know a thing about her. We have, however, learned in this arc the reason for that is she doesn’t know a thing about herself. It’s clever and unexpected because not much is thought of her character in this series, until now. Despite the “I was born a weapon” trope being somewhat played out by now, Tynion makes it refreshing by bringing in the weapon’s owner: Cassandra’s mother, Lady Shiva, the leader of the League of Shadows.

READ: Want to know all the details about the League of Shadows? Take a look at our review of DETECTIVE COMICS #954!

The League of Shadows Is Too Shadowed

Our last review of DETECTIVE COMICS analyzed the minor threat, which so happens to be the main threat of this arc, of the League of Shadows. We’re constantly reminded how threatening the League is, however it doesn’t feel as such. Our last review compared the League to the Court of Owls, and it rings true. Originally, we’re led to believe that the League of Shadows has been working in secrecy for however long. Whereas the Court mainly worked inside of Gotham, the League has, supposedly, been changing the world as a whole. Yet we never see this nor get any insight of what they’ve changed. I understand that they’re the League of Shadows, but their actions are too overshadowed by all their talk.

In DETECTIVE COMICS #955, we’re finally nearing the end of the arc. The League has captured Batman and his team, placed a bomb under Gotham’s fault line, and it seems no one can stop them. Nevertheless, I’m still more concerned with Jacob Kane and the Colony at this point. Especially with Ulysses now having access to the Red Robin suit! 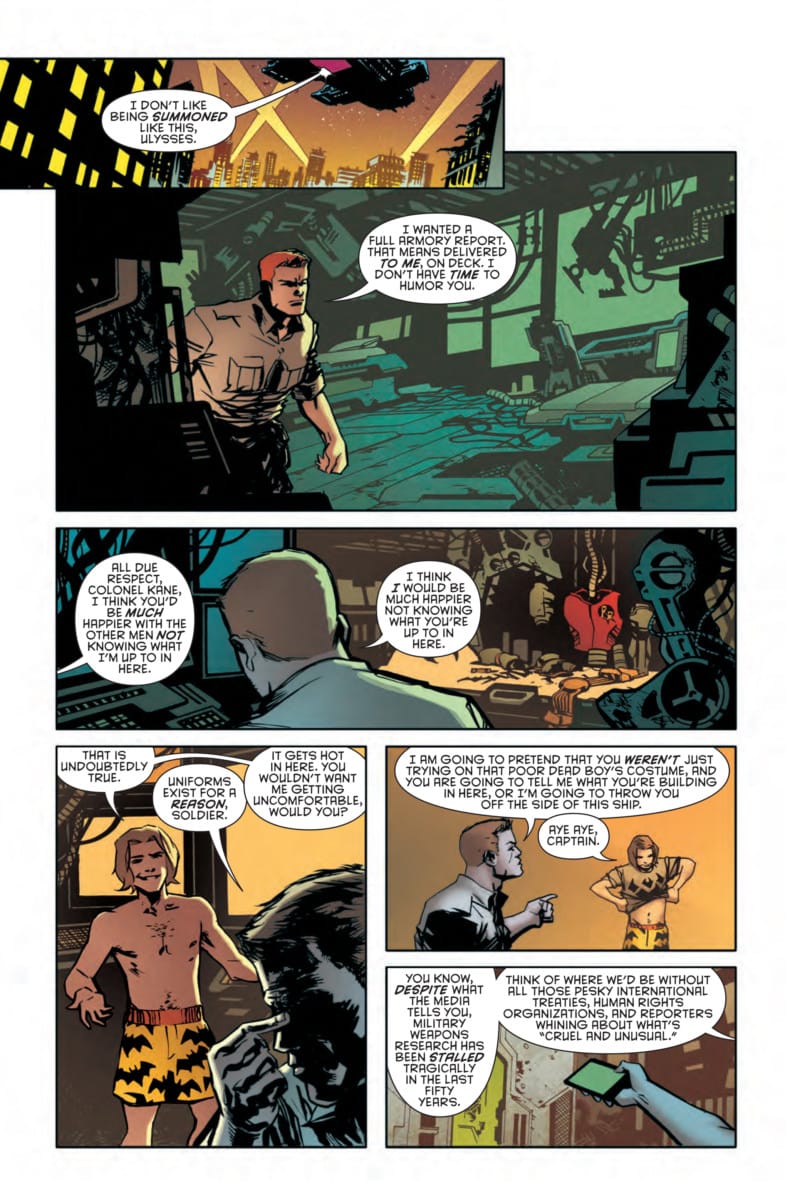 Unlike the League, we’ve actually seen the Colony take action. They “killed” Red Robin for God’s sake! The League of Shadows has done nothing near that level of intensity. They’re far more bark than bite. This is why I’d say we should be worrying about the Colony more than the League of Shadows. Ulysses has let his insane obsession with Batman get out of hand. Now, after basically being humiliated, it’s possible even Jacob Kane is slightly afraid of him. Plus, with access to Red Robin’s costume? That’s both morbid, concerning, and simply terrifying.

READ: Want to see more Batman team-ups? Take a look at our review of BATMAN #21!

Look At That Art!

DETECTIVE COMICS #955 features Marcio Takara as our artist, and the result is fantastic. Personally, I didn’t welcome Takara’s art with open arms last issue. It shook me, and I didn’t know what to think of it. In this issue, however, I found Takara’s art to be fantastic. Primarily, the fight scenes were simply epic. It truly created a large sense of scale for what Orphan was actually fighting. I got excited when I turned to the splash page and saw the countless numbers of enemies Cassandra was pitted against. I never got lost at what I was looking at, it only made me dart my eyes around in awe.

As We Near The End Of DETECTIVE COMICS #955…

DETECTIVE COMICS #955 has finally brought the focus of attention back to the star. James Tynion IV reminded us that he likes to center his arcs on a single character with this slow-burning match of an issue. With Marcio Takara’s epic art, we get to watch Cassandra come to a revelation that certainly gives us something to root for in this story arc. In the end, I actually don’t care what happens to anyone else except Cassandra — well, that’s not completely true. All in all, this issue has revitalized this arc and the League of Shadows definitely has something to be afraid of.