The “League of Shadows” story arc in DETECTIVE COMICS was built up as the centerpiece of writer James Tynion IV’s master plan. After two extremely successful character-driven arcs, the “League of Shadows” storyline began with a bang. Issues 950 and 951 kicked off with an intriguing exploration of Orphan, and a suspense-filled lead into the League’s first appearance. Unfortunately, since then the arc has devolved into something rather muddled. With DETECTIVE COMICS #954, the story has finally split in three completely different directions, each one with interesting moments, but without a coherent, focused vision. So far, “League of Shadows” lacks the exact ingredients that made the first two arcs so great. 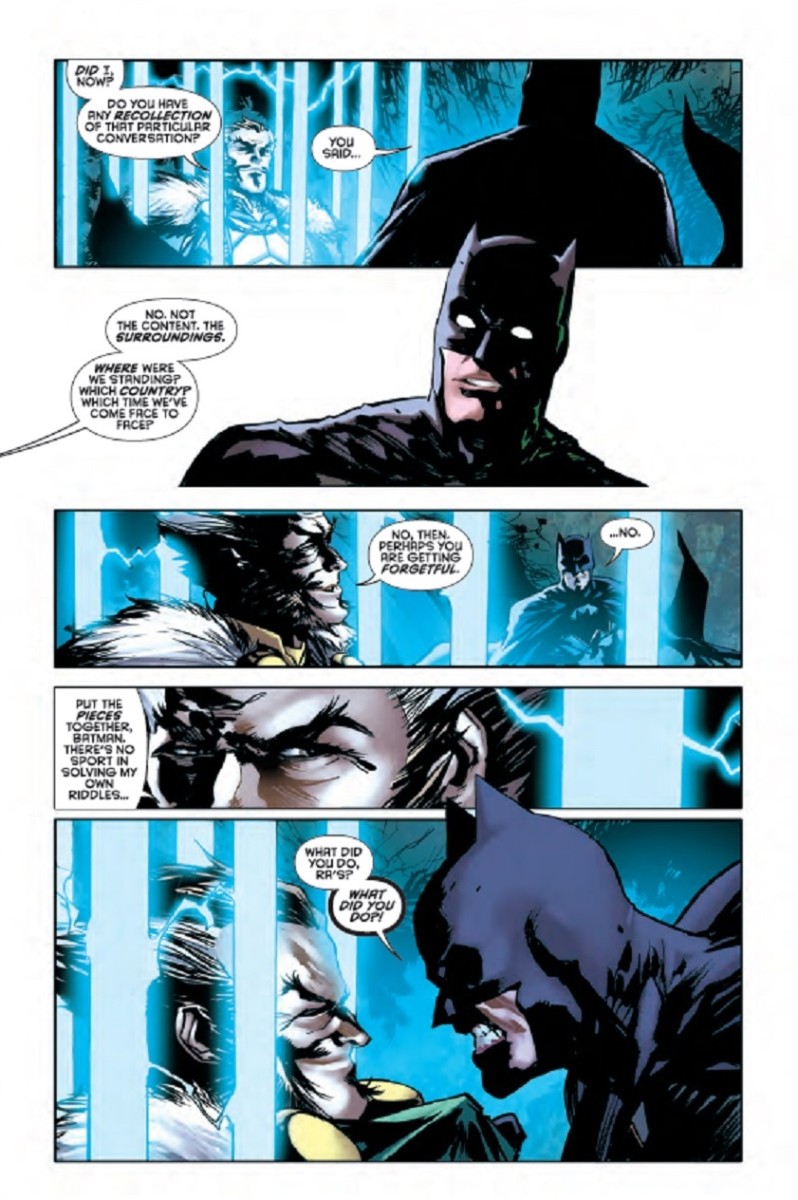 We open with Batman confronting Ra’s Al Ghul, who’s just invaded the Batcave. Batman is quick to subdue Ra’s, but the Demon’s Head has a few tricks up his sleeve. Ra’s informs Batman that the League of Shadows has gone rogue under Lady Shiva’s leadership. Surprisingly, Ra’s wants to team up with the Dark Knight to stop Shiva from wreaking havoc on the world. Meanwhile, Jacob Kane, believing his daughter Kate (aka Batwoman), to be dead, breaks out of Batman’s prison. Teaming up with his old Batmen squad, Jacob prepares for a retaliatory strike against the League — even if it means Gotham’s destruction.

There’s a lot of good stuff in here. It’s always interesting when someone gets the upper hand on Batman, particularly when that someone is master manipulator Ra’s Al Ghul. The Demon’s Head just loves getting under the Dark Knight’s skin. The revelation that Ra’s has actually been undermined by Lady Shiva adds an unexpected twist to the dynamic, putting the usually dominant Ra’s in a position of weakness. This is a great situation to explore, but it feels half-baked, because the supposedly dominant party here is Lady Shiva, and we still know next to nothing about her. It’s hard to feel anything at all for the new villain because, for the most part, we’re told how dangerous she is, but not shown.

READ: The League of Shadows struck at the heart of Gotham in DETECTIVE COMICS #951. Read our review here!

The same is true of the League of Shadows overall. We’re constantly told through narration from various characters that the League is an unbeatable threat, but we don’t see them do much of anything. They show up in their black ninja costumes looking threatening, while lengthy word bubbles describe their apparently fantastic conquests. Although, I do like the idea that Ra’s had Batman’s mind wiped every time the detective discovered the League’s existence. They apparently infused in him the idea that the League was just a myth. While this tactic makes sense, the intricacies of how Ra’s pulled it off are never explained, making it seem like a convenient plot device.

This arc reminds me so much of Scott Snyder’s “Court of Owls” storyline from BATMAN — a mysterious group, that may or may not exist, coming out of the shadows to strike at the heart of Batman and Gotham. Yet Snyder’s story was executed so much better. The Court of Owls felt like a living, breathing threat. The Court started as rumors, just like the League, but the legend of the Owls was fully fleshed out, made into palpable tales of darkness and power. The Court hung back in the shadows for a while, but when they struck, they took no prisoners. They nearly broke Batman completely, physically and psychologically. In the current storyline, we haven’t seen the League do anything remotely damaging. It’s not that the League of Shadows HAS to be like the Court of Owls, but if we’re supposed to be afraid for the very soul of Gotham, then damn it, we need to see the League do something impressive. So far, they just haven’t.

There is a compelling core hidden inside the “League of Shadows” narrative. When we first discovered that Lady Shiva was Orphan’s mother, there was a lot of potential for a great conflict to come. Yet so far, that potential has not been capitalized on. This brings me to my point about the three different story directions. Though it was assumed that Orphan was the central character of this arc, she doesn’t appear until the very end of DETECTIVE COMICS #954, making the issue feel meandering. The most distracting scenes are with Jacob Kane, as he breaks out of prison with the Batmen. These segments return to the plot threads that were developed in the “Batmen” arc, which would’ve been fine, but it’s been so long since we’ve seen some of those characters that their sudden re-emergence throws us out of the narrative. Each of this issue’s story threads are compelling on their own, but they feel so different in tone. Taken altogether, it’s like reading two or three different comics.

The artwork is particularly disappointing. DC Rebirth has an unfortunate habit of switching its artists halfway through a story arc. Sometimes the styles meld, but sometimes the differences are totally jarring. That’s the case here with artist Marcio Takara. His style is distinctly rougher and clunkier than previous artist Christian Duce’s. The characters don’t seem very lifelike here — they’re more like rough-drawn sketches. The figure-work seems incomplete, like it needed an extra layer of ink. Takara’s facial expressions are extremely repetitive. With Ra’s and Batman’s talk in the cave, their expressions are virtually unchanged in every panel. Batman always has a look of wide-eyed shock. Ra’s always wears a maddening, self-satisfied smirk. Their faces pretty much stay this way for thirty pages.

READ: BATMAN #20 sees the Dark Knight taking on his strongest opponent, Bane! Discover how their battle ends in our review!

Overall, DETECTIVE COMICS #954 is a disjointed piece of varying quality. The comic never feels like it’s quite sure what story it wants to tell. There’s some great interactions here between Ra’s and Batman, and the arc still has promise. The inevitable confrontation between Orphan and Lady Shiva should prove compelling, but for now, the “League of Shadows” storyline seems like its afraid to come out of the dark.