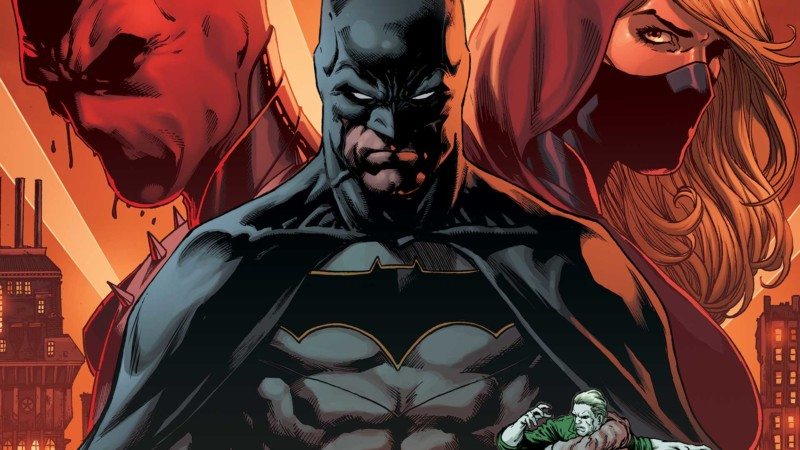 DETECTIVE COMICS has been remarkable in its characterization of Batman and his various teammates. Red Robin, Batwoman, Spoiler, Orphan, Clayface, and Batwing have formed the core of this team of misfits. Their dynamic has challenged the status quo of Batman as a lone wolf in fascinating ways. Writer James Tynion IV has also challenged the status quo with each of his story arcs. His “Rise of the Batmen” arc saw a militarized squad of Batmen, trained with Batman’s exact skillset, as a military answer to Gotham’s threats. This challenged the fundamental need of Batman. The current arc, “The Victim Syndicate,” challenges the need for Batman again: this time, by exploring the victims of Batman’s crusade against crime, the innocent civilians whose lives were destroyed in Batman’s countless battles. That arc comes to a head in DETECTIVE COMICS#947. The super-powered Victim Syndicate has been dispatched, but the team comes up against an even greater threat – the betrayal of Spoiler.

As the girlfriend of the fallen Tim Drake, Spoiler has lost perhaps more than anyone else. This is why the mysterious First Victim, leader of the Syndicate, came to her in the previous issue, offering condolences, and a counter to Batman’s view of the world. Now it’s clear that the Syndicate’s cries for justice were heard. Spoiler, arriving at the hospital where the Syndicate struck, takes down each member of the Bat team. Coming face to face with the man himself, Spoiler slams Batman’s methodology. She calls him out for his hypocrisy, for his blind dismissal of the victims of his crusade. Spoiler feels that Batman’s way is wrong, that it has contributed to the decay of Gotham and the birth of its villains. She believes that the Bat team could be better off leading lives of their own, helping the people of Gotham in more humane ways, rather than as sidekicks to a private vigilante. As Spoiler threatens to use Red Robin’s technology to reveal Batman’s identity to the world, the need for Batman is challenged like never before.

READ: Witness the spectacle of “Night of the Monster Men” in our review of DETECTIVE COMICS #941!

The idea of Batman’s war on crime negatively impacting citizens has been explored before, but never to the degree that Tynion has in this arc. By assembling a syndicate of Batman’s victims, Tynion has given a true voice to their plight. Though their methods have been cruel, allowing violence and murder, the strength of their arguments have had an impact on each member of the Bat-team, and on the comic’s readers by default. Spoiler taking the victims’ side lends even more credibility, particularly since we understand the devastating loss she’s endured. As far as the impact on Batman himself, it’s been dubious up until this point. Ever the silent knight, Batman has observed the Syndicate’s crimes, and heard their arguments, but kept his reactions minimal. Now, though, with Spoiler appearing to take their stance, it’s too much for Batman to keep quiet. With pressure from the First Victim and Spoiler mounting, Batman explodes – “Of course I’m not happy! I am sorry. I failed each and every one of you.”

In this moment, Batman confesses his true feelings, his doubts, and his raw insecurities – for allies and adversaries alike to hear. It’s the culmination of an attack on Batman’s methodology, and it’s an awe-inspiring moment. Tynion reminds us that Batman, though formidable, is in fact human, and he understands his own flaws, his own mistakes. Ultimately, Batman still believes his way is right. As the team is split, as sides are chosen, we are illuminated with a raw understanding of Batman’s methods unlike in any other comic.

The true genius here is in exploring Batman’s psyche through a team dynamic. Unlike Tom King’s BATMAN, which is more cerebral but also more obvious in its methods of exploring Batman’s inner workings, DETECTIVE COMICS takes an outside-in approach. The effects, as shown here, are tremendous. The team dynamic allows for each member to have their own depth of insight and reaction to the Victim Syndicate’s claims. Spoiler is touched by loss, acting out of grief, and shares their views. Batwoman is reminded of the actions of her father, and his role in Red Robin’s death, and understands the consequences of the Bat-mission. Batwing acknowledges his privileged upbringing and the deaths around him that he was insulated from, which prompted his desire to protect victims of crime. Clayface, most repentant of all, was himself a villain and destroyed the lives of countless victims, including Mudface, his former film assistant and now a member of the Syndicate. Each of them has a point of view that validates the Victim Syndicate’s existence but ultimately proves that their methods are wrong. The Bat-team acts in ways that are questionable, but they do it because no one else can.

READ: Uncover the tragic fate of Red Robin in our review of the climactic DETECTIVE COMICS #940!

The artwork by Alvaro Martinez complements the significance of these heroes with bold grandeur. Each character is given a seismic weight, with their own unique design and affectations. The Victim Syndicate, by contrast, blend in with the shadows a bit more, appearing almost anonymous. This choice is perfectly symbolic of their perceived lack of relevance in Batman’s eyes. The First Victim, meanwhile, is a blend of both approaches. He’s thin and spindly, barely taking up any mass at all. Yet he’s depicted in bold, blood-red coloring, always standing out as an unholy blemish on each page. He is the ultimate victim, anonymous in his size but unavoidable in his scope. The blood he’s soaked in is a constant reminder of Batman’s failure. These brilliant character designs have been remarkably consistent over DETECTIVE COMICS’ run, despite a rotating talent team, and it remains some of the best artwork in all of DC REBIRTH.

With Tynion’s deconstructive storytelling and deeply layered characterization, plus Martinez’s bold and effective art, this conclusion to “The Victim Syndicate” arc is an incredible payoff, fully exploring the psychology of Batman through the team he’s created. The final moments of the issue also provide tantalizing hints toward events to come, setting up the inevitable conflict with the Watchmen. With all of these elements, DETECTIVE COMICS has proven to be one of REBIRTH’s most complex and inventive titles, surpassing even King’s BATMAN, and we’re only two major storylines in! If these first two arcs are any indication, the legacy of Batman will continue to be unraveled in fascinating and unexpected ways.