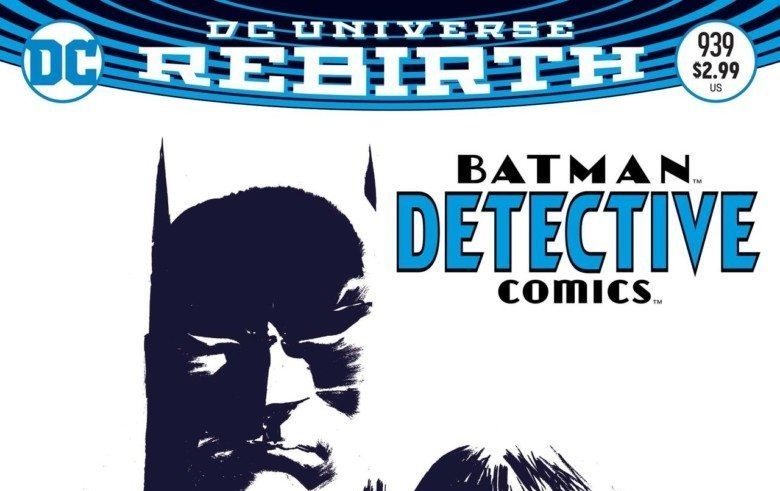 DETECTIVE COMICS has been delivering since the launch of DC’s Rebirth event, and DETECTIVE COMICS #939 is no exception. Throughout this story arc, writer James Tynion IV has been reflecting on the nature of the Kane and Wayne families, and while this issue does spend a significant amount of time on that theme, we also get quite a bit of character development for Tim Drake, aka Red Robin.

The issue opens up with a flashback that demonstrates the closeness that Bruce Wayne and Cassandra Cain shared when they were younger, the sepia tone of the artwork giving the memory an old-timey feel. It’s a sweet moment, and it really helps to establish the bond that the two cousins share. Truth be told, it’s this bond that ultimately leads Cassandra to side with Bruce in this fight against her father and his army.

READ: Catch up with our review of DETECTIVE COMICS #938!

It’s interesting that the Cain family seems to be breaking apart in this issue, as DETECTIVE COMICS #939 also foreshadows the upcoming departure of Red Robin from the group that has been built in these issues, and really, from the Batfamily as a whole. We’ve already known of his plans to attend Ivy University, but he confirms his intentions to actually retire from superheroics, preferring to use his intelligence to invent new technology and improve the world. 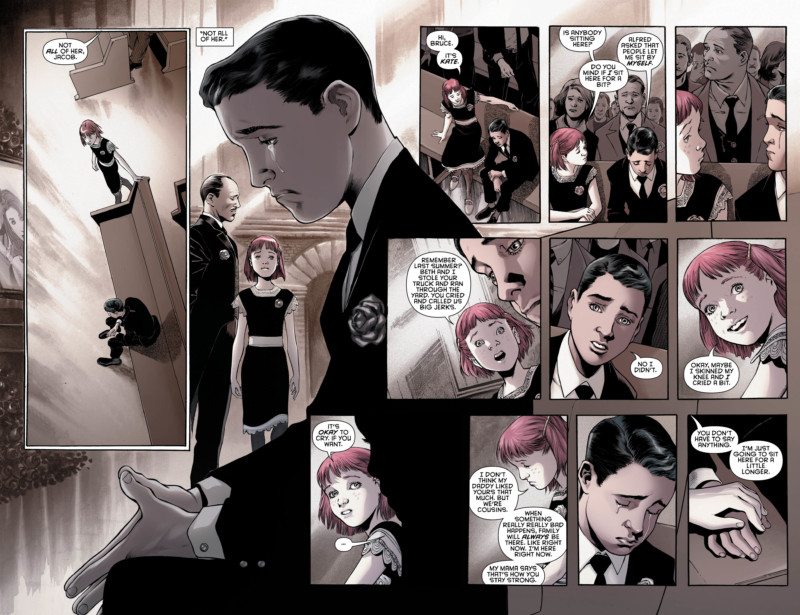 This issue really spotlights that intelligence. The Belfry, the Batfamily’s new, centrally-located base of operations, was designed by Tim, and he pulled out all the stops. He intends the Belfry to be his gift to the Batfamily before he leaves for school. As illustrated early in the issue, the Belfry is self-cleaning and self-repairing.  This is in addition to all of the crazy features we’ve already seen (like the Clayface-fueled training room). This is the kind of innovation Tim wants to provide to the rest of the world, which is admirable. Still, his intelligence certainly has a place in his work as a superhero; he manages to save Gotham in this issue, but the issue ends on enough of a cliffhanger that leaves Red Robin’s future actually somewhat unclear.

What would the Batfamily be missing without Tim? More importantly, what impact will Tim’s absence have on Batman? Obviously, the ease with which Tim is able to use and navigate computer codes is one thing that comes into use very often, but one could argue that Harper Row is almost as good with tech as Tim is. Therefore, Bluebird could be a suitable Red Robin replacement, but she’s currently hung up her tights as well. Keep in mind that we’re also gaining a new sidekick in Duke Thomas, whose full skills are yet to be developed.

I think Bruce would take it hardest (although, I’m sure Spoiler is a close second). The Batfamily as a group will continue to evolve. During the New 52 and even the first few issues of DC’s Rebirth event, the group expanded. Along with the old familiar faces and sidekicks, we now have Batwoman, Spoiler, Orphan, Duke Thomas, and Clayface on the team. That’s a lot of firepower.  No, the Batfamily will be fine. But Bruce?

To Bruce, Tim has been an equal in ways that no other sidekick has ever been able to be. Tim is the one sidekick whose intelligence rivals Bruce’s own, and at times surpasses it. As a combatant, he’s highly proficient, but as an intellectual equal, there was a value in the conversations and insights that the two shared that will not be easily replaced. Of course, Bruce has also said in the past that his hope was always to train his sidekicks to the point that they surpassed him and could move on beyond him. Maybe moving on from the vigilante life is exactly what he wants for Tim.

There’s no easy answer to these questions; we’ll simply have to wait until the next issue to see what happens. 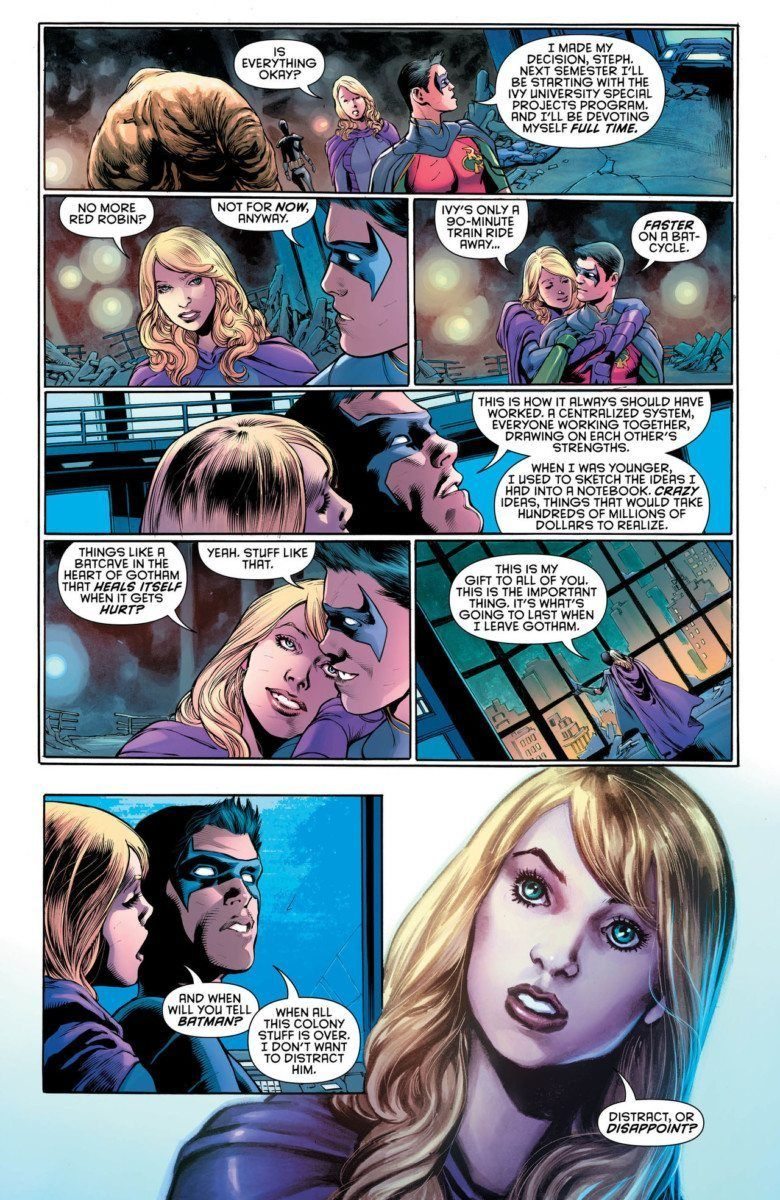 Great characterization aside, the art in this book, while looking fantastic, is strangely inconsistent in style. As mentioned before, there are some truly inspiring choices made for the layouts of the panels and pages. Anyone who wants to learn how to make a simple 3 or 4-panel page more interesting to look at, or maybe how to make a giant 2-page, 11-panel spread easy to navigate, this book is a great exhibit in masterful layouts. Unfortunately, I was distracted at times by the intriguing switch in art styles.

For the majority of the book, characters and details are represented in solid inks and colors, a pretty typical comic style. However, every now and then there’s a full panel, usually a large image, that is presented with a watercolor appearance to it. The sudden change in styles was a little shocking, enough to make me question the effect. Perhaps there was some intention behind it, but it was nonetheless distracting. Despite the seemingly random changes in style in the book, the art was great, delivering on some particularly emotional scenes by portraying the sadness or fear of the characters with an accuracy that will tear at your own heart.

WATCH: Our interview with James Tynion IV and Scott Snyder!

The bottom line is the same as it’s been for the whole run: the book is fantastic. While this issue wasn’t packed with action, it was filled with great characterization and important plot points that will clearly have an impact going forward. What the impact will be remains to be seen, but I recommend coming along for the ride. The art is always high quality, and the writing is compelling. For some of the coolest things to appear in DETECTIVE COMICS, you need to read this story arc. You won’t regret it.